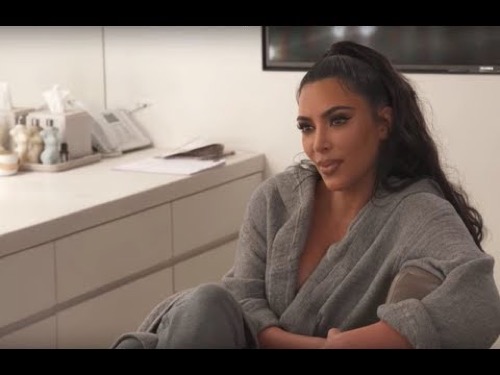 Tonight E!’s most-watched series Keeping Up With The Kardashians (KUWTK) returns with an all-new Sunday, September 22, 2019, season 17 episode 3 and we have your KUWTK recap below.  On tonight’s KUWTK season 17 episode 3 called, “Dishing It Out,” as per the E! synopsis, “Kourtney and Scott seek parenting advice, but Corey’s input causes an argument; Khloe plans a wine-tasting trip to Napa to check in with Kylie; the family is fed up with Kim’s new intense security protocol, so they take matters into their own hands.”

On tonight Keeping up with the Kardashians, the sisters visit a spa owned by Kimora Lee Simmons. Khloe and Tristan continue to work on co-parenting by attending therapy, but he feels that the family purposely made their breakup public, Khloe gets a text from Jordan woods to meet up and talk and she feels as if there will never be a friendship between them again. Kim suggests Khloe speak to Kylie first. Kris feels a way about Kim’s security at her house she feels as if she doesn’t have the clearance she wants to visit her by always being asked for id.

She wants to be able to walk around and pop up for her daily visits freely as she did before, Khloe reminds her it’s better to be safe than sorry. Khloe and Kylie do a press photoshoot for Kylies new skincare line and they plan a day together to wine taste at Nappa Valley, where Khole and to have her heart to heart with Kylie over the Jordan woods and Tristan scandal.

Over at Kourtney she begins to have challenges with Mason and his fighting at school she gives him valuable lesson on choosing to be mature in certain situations she lets him off the hook tho and allows him to attend a sleepover, but his father Scott Disick disagrees and feels he should not be at a sleepover and should face the consequences for his actions. Kris, Khloe, and Kylie go to Nappa for their wine tasting.

Kim goes to a plastic surgeon to try a new product which doesn’t require you to work out it’s a quick fix, Kourtney questions Kims security protocols and Kim feels as if it’s needed and it makes her feel safe due to so many armed robberies, and her Paris armed robbery ordeal. Back at Nappa Khloe finally addresses Kylie about Jordan and commends her for being calm during the situation and says she just wants her to be happy, Kylie feels like the situation needed to happen for a reason for her to grow and states she’s happy.

The family gathers to celebrate Jonathams name change to the “Food God”, Kim begins to address rumors of them stealing their spouses from others and calls French Montana to clarify rumors of him and Khole on her stealing him from ex-friend rapper Trina and he says that’s not true.

Kourtney reveals she doesn’t have a nanny anymore due to Penelope scratching her nanny in the face, Kris feels the kids are going wild and Kourtney needs to nip it in the butt now, Kris’s boyfriend Corey reveals he would discipline Scotts 6-year-old child physically and they get into a very heated verbal argument. The next day Corey tries to apologize to Kourtney and Scott but they feel as if he crossed the line and need space and time to talk to him again.

Khloe calls Kim with a security scare at her house her security team tackles Kris as she walks in the backyard, which it turns out to be an over the top prank. They had a stunt double pose as Kris and fake ambulance come to the scene. It was to teach Kim that the family needs clearance to visit freely without being asked if every time the visit Kim. Kourtney and Corey hash it out after the child discipline argument and he agrees to respect boundaries when it comes to Kourtney’s children. In the end, Kourtney and Scott come up with a better plan to come parent and discipline the kids.