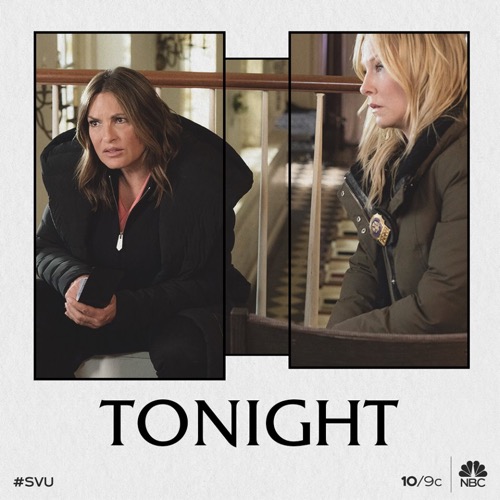 Tonight on NBC Law & Order SVU returns with an all-new Thursday, April 4, 2019 episode and we have your Law & Order SVU recap below. On tonight’s Law & Order SVU season 20 episode 19 as per the NBC synopsis, “The SVU investigates a he-said, she-said case when a woman crashes a wedding to accuse her therapist of sexual assault.”

A woman accused a man of rape at his own wedding. The accuser’s name was Kitty Bennett. She said Dr. Joshua Hensley was once her therapist and that she had gone to see him because her mother had just died and she had needed help coping. She was an only child and her father walked out on her when she was a kid. All she had was her mother and she couldn’t stop crying when she lost her. Kitty said she went to see Dr. Hensley after work one day and that meant it was after six. She opened up to him about how hard it been since she lost her mother and that’s when he offered a hug. The doctor had told her that the hug was normal and once he came over to sit by her that’s when she claimed he became aggressive. He began stroking her hair and then leaned in to kiss. It was after this kiss that he allegedly pulled her skirt up and ignored her pleas to stop as he raped her.

Kitty said that she hasn’t been the same since then. She called work the next morning to tell them she wasn’t coming in and she eventually lost her job when she refused to show at all. Kitty also admitted that she stalked the doctor on Instagram. She wanted to see what he was doing and that’s how she learned about his wedding. Kitty only showed up at the wedding because she said she wanted to make him feel as ashamed as he made her feel and that she just wanted the world to know. She didn’t think anyone would call the cops or that anyone would believe her, but Lt. Benson promised that she would help and tried to. Benson and the detectives of SVU investigated Kitty’s claims and they couldn’t have any evidence of it. There was no record of her being a patient with Hensley’s office and he claimed he never met her. He said the first time he ever saw Kitty was when she interrupted his wedding.

The detectives checked with his office. The records were all in pencil and so someone could have perhaps erased Kitty’s name from the records, but it was a stretch and the allegations didn’t seem as serious once the detective started digging into Kitty’s life. She has several arrest records on file and she stalked a man by name of Bo Albrecht. The two met at a cooking class and Albrecht said she has a nice souffle. He didn’t talk to her or thought anything would come of it and so it came as a surprise when she began stalking him on Instagram. She found out he was a trainer and sent him videos of herself in skimpy outfits working out. He tried to tell her that he had a girlfriend and she refused to take the hint. She continued to stalk him until he block her on social media and so that’s when she stalked his girlfriend. Kitty again used Instagram to send messages to this girlfriend and tell her how Albrecht was cheating on her.

The girlfriend had to block her as well and Kitty again refused to back down. She followed the other woman to work one day and that’s when the couple had enough. They got a restraining order against her and she stopped harassing them. She then went on to stalk Dr. Hensley and she reached out to his patients. Hannah Berkowitz had left a positive comment under Hensley’s photos and that’s when Kitty began sending her messages. She would ask to meet up to talk trash about the doctor and Hannah wouldn’t do it because she said the doctor helped save her life. Hannah messaged Kitty back once and was then stalked until she blocked Kitty. Making it twice now that Kitty has used a social media platform to get back at men and in one case it was against a man he turned down her advances.

The doctors went back to Hensley. He was asked about his relationship with Kitty and he reiterated that they never met, but he and his fiancée both mentioned several odd things that have happened over the past few months. Like someone creating a fake account on a dating app using Hensley’s name and sending the profile in an email to his fiancée. Then there was a time when someone broke into the couple’s apartment and poured tomato juice all over the wedding invitations. There was a record of this break-in and there was even a trail for that email as well. It led back to Kitty’s work computer and so the detectives went back to the woman. They questioned her about what they found and as they were talking to her she became sick. Kitty revealed that she just found out she was pregnant.

Kitty said she was willing to do a DNA test to prove it was Hensley’s. She said it happened after the rape and when DNA prove that he was the father – everyone believed that this was proof of the rape. Kitty didn’t want the child and she said she couldn’t wait to get an abortion. She told Benson that she couldn’t love a child of that monster and it made Benson think about her own ordeal. She was a product of rape and she lost her mother to a drinking accident her mother was never the same. There wasn’t a time that Benson didn’t feel like she was enough for her mother and so she took Kitty’s pregnancy hard. She tried to talk Kitty into waiting on the abortion as she thought things over and the woman didn’t want to wait. She said that she get rid of it after Hensley was arrested and he was, but it wasn’t for long. Hensley later admitted to an affair and he said that Kitty came up with the rape claim in revenge.

Hensley proved this affair with credible evidence and it was also corroborated with security footage. There was footage of Hensley going into Kitty’s apartment several times and that they had an affair. The police asked Kitty about it and she said the affair happened after the rape. She said that she tried to confront the doctor one day and that he claimed that she had been coming on to him. He said that she had a rape fantasy that stemmed from intimacy issues and that he could help her work through them. They began an affair shortly after that and Kitty said she only later realized that he was manipulating her. She tried to get the detectives to believe her and she could see that they had their doubts. It made her angry and she broke into Hensley’s apartment to confront him with a broken bottle. She wanted him to confess to the rape and she began shouting at him all that he told her.

It was the “intimacy part” and how he used that after the rape to justify what he did that got through to Lana. Lana was Hensley’s fiancée and she was once his patient. She stopped seeing him and a few weeks later he reached out to her. He remembered she was in real estate and said he was looking for a new apartment, but when she was showing him the loft, he became aggressive raped her. She didn’t know what was happening or how to absorb what happened. Lana was so confused that she actually drove him home and thought they would never see each other again when he came to see her the next day. Hensley used the crap he did on Kitty to manipulate Lana into a relationship and she didn’t see him for the monster he was until she heard from Kitty’s own mouth that this was a process to him. Hensley went after women that saw him for treatment who needed his help and he used therapy against them.

Lana woke up to what he was and she admitted that he raped her too. It had been enough for Kitty to put her weapon down and Hensley was arrested for two counts of rape. Both women had been put the ringer because of what Hensley did and it made Kitty realize that maybe she had been too quick to rush in to think about abortion.

Kitty took what Benson said and she tried to think of the child as only hers.

And while she knew it was going to be hard, she remembered her relationship with her own mother and wanted to have that again.