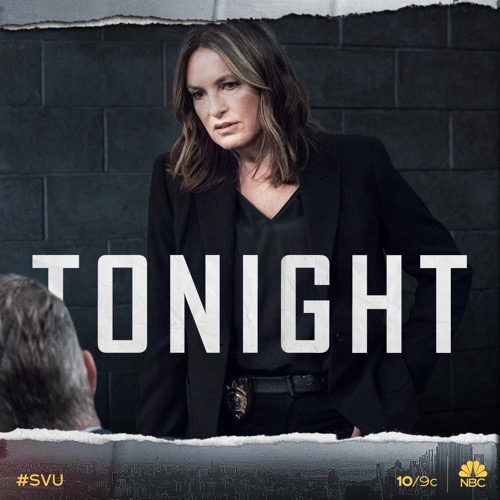 Tonight on NBC Law & Order SVU returns with an all-new Thursday, October 31, 2019 episode and we have your Law & Order SVU recap below.  On tonight’s Law & Order SVU season 21 episode 6 as per the NBC synopsis, “The case of a teenage girl assaulted in the projects leads to a startling discovery. Benson puts her trust in someone from her past.”

Benson ran into her brother. Simon hasn’t been around, and he didn’t even know about her son Noah. Yet, Simon was back because once again he needed a favor. He says he needs her help in finding his kids. His ex-wife took them, and he hasn’t seen them since he last saw Benson. Its been more than a few years now and so he was desperate. Simon really wanted to find his kids. He was clean now so that was no longer a problem and making amends was a part of his recovery. Simon wanted to apologize to Benson for everything that happened when they last met, and he mostly just wanted that favor so the apology was really because of that.

Benson agreed to meet with him, but her life as captain of SVU came first and her squad caught a case. The detectives were all called out to the projects where a teenage girl was raped. Lupe Perez came home from school because she had to watch her little sister until their mother came home and she was heading to the apartment when she took the stairwell. The elevator was out again so she didn’t have any choice in the matter. Lupe took the stairs and that’s when the rapist came behind her. He grabbed, told her to be good to Papi, and he called her sister by the little girl’s name,

This man threatened to hurt her sister as he was attacking her. Lupe was so afraid that meant he was coming back that she didn’t want to leave her sister and the detectives had to assign a cop to their apartment before Lupe was willing to be checked out at the hospital. Lupe had hated to go through the examination and she was only able to go through the whole thing because she had Detective Tamin at her side. Tamin was a project kid herself. She knew what it was like and she built up a relationship with the victim.

Lupe told her everything that happened. Tamin and the other detectives tried to work with what they had, but there was no close enough to the family that seemed like a likely suspect and the description Lupe given them had been vague. She said her attacker was either white or Hispanic and that he smelled of wood shavings. Then there was the DNA. DNA from Lupe’s rape kit had been a match for two homicides sixteen years ago in 2003. Two teenagers were arrested for the crime and neither of their DNA had been a match,

This DNA was accidentally entered into the system. The detectives working the old case had gotten a confession and they never bothered to test the DNA. It was modern logging that demanded everything to be tested that was responsible. This DNA indicated a third man and so Finn went to visit one of the guys that confessed in prison. Carlos Hernandez was son and brother to the victims. He also claims he was innocent. He said he only confessed because he was threatened with lethal injection and his friend had done the same.

In fact, his friend had done worst. Riccardo Torres flipped on Carlos because he wanted to get parole eventually and he still regretted what he did. He wrote a letter apologizing to Carlos for lying about him. He was released a little while ago and sadly he died from Aids which he developed in prison. Ricky went to his grave telling everyone that he and Carlos had been railroaded. There were plenty of witnesses if not the man himself and there was also the real perp. The detectives had found the real guy in the end.

His name is Tim Stanton. He was a handyman and he’s been raping teenage girls for the last sixteen years. There were other girls raped at some type of project housing or another. The detectives that destroyed Carlos’s life had thought he was good for those rapes as well and he never bothered to look for any other suspect. He simply assumed the two Spanish guys were responsible meanwhile the real perp was an overweight white guy. Tim Stanton knew the buildings because he worked on them and he tried to stop the detective from getting his DNA.

They had to collect it sneakily by scooping up something he touched. They then connected his DNA to three other rapes and got Lupe to ID him. She recognized his voice. She also wasn’t afraid to go on the stand and so Lupe as well as the three other project strong girls were willing to testify to Stanton being a pedophile rapist. Even with the knowledge of everything that was coming his way, Stanton refused to confess and he said that he wasn’t going to take the rap for the double murders. He even harped on how everyone knew Carlos was gay and so his lawyer shut him right after that because that meant everyone knew Carlos couldn’t have raped and killed his sister.

It also explains why Carlos didn’t want to reveal where he was when his family died. He couldn’t confess to being gay or he would have been raped in prison to the point where he caught Aids as well. Carlos wasn’t going to be telling anyone he was with Ricky that night. He could hamper his own retrial and with Stanton being so difficult – it was going to be hard proving Carlos’s innocence. There was also an issue with vacating because the District Attorney in that area was suffering from dementia.

Carisi and Carisi’s friend who happened to be an ADA in Queens had tricked the District Attorney into signing a letter to vacate Carlos’s sentence. And with Carlos freed, Stanton’s case took a nosedive and he realized it was better to go to jail for double homicide rather than raping little girls. Stanton confessed and he was going away for life.

Lupe now didn’t have to testify and Benson finally had time to herself to grieve. Benson’s brother never showed up for lunch and so she called him telling him to never contact her again. Then her brother died. He injected a bad batch and died. Benson didn’t know if what she said to him was the last thing he heard and so that phone call is going to haunt her for the rest of her life.