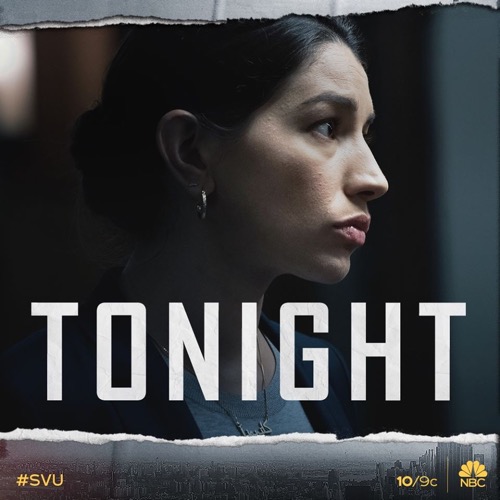 Tonight on NBC Law & Order SVU returns with an all-new Thursday, November 14, 2019 episode and we have your Law & Order SVU recap below.  On tonight’s Law & Order SVU season 21 episode 8 as per the NBC synopsis, “Rollins goes undercover to find a suspect who is drugging and assaulting tourists, while Benson helps the victims sort out their memories from their hallucinations. Starring Mariska Hargitay, Ice T, Kelli Giddish, Peter Scanavino, and Jamie Gray Hyder.”

A teen girl, Megan, is lost in the city when she runs into a woman who is willing to help her find her way. They end up in the West Village where the team begins to feel drugged. She wakes up tied to a bed with a CPAP mask on her. She begins to hallucinate. She calls for help and several people come in looking at her. Soon she is outside digging a hole as the people watch her. She manages to escape, dirty and hysterical.

The next day Amanda and Fin show up on the scene. The girl is rambling and terrified. They look around and find the hole she told them about. It was to be her grave.

Liv and Amanda meet up at the hospital where Megan has been brought. They think maybe she took a psychedelic.

Megan cries well she tells them about machine elves. Meanwhile, Megan‘s parents call the station and hear the news. Megan was attending a bachelorette party. Fin meets with Megan‘s friends who tell him that none of them did drugs.

Megan still isn’t making sense to Liv and Amanda. But judging by her story they manage to piece together that she took a ride on a chariot in the city.

They do some research and track down the business she was talking about. Liv is told by the doctor on Megan‘s case that her tox screen came back and she has several drugs including DMT and ketamine in her system. Her tox screen matches that of a girl admitted two weeks ago to another hospital who is now in a psych ward and has not been normal since. A short time after another victim turns up.

Amanda and Liv meet with the latest victim. Her story is very similar to Megan’s. She also has DMT and ketamine and her system and was raped. Liv’s superior suggests that they drive their latest victim around the city so that she can identify where she had gone that night. She manages to bring Liv to several places before remembering how to get to the building where she was raped.

They discover that the man who lives there is a therapist named Julius Adler. Fin and his partner head there. They talk to him. He plays dumb. Amanda tells Liv she once heard Adler speak at a conference and doesn’t see him as their purp.

The next day, Amanda goes to one of his lectures and pretends to be a student.

Adler invites Amanda to a study session at his home that night. She goes while the other stays nearby, listening to her wire. When they offer her drugs and the camera goes out, Liv and the others rush in. Later, Liv realizes Amanda isn’t herself.

At the station, they speak with Adler and his daughter who believes her father is a savior. They are now down to 1 victim since one is not stable and the other went back to her home country. They discover that one of the young adult men associated with Adler has worried parents who show up.

Liv questions Adler with Amanda. He tries to manipulate Amanda. Kat brings them information that Adler was married in 94’ to a woman named Kathy. The two never divorced so where is she they wonder. They locate her in a psych ward. Amanda isn’t so sure he is responsible but Liv thinks he is.

Amanda goes to talk to Adler. He tells her his wife was broken long before he met her. They talk further. He reveals that he helps broken young adults. Amanda pushes him. He calls her Kathleen. It is clear he is broken himself. He begins to yell. He wants to know who is out there. He climbs on the window. Liv and the others wonder if it is all an act.

Days later, Amanda pays a visit to Carisi. Adler doesn’t seem to be acting, she tells him. She tells him how at one pint when she was younger she almost followed him. Carisi tells her she dodged a bullet.

Amanda and Liv bring Adler’s daughter to see her mom. She didn’t even know she was alive. Their reunion is sad as the mother is confused.