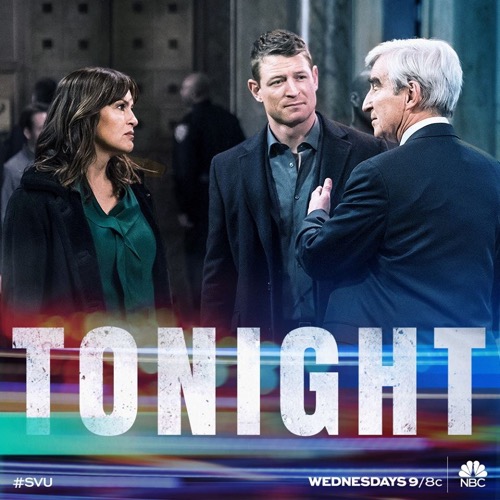 Tonight on NBC Law & Order SVU returns with an all-new Thursday, November 21, 2019 episode and we have your Law & Order SVU recap below.  On tonight’s Law & Order SVU season 21 episode 9 as per the NBC synopsis, “A fellow detective asks the SVU for help when he suspects his two daughters are being groomed by a serial predator.

A prisoner is in his cell. He watches a cock a roach crawl across his lunch plate. Seconds later he attaches a sheet to a bar and hangs himself.

Two months earlier – A teen girl runs into a woman and her dog. The woman invites her to a photoshoot the next day. The girl tells her she’ll have to talk to her dad, her mother is not in the picture.

The next day the girl goes to the photoshoot and the photographer is none other than the prisoner, Steve. He invites her to a glamorous party that night. She attends. From there she begins to diet, and dress older than her age. At a private photoshoot, Steve gets her to photograph topless. Ivy is very scared. He rapes her, giving her $100 before he leaves the room.

Ivy begins to attend parties and drink while spending time with older men for money. Steve asks Ivy to bring her little sister Millie the next time. She does. Millie is only 13.

Amanda is called to the precinct to meet Detective Bucci. When she arrives he tells Amanda that his daughters are victims of a predator, Steve Getz, a billionaire. He is hysterical. Ivy has taken off. They bring million to talk to her. She explains her sisters been acting weird and she thinks she’s been having sex. Cat tracks down Ivy. Cat tells Ivy who she is but pretends to be Ivy’s aunt to Steve and his assistant. She threatens Steve’s assistant telling her that she knows what’s going on and wants in unless they want trouble.

Back at the precinct, Cat informed them that she got an invite to Steve’s party that night. She arrives at the party, Ivy tells Cat that Steve smart and he’ll figure it out.

When Cat goes in, there is no party. Steve’s assistant pulls Cat aside and gives her $10,000 finders fee, telling her that IV should return tomorrow alone. Cat tells her she’s a social worker at a Catholic school and knows a ton of girls that Steve could help. The assistant is very interested.

They bring the case to Carisi who tells them they don’t have enough proof. They need one of the girls to flip. They need to catch him off guard so Amanda and Liv track him down at a steakhouse while he is in the bathroom. He is very cocky and doesn’t seem phased by them taking him to the precinct.

Liv and Finn interrogate Steve but don’t get anywhere with his lawyer sitting there. Amanda comes in to interrupt, Bucci is at the hospital and has been attacked.

They arrive at the hospital Bucci tells them that he was assaulted by two goons, must’ve been one of Steve’s guys. In the hall, they run into Ivy who is very upset that they got her dad beat up.

Amanda talks with Milly who shares that her mom is in rehab. Down the hall of commotion a erupts, Bucci is getting dressed and ready to leave he doesn’t care if he gets a scan. He wants his gun and he’s going to take care of Steve. Ivy agrees to testify.

The team gets a search warrant and head to Steve’s house. Amanda finds a collection of risqué pictures of the young minors.

At court the next day, Carisi calls Steve a flight risk. The judge agrees. He is placed in protective custody. After court, Steve’s lawyer tries to make good with Carisi who doesn’t want to speak with him at all.

Liv gets to call from Carisi, Steve cut a deal for four years in prison. They tell Bucci the next day but he is furious. That’s not enough.

Bucci forces them to go to court. The judge doesn’t see Ivy is being raped but having consensual sex. He lets Steve out on time served.

The next day, Ivy and Millie go missing. The team head to Steve’s boat where they are partying in celebration of his victory. When they demand the girls come off the boat, their mother appears. She gave them permission.

Bucci breaks into Amanda’s private therapy session. He has her gun from her glove box and he wants Steve in jail. He isn’t leaving.