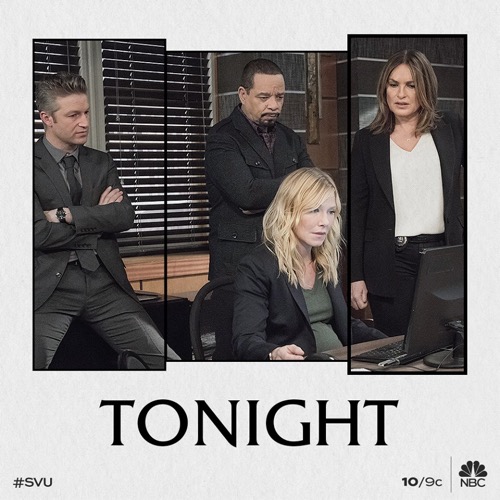 Tonight on NBC Law & Order SVU returns with an all-new Thursday, January 10, 2018, episode and we have your Law & Order SVU recap below. On tonight’s Law & Order SVU season 20 episode 11 called “Plastic” as per the NBC synopsis, “A woman accuses a celebrity plastic surgeon and his girlfriend of rape.”

Ava Parcell was found half-dressed and crying. She had been out wandering the streets for help and someone luckily called her an ambulance, but one of the things she said before she was checked over was that she had been raped. Ava showed minimal bruising and there had been semen found in her rape kit. There had also been drugs in her system and so Ava needed to go through detox before she was clear-headed enough to answer questions. The first question was if she took those drugs of her own accord and Ava denied it. She said she had never been a hardcore partier and that she just had a few cocktails at a friend’s party when she began feeling unwell. And going to the bathroom was one of the last things she remembers.

The rest were just pieces. Ava recalled being tied down and that there had been two sets of hands all over her, but she never consented to sex and with all the drugs in her system, it would have been hard for her to even speak much less be a coherent partner. So the police did believe that it was a rape and with what they heard they suspected that it was a couple that raped Ava. Ava gave them her friend’s contact information and they checked with the hostess if there was a couple that stood out. It turns out one couple had come with an expensive bottle of wine and so the detectives traced the wine back to Dr. Heath Barron and his girlfriend Sadie Parker. The couple was rich and famous. And there was no reason why they would have been at that party.

The detectives showed pictures of the couple to Ava to see if she could remember anything and she did. She remembered that Sadie had checked in on her when she went to the bathroom. The other woman said that her boyfriend was a doctor who could help and had even offered Ava a sip from her water bottle before they both went outside for fresh air. Ava had thought at the time that this woman was being kind, but it seems to have been a means to lure Ava out alone and unfortunately, Ava fell victim to it. She went with the couple for help and then she was victimized. Ava identifying the couple was enough for the police to go question the famous pair and of course, the first thing the couple said was that it was consensual.

They said that Ava had tried threesome in college that she hadn’t liked and that she wanted to try again with them. Both Barron and Sadie repeated this story and so they had to check with Ava. Ava was asked if she could have consented and forgotten about it though Ava said she wouldn’t and that she could do drugs much less offered it to anyone else. The couple had claimed that Ava had offered them drugs and that they denied because that wasn’t their style. So the case soon became they said/ she said. Ava still claimed that she was raped and so the detective began building a case. They got a search warrant for the couple’s home and that’s where they found videotapes. There were tapes of Ava and several more with all of the third parties passed out while the couple raped them.

The home was also a drug den. The good doctor had a cupboard full of drugs and some of it could have been used to render his victims unconscious. The home was built for rape and so the couple was arrested. It wasn’t long before they lawyered up and despite that, they didn’t change their story. They claimed that everyone consented and the victims from each video were brought in for their opinion. It surprised everyone when these women were asked about the tapes and all claimed that it was consensual. They said that they liked taking risks and that they were just having some fun with the couple. As for the couple, they later did a tv interview about how Ava was some misguided girl who got embarrassed the morning after.

The rape wasn’t what embarrassed Ava. It was being named on television and having all of the social media call her a prude who was after money that embarrassed her. Ava didn’t want to go ahead with the case once her name was out there and she told Benson to call the whole thing off. She said she didn’t want to live with it hanging over her head and if there were other victims then they could be the one to testify because she wouldn’t do it. Therefore, the detectives of SVU continued their investigation by contacting everyone in the tapes and that’s how they found CeCe Taylor. CeCe was fourteen when she disappeared. She was last seen being featured in that video with a man who didn’t show his face and so the detectives had a reason to believe that that man was Barron.

There were some medical books in the video and so it could have been taped when Barron was at medical school. The detectives went to the school and they found someone there that remembered Barron. Barron was young and arrogant. He didn’t like rejection and the girl he was trying to pursue at school kept turning him down. It must have made Barron angry that he could only have a girl that couldn’t keep up with (because she was a child) and so he could have hurt CeCe. The Cece in the video was at a house that her father wasn’t familiar with and that made it Barron’s place. He rented a house near campus and, after some digging, the cops found a skeleton in the walls. The cops thought it was CeCe when they first found the remains and they had been wrong.

It hadn’t been CeCe. It had been someone else and so Barron was involved with quite a few things. The detectives didn’t believe that Sadie was involved with the body they found at the house because it had been Barron’s place and so they confronted Sadie with what they had on her boyfriend. The sane boyfriend that had probably used another runaway to create the perfect girl and when he couldn’t he killed her. But he didn’t kill CeCe. CeCe was actually given plastic surgery and became Sadie. Sadie owns a successful business and was beautiful. She was just the sort of girl that a man like Barron thought he deserved and so they used the fact that Sadie was his victim against him. Barron had the lawyer and Sadie did not.

Sadie was reminded that she had parents who never stopped looking for her and that she had a child when Barron “found’ her. She later admitted that she had been at a party when a girl named Moira approached her and offered to help. Moira took Sadie to Barron and then Barron killed Moira. It was Moira behind the wall. She was tossed away when Barron found someone that was even more beautiful than her and then he turned CeCe into his perfect creation. He raped and manipulated her into she turned into Sadie. Only Sadie wasn’t quite enough either because each girl they found and drugged as a repeat to what happened to Sadie/CeCe was a way for Barron to look for a replacement.

Dr. Barron was never going to give up trying to find someone who reached his unattainable standard for beauty. Once Sadie realizes this, she gave up everything and admitted that they drugged Ava. She didn’t think of it as wrong because she was going with what Barron wanted and thought he found her beautiful. So she confessed to the rape and was later reunited with her father who was just so happy that she was alive that he didn’t care about the rest.