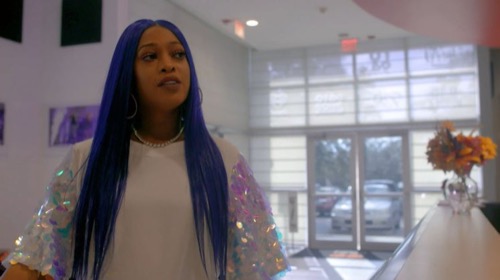 Tonight on VH1’s hit series Love & Hip Hop Miami returns with an all-new Wednesday, January 2, 2019, episode and we have your Love & Hip Hop Miami recap below for you.  On tonight’s season 2 episode 1, “Take It To The House,” as per the VH1 synopsis, “Trina and Trick take the stage as TNT to perform a classic. Amara deals with struggles at home and the price of fame. Gunplay and Keyara hit a crossroads in their relationship. Newcomer Jessie Woo arrives on the scene.”

Trina was putting the final touches on her latest album. She’s been considering life outside of music and has been experimenting with becoming a business owner, but she never forgot about her music. Trina was still serious about it and so it was Trick Daddy that was upsetting the flow. He wasn’t carrying his weight and Trina found herself having to do everything.

She knew that she couldn’t exactly walk away from Trick because if she did then she would be labeled the difficult one and so she wants to give Trick on more chance before she’s forced to drop him. It was one thing if he wasn’t interested and it was another if he was letting his personal life come in between him and a musical partner.

Young Hollywood meanwhile had been focusing on himself. He said his head was a turnaround in the past and walking away to focus on what was best for him had been a big help. YH even met up with Gunplay for some Spanish food and the two got to talking. Gunplay had gone to rehab and he had got clean, but he was still out here risking his life because he’s been DM’ing another woman.

He said that he wasn’t getting the emotional support that he needed from Keyara and that’s why he went looking elsewhere. Only he also mentioned how he still sees Keyara as the woman he wants to marry and so he knows he needs to stop what he’s doing on the side if he wants his relationship to work.

Then there was Amara. Things were finally looking up for her and her career has been on the rise for the past year. Amara was up onstage and enjoying the limelight when something happened back home. Amara’s mother called her in a panic several times before Amara could call her back and by then Amara knew that something must be wrong, but it turns out her mother badly injured herself.

She had lit a candle and forgot about it. That caused a smoke buildup and Amara’s mother decided to douse the fire by grabbing the candle by the hand. She ended up badly burning her hand and she really should have known better. It also didn’t make sense why she would call her daughter back from New York when there was nothing that Amara could do and that would just worry her.

Jessie Woo was close with her mother as well, but somehow the candle incident didn’t seem like something Mama Woo would do. Mama Woo was a strict Haitian mother and was deeply involved in the church. The other woman did her best to keep her daughter grounded and, while she was happy that Jessie came back from New York, she hadn’t called Jessie to her side.

Jessie had come on her own. It was hard to make it in New York and the stress had eventually gotten to Jessie. But she was with her mother now and seems happier for it even if it meant the only place she could truly express herself was now in the church. And so it’s interesting to see how the parents react to their children becoming really famous.

Prince Michael Harty had been with his dad when his friends stopped by. Miami Tip and Bobby Lytes had been great to his dad and Prince had no reason to suspect that something was up though there had been an issue. Bobby had been upset and he wasn’t sure about what to do with Prince. Prince had taken his hat and run off when they were together. So Bobby chased him and ended up falling.

He hadn’t liked what happened and he told Miami that he’s been discussing the situation with Jojo. Jojo allegedly told Bobby that Prince is a user who’s only using Bobby for his connections and wasn’t his real friend. And so Bobby said that she might be right to his girl Tip. Tip hadn’t thought the hat thing was that serious and so she told Bobby to pray about it before he did anything.

Only Jojo had met up with Amara and according to her, she hadn’t been the one to say something. It had been Bobby that came to her and ask her if Prince was using him, but she said she hadn’t wanted to get in the middle and Amara agreed. Amara said that no one should get in the middle of friendship because no one could tell if the friends will make up one day and then oust Jojo.

Jojo said she felt the same and so she really honestly wasn’t prepared for “Sista Talk” that Jessie. Jessie asked a group of women to come with their mothers and just be able to openly talk about life in Miami. And at first, everything had been great! They laughed and joked around. They even made fun of Jojo because her mother had revealed that she was dating Pleasure P.

It was as they were talking that Jessie mentioned how she felt about Amara. Amara had tried to insert herself between Jessie and her man but its something she’d done in the past and what she’s still doing. Amara had been the other woman that Gunplay was messaging and it was brought up at the table. It was the first Jojo had heard about it and so she said she would hold it down with Amara to see if everything was good because she was just the type of person.

Jojo explained how she describes herself as a loyal friend that will always keep it real and so Tip pushed back on that. Tip brought up the issue with Bobby and Prince and said that she shouldn’t be telling Bobby these things about his friend.

Jojo denied the story. She also asked Tip if she had been there as a way to say that she doesn’t know what she’s talking about and so that’s when Table Talk abruptly came to an end. Jojo didn’t understand why Bobby was running his mouth and she knew she had to talk to Amara about the reputation that Amara has been getting.

Amara was known for getting in the middle and it might just cost Gunplay Keyara. Keyara figured out that Gunplay was playing her for a fool and so she told him that she needed space. She wanted to be there for him, but she wasn’t going to be taken for granted anymore and so she wanted now was time alone to decide what should come next for her. And just for her.

Trina in the meantime had a show with Trick and she had tried to talk to him before they went out onstage about how he wasn’t showing up at the studio, but he pushed her and later flipped out when he learned she had produced music without him. He said that wasn’t allowed to happen and he pulled the plug on the music during her set.

The way their show came to an end had been the final straw for Trina. Trina had moment backstage where she was just yelling at everyone because she had been upset at Trick and was feeling humiliated. She said Trick had let her down for the last time!