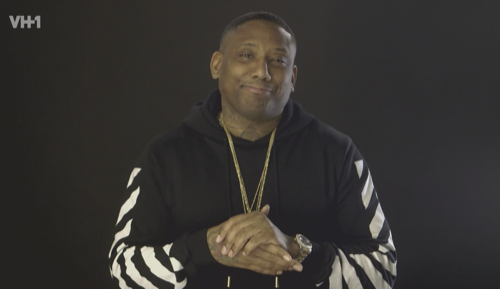 Tonight on VH1’s hit series Love & Hip Hop New York returns with an all-new Monday, February 11,  2019, episode and we have your Love & Hip Hop New York recap below for you.  On tonight’s season 9 episode 11, “Why You Trippin’?,” as per the VH1 synopsis, “Juju plans a girls’ trip to Costa Rica, and some of the guys manage to score their own invites; Alexis faces rumors about Solo Lucci being her daughter’s father; Remy and Pap go all out for their baby shower.”

Kimbella has been smiling since her proposal. Juju has a surprise for her. Before she can tell her while they shop, Kimbella asks Cyn and Juju to be bridesmaids. They all scream with excitement. Cyn talks about her and Joe. They are doing better, talking, connecting. They are in their way to getting a nanny. Juju shares that she is inviting both of them and Yandy and Maggie on a trip to Costa Rica.

Cyn and Joe are on their way to Remy’s baby shower. It is a 1950’s theme. Cyn asks Joe if he wants to go to Costa Rica. He doesn’t want to crash a girl’s trip but says yes he will go. At the shower, Remy and Pap are thrilled. Yandy and Juju talk on their way there. They are okay that Cyn invited Joe. Maybe Safaree can go too.

Alexis and Maggie meet for a drink. They talk about Maino and music. Maggie tells her about Hollywood Play’s death which upsets Alexis who cries about her own shooting run in and issues with her music. She also shares that she thinks she needs to bring Fetty to court to get a paternity test.

Maino and Juelz meet up with Pap and Joe. They talk about Juelz marrying Kim and how he should marry her when he wants and if that means now he should do it. Pap also tells Joe he should make Cyn his wife. She already gave him a child. Maino talks about Maggie and how she isn’t a rapper and how he is adding Alexis to the record. Since that happened they haven’t been talking.

Alexis brings her friend Ikey as support while she meets with Lucci who keeps saying her daughter is his. He arrives and tells her he wants to take a test and get it over with. Alexis cries. When it comes back that he isn’t the dad she wants a public apology. Lucci refuses.

Joe and Remy talk about how Pap thinks he should propose no matter what. Tre, Joe’s oldest son, shows up. He loves spending time with Tre. He missed out on a lot of his childhood. He tells him that he may marry Cyn and he wants to know what he thinks. Tre approves. Joe is surprised and happy.

Juelz is working on his music as much as he can before goes away. Yandy comes to visit. They talk. She is mad he didn’t stop the fighting between her and Kim. He tells her he didn’t want to get in the middle. He prays they can fix it.

The girls are on their way to Costa Rico with Joe, Maino, and Safaree. Juju is a little annoyed about the guys but she is dealing with it. Maggie and Maino’s record dispute comes up. They all start in with their opinions and teasing. Yandy gets really angry when she discovers Kimbella is there. She didn’t know Yandy invited her.

Cyn is happy when she sees the room Joe booked for them. They feel back to normal again. After Joe steps out, Cyn and Kim hang out. Kim is going to deal with Yandy and be an adult. Yandy meanwhile is upset. After it is revealed that some people think Yandy has been helping Inifinty for clout, she decides she wants to go home right now.