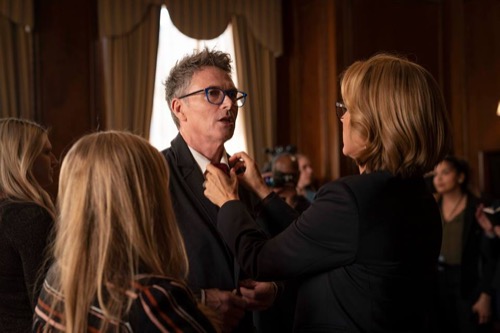 Tonight on CBS Madam Secretary airs with an all-new Sunday, April 21, 2019, season 5 episode 20 called, “Better Angels,” and we have your Madam Secretary recap below. On tonight’s Madam Secretary season 5 finale – episode 20, as per the CBS synopsis, “As Elizabeth prepares to leave the state department and announce her run for president, anti-globalist terrorists attack the United Nations delegation in Geneva who are there to sign the climate migration treaty.”

Liz, Kat and Nina wait for Peter. He is late for their consults with Russia and China. Meanwhile, Mike B. Meets wit Blake and Daisy to show them a new office for Liz’s campaign. He also has something for them to get done – talk to the McCord family about their personal lives and social media. Blake is going to have a hard time with this since he likes to be liked.

Liz arrives in the Oval. She managed to get China and Russia on board. She shares that she plans to announce her run tomorrow. It is all bittersweet. She heads home to see Henry. They are going on a vacation for 10 days. They are thrilled.

Blake and Daisy sit to talk to Jason about his racy Facebook posts, Ally’s weed eating and Stevie’s dating history. Stevie takes offense, giving them a speech that has them backing off.

Liz takes the podium the next day to resign and share her plans to run. Later, she sits on the Senate floor to discuss immigration and climate change. She is questioned why her treaty doesn’t do much to solve the problems but aid in alleviating the symptoms. After the meeting, Liz meets with the senator who made the comments. He is looking to get one of his bills passed for her treaty. Liz isn’t going for it.

At home, Liz vents to Henry. Maybe she shouldn’t have been so mean. Russell calls. They got all of their votes. The treaty will pass. She deserves a treat – scuba diving. Henry admits he is scared.

Blake and Stevie meet for a drink. They talk about climate change. On their way home, they talk about the end of the world. They kiss. It’s awkwardly sweet. Blake admits he is bi-sexual. But they cannot do this. They are going to forget it happened and not freak out.

Liz meets with Peter. She gives him a vintage RFK pin after he lost his own the other day. He tells her about how he and his dad wasn’t getting alone when he was younger until Bobby Kennedy came along. They both loved him and agreed on something. He understands she might make an announcement soon. She cannot share that.

Blake admits to Mike B. he kissed Stevie. Meanwhile, Peter’s dinner in Geneva ends in death after the whole dinner party begins to vomit and collapse. Two men dressed as waiters lock the door from the outside. Peter’s life flashes before his eyes as he collapses to the ground.

Jay and the team all meet. Liz tells them they all need to get to the White House and get into the fight. The whole council is dead. Its the Knights of Western Freedom who is behind the attack due to the treaty. POTUS demands they step up security and hunt down the cell group.

The bad PR starts against Liz and her treaty. Nina cries after hearing the news. Peter was good to her. Liz hugs her. Nina is surprised. Liz reaches out to Russia who has demonstrators going wild in the streets from fear.

Liz is at home talking to Henry about people’s fears. The next day Liz learns that Owen Callister, who is running for president, has someone on his team that has been funneling money to the Russians.

A short time later Owen puts his run on hold, Liz learns when she is at home. She tells Henry how upset she is. Stevie overhears the stress of it all. She heads to Blake’s. She tells him she is tired of being sad. They hug. She asks her in.

Liz meets with POTUS. She wants to take back her resignation. They need to fight together. POTUS tells her he cannot do that. His fight is today and her fight is tomorrow. She needs to hurry up and win.

The team head to the memorial of Peter. Liz meets with his kids to talk about their dad, sharing the best moments and her respect for him. They give her a tiny box with the RFK pin in it.

Supporters gather to hear Liz talk as she announces her run for the presidency. POTUS and the White House all watch as she makes her speech. They are proud.