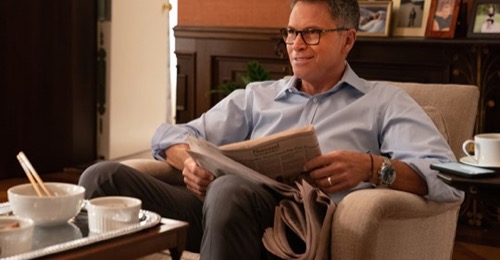 Also, Blake is questioned by Senator Hanson about potential campaign finance violations related to his love life, and Henry and Elizabeth search for the perfect dog.”

Henry and Liz talk over dinner about their empty nest. Henry mentions getting another dog. After some hesitation, Liz agrees. She wants to keep their search private. The next day, Mike and Russell get word she is getting a dog and tell Liz she can only pick from certain breeds. They are interrupted. Liz is needed in the warm room.

They found the man responsible for killing Peter and other members of the UN Security Council when Liz was a secretary. They talk about how to get their man out of the cave he is hiding in. Meanwhile, it is Blake’s turn to sit through inquiries about Iran’s possible medaling in Liz’s election. He is questioned on why his flight was paid to visit Martha’s Vineyard and why Stevie McCord went with him. Blake takes them back to the day he and his boyfriend were on again until he became squeamish over marriage talk. Blake starts to go on and on about his relationship when they cut him off. He shares that he only brought Stevie because his parents were going to try and set him up.

In the Oval, the team and Liz talk with Henry about sending robots in to get their target. Henry doesn’t like the idea, robots can’t tell when the target surrenders and it is bad for humanity. He seems to be outnumbered though with most of the room for smart weapons. Liz appears torn.

Mike brings Liz a new puppy. She is angry when she finds out the puppy is 4 weeks old and missing her mom and littermates. She leaves the room beside herself.

Blake continues to detail his trip with Stevie. His parents thought they were in a relationship and were thrilled it is Stevie. Blake dodges more questions.

Liz wakes up in the middle of the night after having a dream about Peter. He was fixing his car, getting ready for a trip with his kids and wife. Liz wakes Henry to make sense of the dream.

The next day, in the war room Liz chooses to have the Seal Team in versus the UGVs. Liz smiles with pride when the Seal’s get their man and get ready to leave until the commotion suddenly scrambles the cameras.

Later, Daisy holds briefing informing the press that several Seal Team members were killed. She is asked about Liz’s alternative that would have kept the Seals safe. Daisy declines to comment.

Blake continues to share Stevie’s time in MV at his parent’s party. While there, Stevie got into a verbal debate with a man who didn’t support the idea of a woman president.

Liz meets with the families of the Seals. They all share with her that they aren’t mad she chose the Seals over smart weapons. They are all heroes and if she remains silent and subdued, it makes it as if they died in vain. She should be proud as they all should.

Liz meets with the two superpowers, China and Russia, about smart weapons. China’s representative Chen thinks this is all for her presidency. She tells them it isn’t and they can get on her side or she will be pulling aid. They look stunned.

Liz and Russell sit and talk. He tells her she needs to lead and explain herself less. He also suggests she not bring up smart weapons. She is going to scare the public and in turn, become unpopular this ineffective.

Blake confirms that he knew about funds collected on the dark web by his parent’s friend Sheldon that was donated to Liz’s campaign. Liz’s campaign then sent it back to him.

Liz meets another dog brought to her by Mike. She is a pretty dog but very unfriendly. Henry brings another dog in he picked and she is the perfect easy-going family dog.

Blake tells the entire room about his boyfriend’s return and how they made up. At the end of his parent’s, he introduced Trevor as his fiance. Liz then gave him 5 days off to celebrate. They end Blake’s interview after hearing enough about his love life.

Liz meets with Ed, an admiral who was informing her in the war room at the time of the mission. She has been informed that he was the leaker, telling the media about her option to use smart weapons. She has him taken away by soldiers for violating an oath to his country and haring private military information.

Liz addresses the nation about smart weapons/robots. She talks of eroding freedom and security if humanity gives way to AI.

That night, Liz and Henry lay in bed. She thinks her dream about Peter was about accountability and people in your care. Henry thinks so too. He gets up to get a snack. Their new dog is at the end of the bed. She comes to Liz and kisses her. She smiles and names him Hope.