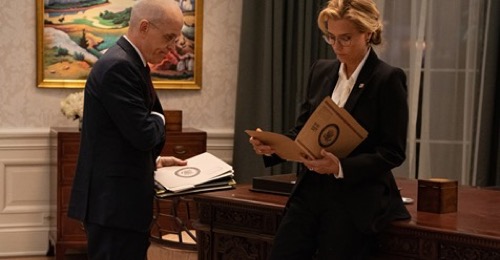 Tonight on CBS Madam Secretary airs with an all-new Sunday, October 27, 2019, season 6 episode 4 called, “Valor,” and we have your Madam Secretary recap below. On tonight’s Madam Secretary season 6 episode 4, as per the CBS synopsis, “Henry teams up with a Marine veteran to fight for legislation that helps Veterans Affairs provide better mental health care, but he encounters surprising resistance from Vice President Carlos Morejon. Also, Senator Hanson (Wentworth Miller) questions Daisy about an arrest in her past.”

Liz is presenting a Marine with a medal of honor in a ceremony. After the ceremony is over Daisy tells Liz she did great for her first ceremony. Henry talks to the Marine just honored about the passing of a bill involving the VA. Henry is supposed to speak in front of the senate but he thinks he found the better man for the job.

Dmitri studies to become a citizen. His sister teases him about calling Stevie. Meanwhile, it is Daisy’s turn to sit for the inquiry hearing into Liz’s campaign and Iran’s suspected medaling. They ask Daisy why she was arrested for assault on the campaign trail. She tells them of their trip to a bar to unwind when a man got touchy and tried to grab her from behind. She defended herself.

Henry and the Marine arrive at the hearing to find out they have ended early. The Marine is very angry. Henry tracks down the senator who set up his visit to the Senate floor. He is angry but stops abruptly when he finds out the Vice President’s asked the senator to cancel the hearing.

Liz is enjoying her time at the outing for the Marines and their families. Mike B. Is annoyed. She needs to focus on the VA bill. Meanwhile, Stevie shops for camping gear with her new love interest while Henry talks to the VP about why he would cancel the meeting. The VP tells him he doesn’t like the bill.

Dmitri’s sister arrives at the store where Stevie is. She tells her that it is funny they run into one another. She is attending a roundtable for women in lower-income communities the next day and would love Stevie’s insight. They plan to meet later.

Daisy is accused in the hearing of being let off easy after her assault. Across town, Stevie sits in a bar waiting for Dmitri’s sister but is shocked when he arrives instead. They sit and talk. Stevie confirms that she is seeing someone. He isn’t. She is supposed to go camping this weekend. This causes some awkwardness.

Liz and Henry are in bed. They talk about the VP and the VA bill. Henry is very frustrated. Stevie comes in and nonchalantly drops the news that Dmitri is back while telling them she is going camping. They pick up right away on her stress.

Liz sits for lunch with the senator who canceled the Marine’s hearing invite. They enjoy some of his family’s stout ale called Blue Lid. Sometime later Liz is drunk and has blue lips. Daisy brings her back to the Oval for a nap and some coffee.

The recently retired Marine is on the road driving when he is hit pushing him into the car in front of him. He panics and then becomes angry. He gets out of the car and climbs on the hood. He is standing on the roof when the police come. They shoot him when he attempts to reach for something.

Liz visits Henry in his office. Henry is very upset over the Marine’s death. He had PTSD and was unarmed. He wanted to die. Liz talks about her own PTSD.

Russell and Mike B. Come to Daisy. The committee thinks she lied at her portion of the hearing. She tells them she did not. The next day she returns to the hearing. They have video footage of her assault. They note that she forgot to tell of them of a French National that was there. She tells them things were very chaotic. They let her go.

Stevie heads to go camping with her new boyfriend. She is preoccupied with thoughts. Meanwhile, Henry addresses the senate about the marine, the new bill to improve soldier’s lives and more. Later, he and Liz attend the Marine’s funeral. They watch as his wife receives the flag.

Daisy shows up on the doorstep of Russell’s home. She tells him she purposely left the name of the French National off the list. He tells her they need to talk further inside.