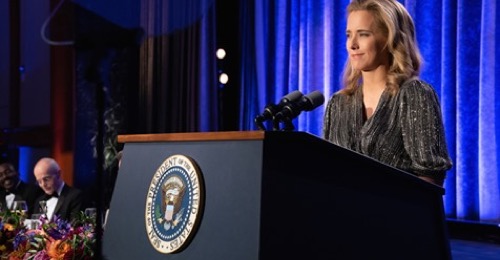 Tonight on CBS Madam Secretary airs with an all-new Sunday, November 17, 2019, season 6 episode 7 called, “Accountability,” and we have your Madam Secretary recap below. On tonight’s Madam Secretary season 6 episode 7, as per the CBS synopsis, “When U.S. intelligence locates the mastermind behind a foreign country’s hack, Elizabeth must decide whether to risk war by extracting him from the country while she also prepares for the White House correspondents’ dinner. Also, Jason faces backlash after he confronts his school newspaper over its coverage of Elizabeth.”

Blake and his fiancé are in their home relaxing when the FBI knocks and comes in from nowhere. The next day, he is explaining what happened to Russell and the others. They took his phone, his personal notes for the last 6 years. He was going to write a book. They tell him he has nothing to worry about, he has never broken the law.

Jason is grabbing a coffee when he sees a journalist he knows. She recently insulted Liz in one of her columns. Jason sits for a minute to talk about how strong his mother is.

Russell comes to see Liz to tell her that he knows who tampered with her election. They sit down together and she calls the president of Iran to tell him to turn over his people. He denies it and then gives her 48 hours.

Stevie and Dmitri have been hiding out for weeks. He asks her if they can go out. Meanwhile, Liz is in the Oval with the national spelling bee winner when the press has some interesting questions. Blake tells Russell he thinks he knows why they are asking the questions they are. Later, Iran threatens the US if Liz doesn’t back off with her extradition demands.

Stevie comes to see Liz. They talk about Dmitri. She is worried she will be judged. She just broke up with her boyfriend. Liz tells her not to care what others think, she didn’t before. She admits that she is actually scared she will get hurt.

Henry and Liz talk about what to do after Jason’s comments to the journalist goes viral. Liz is asked to meet in the Sit Room. Iran is continuing to wreak havoc, this time on an oil tanker. Liz wants those nationalists and she will breach sovereignty. They warn her that this could be seen as an act of war.

Liz gets more bad news when Russell tells her that Senator Hanson will stop the investigation into her election if she agrees to push a few bills forward. Liz doesn’t think so. She would rather be on the farm writing her memoirs.

Jason comes to see Henry and Liz. They tell him he needs to publicly apologize to the journalist.

Stevie finally tells Dmitri why she has been keeping them out of the public eye. If they become official she will expect more and then she could get hurt.

Henry and Liz have one of their nightly talks. She thinks the earth is going to swallow her whole. All of the pressure and everything that is going on is stressful. Maybe the US wasn’t ready for a woman president? Henry reassures her she will get through this.

Liz sits the next day to talk strategy about getting the nationalists with the help of the military. Hey warn her the consequences but she doesn’t care.

Liz heads to an event. There she speaks with Hanson and tells him that when it comes to his offer she thinks he is a hack. She is going to continue to serve the American people.

During the event, a comic has fun making fun of Jason and then Liz, who uses her time in the poem to talk about free speech and the media. She also talks about bullying and more. Hanson looks furious. While all of this is happening, several men come in and knock out the help to get to one man who they rush out of the building quickly and unnoticed.

The next day, Hanson holds a press conference, accusing Liz and her cabinet of a number of wrongdoings; covering up a murder, traitorous acts, her personal aid Blake and his files, allowing Dmitri amnesty and more. He calls for her to be impeached. Liz cannot believe what she is hearing. She asks for a minute in the Oval. After a few minutes, she gets back to work. She organizes her meetings for the day and tells Blake it is not his fault they took his files.