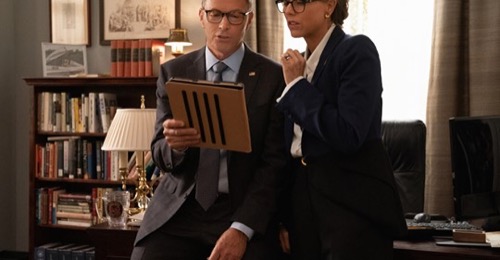 Tonight on CBS Madam Secretary airs with an all-new Sunday, November 24, 2019, season 6 episode 8 called, “Ships and Countries” and we have your Madam Secretary recap below. On tonight’s Madam Secretary season 6 episode 8, as per the CBS synopsis, “An American tech CEO goes missing in a foreign country. Elizabeth navigates complicated diplomatic terrain to get him back without triggering a regional conflict. Also, things get personal when Stevie and Henry testify at House impeachment proceedings.”

Impeachment inquiries have begun with Liz’s family up first in the interview process. Liz hasn’t been sleeping much and Henry is trying to get her to get out of her own head with some cardio. It will be aired nationally, this concerns her and the fact that Stevie will be interviewed.

Liz and the team meet to discuss the upcoming day. Russell tells her that her approval ratings are still holding and made the impeachment inquiry. Liz takes a minute to be alone and call Stevie. Stevie tells her she has it and everything will be fine.

Before the impeachment inquiry begins, Liz is informed of an American citizen Eli Volk, who is gone missing. The team will look into it while watching her inquiries. Stevie arrives at the hearing and takes an oath, to tell the truth. Meanwhile, Liz gets word that Eli is at the Iran embassy.

The hearing continues at Stevie is questioned about her time as Russell‘s assistant. They’re trying to show that Liz got her the job but Stevie defends herself well. She is in question about Dimitri, his previous assault charges and an addiction to opiates. She is caught off guard. When she explains further that her parents didn’t know she was seeing Dimitri at first Senator Canning rips her apart for being deceitful. She returns home to see Liz and Henry who hug her and tell her they love her. She apologizes and they don’t understand what they think she was brave.

The next morning, Henry tells Russell, Mike B. And Liz that he wants to be interviewed next so that he can clear up the Dmitri fiasco. Liz thinks it should be a close hearing since some of the information is still classified in regards to Dimitri. Meanwhile, Stevie and Dimitri talk. Things are awkward and she tells him she isn’t sure about his previous opioid addiction. He explains that he has been successfully drug-free. She tells him she needs some time but she’ll come hum soon.

Liz receives intelligence that Russia and Iran have been working on an oil deal. Coincidentally Eli Volk was captured by Iran following that deal and personal payment from Russia’s president to Iran. Liz isn’t going to play back-and-forth she demands book to be released within 12 hours. Hours later, Liz is brought into the set room well US military tries to get Volk back. They watch the mission as it turns dangerous with gunfire.

It looks like Liz will be forced to retaliate. She videos with the president of Iran who is not willing to back down. Liz demands that no further fire take place and that Eli Volk is able to walk off the plane. Russell tells her it was well played.

Henry is now in the middle of a closed hearing to answer questions by leading Senator Canning. Canning spins a wild tale, accusing Henry of using Dimitri as an asset to further Liz’s political career which ultimately furthered his career as he served for Dalton and now serves for her. Henry is so disgusted and upset by this but maintains his composure, discussing how Liz leads with virtue, grace and does only what is good for the American people. Canning dismisses all this once again leaving Henry fuming.

The next day Volk’s release is criticized as another example of Liz’s connection to Iran. Meanwhile, Stevie meets with Dimitri so they can talk over what’s been happening. She’s upset that he lied, saying that he was alone in Alaska but she checked social media and there’s a girl that he was with several times in the pictures. He tells her it meant nothing.

Liz makes a stop at Hanson’s house to confront him about going on the news this morning. She doesn’t understand why he wants to destroy her so badly. He tells her that she was falsely elected, somebody who rode in on her predecessor’s coattails. She is an aberration and once she is gone the country will shine again. It leaves Liz speechless.

That night she and Henry sit together and talk. He explains that some people are just intimidated by a powerful woman.