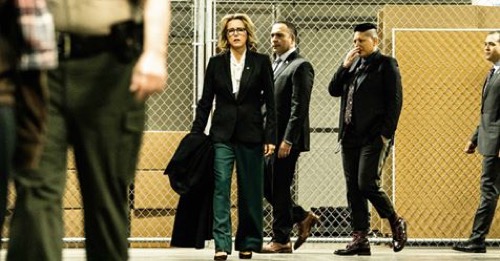 Tonight on CBS Madam Secretary airs with an all-new Sunday, January 6, 2019, season 5 episode 11 called, “Winter Garden,” and we have your Madam Secretary recap below. On tonight’s Madam Secretary episode, as per the CBS synopsis, “Conclusion. Elizabeth goes head to head with a U.S. governor over the state’s new policy of separating unauthorized immigrants from their children. Also, she and Henry plan to renew their wedding vows.”

Liz talks to a priest as she gives her personal property to the jail where she is being arrested and booked for protesting families being separated at the border. She tells the priest she couldn’t stand by and do nothing after she saw what her own country was doing. Meanwhile, Russell is having a fit in the oval with Henry and Dalton. Russell is angry that Liz is in the spotlight when she is supposed to be prepping to run for president. Henry reminds him she took an oath for human rights. They strategize what to do.

Stevie talks to Daisy about how she doesn’t have a band for the holiday party. Stevie wants her, Jay and Blake to sing. Daisy has other issues, mainly Liz being in jail. Stevie isn’t worried because she will be out in no time. Daisy tells her to use her mom’s name to book someone.

Mike B. And Henry arrive to see Liz. Mike wants her to plead guilty so she won’t be charged with a felony for trespassing. She refuses. She wants America to see the children, the faces and the issue. Henry reminds her that she needs to weigh her decision. If she has a felony she won’t be able to run for president.

In front of the judge, Liz pleads not guilty. Mike wants to cry. Liz is offered to leave on bail. She refuses. She will return to jail until all the children are brought back to their parents. She gives a speech before being brought back into custody.

Jay comes in to see Russell who is beside himself that Liz pleaded not guilty. He isn’t against her stand but she is going against the administration which is bad. Jay tells Russell the president needs to issue a statement and get behind her. Russell reminds him that the job is doing what is best not always right. Russell’s secretary brings their attention to a video on the news submitted by a guard at the Arizona detention center. Now, this changes things. The president calls the governor to try and barter a deal. He isn’t budging. They decide after the call to charge the governor for kidnapping as he is acting outside the scope of his position. Its a bit of a stretch but they need to do it.

The kids are all at home eating dinner while Stevie finally books a band. Meanwhile, Jay comes home. He is still on crutches and in pain after his basketball injury. He eats THC edibles out of the gift basket at his door. He is feeling a little loopy when Liz calls from prison. She tells him she wants him to win over Senator Morejon. He needs to start working on it tonight, asap.

Jay approaches the senator the next day. He brings a pot lobbyist with him. They pitch some interesting facts when it comes to the legalization of pot and how border violence has gone down as well as drug smuggling. Why not vote for two bills; legalization and family separation policy and reach a bigger demographic before his next campaign run. He goes for it.

Kat finally arrives to see her father after not seeing him for years. They argue over family, her daughter Desi, and how she, Kat, lives her life. She isn’t doing this, she tells him. She wants him to apply for citizenship so he will be safer. She gives him the forms. He promises to do it.

Henry and the kids visit Liz in jail. They bring her all she needs to remarry Henry at 8:22 like they have been planning for weeks. The priest she met will help them renew their vows.

They all come together for photos and vows. Mike B. Has a photographer takes pictures. Liz demands they stay private. Henry reads a letter he wrote her the day before they married. Liz gushes. She gives her own vows. Before they kiss, Russell texts Stevie that the bills passed and Liz if free.

The next day. Liz and the team watch as children are reunited with their families. Later, they all celebrate together at Liz and Henry’s. She tells the team she going to run for president and she needs them all with her since they helped her get this far. They all toast. She hears a Peter Frampton song playing and goes to turn it up when she realizes that he is actually in her house, singing. She yells to him that she is his biggest fan! They ask to dance.