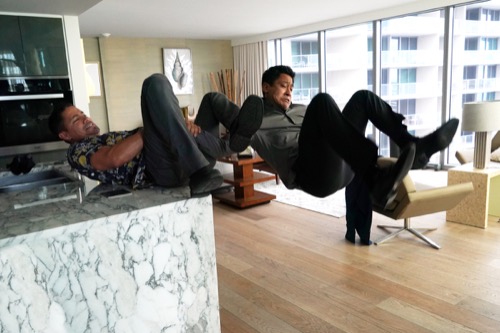 Tonight on CBS their reboot of the classic series Magnum P.I. premieres with an all-new Monday, February 25, 2019, episode and we have your Magnum P.I. recap below.  On tonight’s Magnum P.I. season 1 episode 16, “Murder Is Never Quiet,” as per the CBS synopsis, “Magnum is hired by a woman to prove that her son didn’t kill his girlfriend and has only 24 hours to do so before the accused accepts a plea deal. Also, Rick and TC try to recover stolen appliances that were donated to a wounded veteran.”

Rick is coaching Magnum on what to say to get out of jury duty. The next day, Magnum attempts his charm and excuses on the judge. She reprimands him on the front of the entire court. Magnum tells the judge he wouldn’t believe anything the suspect says because he would have to investigate it for himself. He gets dismissed. Hours later, the suspect’s mother reaches out to Magnum. She knows her son Josh did not kill his girlfriend Libby. Magnum takes the case. Higgins interjects that he can do it pro bono. The mother tells him Josh took a plea deal so he only has 24 hours to prove Josh is innocent.

Rick, TC and Shammy head to the home that is being built for a vet. When they show up they are told someone stole every inside. They get to work trying to find the culprit.

Magnum meets with Josh’s lawyer who tells him the plea is a gift and he is wasting his time. Magnum meets with Josh. They talk about Libby. Josh doesn’t remember the day Libby was killed because he had been drinking. He is an alcoholic who is now clean. He tells Magnum that Libby was acting weird before her death. She was always on the phone with someone but she wouldn’t tell him who. Josh talks about a creepy guy always at the bank.

Magnum and Higgins arrive at the bank to talk to the manager and then the man of interest, Trey. He doesn’t want to talk to them and gives them a hard time. The manager shares that Trey has a temper and anger issues. Magnum calls Katsumoto to ask why Libby’s phone was never found. Katsumoto doesn’t want to help either. Magnum heads to the apartment where he looks around with the help of Josh’s mother.

While gassing up the Ferrari, Magnum is threatened by a mystery man who tells him he could get hurt looking into Libby’s murder. The man takes off. Magnum calls and tells Higgins before calling Katsumoto.

Rick’s friend Lisa helps them narrow their search for the thief. They head to see about a man named Mitch.

Magnum visits Josh to tell him about the man. This means he didn’t do it. Josh wants to take the plea because he doesn’t want to take a chance. What if Magnum cannot prove it. They get to talking and Magnum describes the man. Josh has seen him before. Magnum runs to the court to get more time. The judge throws him in jail.