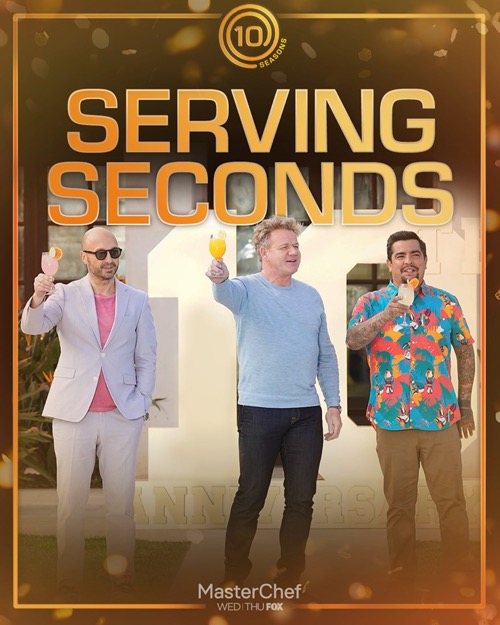 Tonight on FOX Gordon Ramsay’s Masterchef returns with an all-new season on Thursday, June 20, 2019, season 10 episode 5 called “The Blind Chicken Show,” and we have your weekly Masterchef recap below.

On tonight’s Masterchef episode as per the FOX synopsis, “The Top 18 battle it out for immunity in an epic team challenge. With only forty-five minutes on the clock, the losing team has to break down a chicken to make a delectable dish in an intensely crucial elimination challenge. Watch as the top eighteen cooks for their lives and discover which contestant has to hand over their apron”

Time for the Pressure Test, Subha joins the red team. The challenge is chicken – they have to perfectly breakdown a chicken and Gordon gives them a lesson, but he does it blindfolded. The judges tell everyone they will have to do it blindfolded and after a lot of gasping and nervousness, they are told it is just a joke. The thirty minutes start.

It is time to take a close look at how well they have done. If they did well, three of them will join the blue team on the balcony. Wuta is first, he didn’t do too well. Jamie did fantastically. Dorian did well. Michael did well. Kimberly did not. Shari’s chicken is disproportioned. Sarah is nervous, she didn’t do too well. Micah left too much meat on the bone. Renee gives herself a 90, but she left a lot of chicken on the bone. Subah finished cutting his chicken fast, but did he do accurately? No.

Tonight’s task was to perfectly break down a chicken, the winners are Jamie, Michael, and Dorian; they head up to the balcony. The ones that are still at their stations and have another challenge, after this one of them will be eliminated. In this challenge, they will have to take their chicken and make it a worthy dish for this competition. They need to work extra hard to wow the judges. Gordon tells them to get creative, they have forty-five minutes. Subha decides to make a curry dish that generally takes three hours to make.

Wuta made 8-Spice Fried Chicken with herb roasted potatoes and honey cream sauce. Aaron says the dish needs a fresh element. Joe says it is not his type of dish. Gordon says there is one mistake, there is too much flour, it needed a thinner coating.

Sarah made Buttermilk Fried Chicken with celery root puree and slaw. Gordon says that visually it has finesse. Aaron says she did something remarkable.

Subha made Chettinad Chicken Curry with Basmati rice and cabbage & peas. Gordon says the plate looks like the cats crawled all over it. Aaron says that it tasted a lot better than it looks. Gordon says it tasted delicious. Joe thinks it is fantastic, he loves the white heat.

Renee made Southern Fried Chicken with Roasted Mashed Potatoes, Gravy, and Drop Biscuits. Joe says this dish could be on the cover of a cookbook. Aaron likes the seasoning of the chicken. Joe says it looks like it tasted, it very homey. Gordon says the biscuit is the star, the mashed potatoes are too wat

Shari made Tandoori Chicken with Cumin Spiced Potatoes with Mint-Coriander Foam. The judges agree that the presentation is beautiful. Gordon says it is delicious. Aaron loved it, Joe as well.

Micah made Coq Au Vin with Pearl Onions, Mushrooms and Carrots. All the judges agree, the chicken is cooked beautifully but it is not a Coq Au Vin.

Kimberly made a Rosemary Herb Chicken with Mediterranean Rice and Mushroom Sauce. Joe says the plating lacks finesse and the gravy tasted like cottage cheese. Aaron says the rice and chicken are good, the sauce is terrible. Gordon says it is a shame.

Sarah and Shari are told to head upstairs, they had two of the best dishes. Micah is also safe, along with Subha.

Wuta, Renee, and Kimberly are in the bottom three, one of them has cooked for the last time in the Masterchef kitchen.