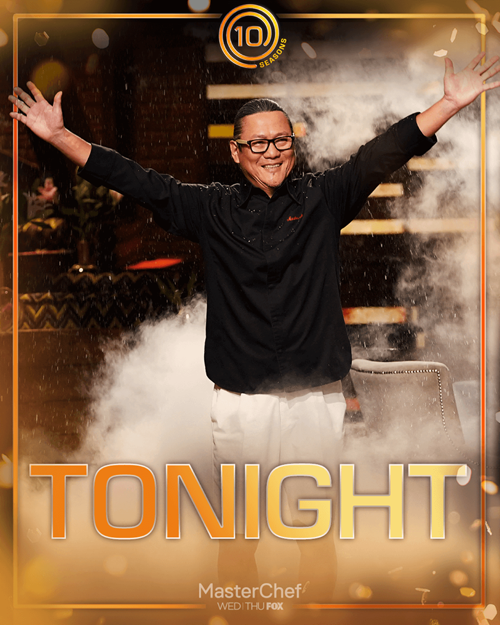 Tonight on FOX Gordon Ramsay’s Masterchef returns with an all-new episode on Thursday, July 24, 2019, season 10 episode 12 called “King of The Crabs,” and we have your weekly Masterchef recap below. On tonight’s Masterchef episode as per the FOX synopsis, “The Top 13 endure an immunity challenge fit for a king when they are tasked with breaking down Alaskan king crabs.

Special guest Chef Masaharu Morimoto enters the MASTERCHEF kitchen, where the contestants will have to craft something magical for him in under 60 minutes. Halfway to the finale, the judges expect nothing but legendary meals from the home cooks. Who will survive the challenge and receive a special surprise?”

The contestants were halfway to the finale! There had been thirteen of them left at the start and the group itself were excited. The final thirteen knew that the next stage of the competition would get tougher, but they wanted to prove themselves and there was no better chance for it than the Immunity Challenge. The Immunity Challenge was exactly what it sounded like. The contestants were competing for the chance to be safe from elimination and this challenge demanded that stand out. Meaning they all to raise the bar on the one. Especially as the judges were looking for restaurant-style quality. The judges talked to the contestant about the challenge beforehand and they informed that there was going to be a special guest judge.

The judges brought in Chef Morimoto. He was a famous chef and everyone became excited at the sound of his name, but he was also a pretty busy guy and so he came all that way because he was needed for a MasterClass. The MasterClass was when the judges showed the contestants something new. This time they showed them how to remove the juicy meat out of an Alaskan King Crab. The Alaskan King Crab can run up to five hundred dollars and so it was important to remove as much meat as possible. Both Morimoto and Ramsay showed the contestants their own unique ways to remove the meat. The contestants didn’t have to replicate everything they saw, but they needed to remember how to remove the cartilage because that too was important.

The judges also hadn’t given the contestants that much time to think about things. They wanted to test the home-cooks on what they could create on the fly and so it was a mass panic when the judges started the clock. Everyone was running around and most of them tried to be special with Asian flavors. Fred and Wuta both love those flavors and so they sort of leaned into it for this challenge, but others like Subha tried to combine what they knew and simply incorporate the crab meat. There was no way to cook crab wrong and so no one was in trouble, only some of their plans didn’t work out. Nick tried a sushi burger for instance. He didn’t realize until it was almost too late that the rice wasn’t going to work as buns and so he had to run back into the pantry.

Nick put himself at a disadvantage when he had to start over, but the judges said it was how he rebounded from it that mattered and truthfully he wasn’t the only one that had setbacks. There were two contestants that were allergic to crab. They had to work on every other portion of the dish because they could only focus on what they could taste. Then there was Renee who tried making pasta and only got several strands out of her pasta maker. She could have easily tried again at the pasta maker. Only she got angry and threw away the rest of her pasta. It was short-sighted and it made the judges doubt her. Joe had to come around and he had to personally assist her with getting her pasta back on track.

So, no one was perfect! They were all frazzled with having to highlight the crab meat and, after sixty minutes, there were six dishes that the judges wanted a second chance at the tasting. They first called down Wuta. Wuta created Kimchi Fried Rice with King Crab and Fried Egg. It looked stunning because he plated it inside of the crab’s head and it tasted great as well. The judges liked it though they didn’t really taste the crab and so they did have to subtract points for that. The judges next called Nick. Nick impressed them with his plating skills because he was the second person to incorporate the shell as a decorating tool. And it was just unfortunate the dish itself had been disappointing.

Nick created a Butter Poached King Crab with Smoked Sunchoke, Creamy-Corn Puree, and Fennel Salad. But one of its few good qualities was the crab head. The judges didn’t appreciate Nick throwing the crab meat on top like it was almost forgotten and they said it showed a lack of maturity. The second good part was the taste and it’s what saved Nick’s dish from being a failure. The judges liked his method if not his execution. The next person they called down was Shari. She created a King Crab Salad with Yuzu Vinaigrette, Green Apple Pickles, and Avocado Mousseline. It looked beautiful and it tasted great. And there hadn’t been anything the judges found a problem with.

The next person they called down was Fred. He created King Crab Stuffed Lanterns with Crab and Fennel Broth. His dish was called the Bri standard of plating. He dish was elegant and sophisticated. It was also so beautiful that no one else could compare. So it sucked for Dorian. She was called down next and she too put herself on the plate. She created Herb & Citrus King Crab Salad with Fried Green Tomatoes and Spicy Aioli. The dish tasted great even if both sides of the plate hadn’t exactly seemed like they were together. There was her southern side and then there was her elevated side. The judges loved both and so they simply had a few pointers on its execution. And the last person they called had the same problem.

Micah was the final person called. He was allergic to the crab and he, therefore, had no clue what it tasted like. He created Squid Ink Risotto with King Crab and Saffron Lemon Aioli. The squid ink was quite powerful on its own and so he took a risk, but he was one of the lucky ones, because it tasted great even if it didn’t look great. Morimoto also wanted more crab and flavor. He felt that Micah still had some ways to go and Micah didn’t really hear him because he was fangirling out that Morimoto got to taste his food.

The final part to the Immunity Challenge was naming the winners. There was going to be three of them and so they named Shari, Micah, and lastly the winner of the upmost winning dish – Fred!

Fred was going to dine Morimoto’s restaurant as well and so he was on Cloud 9 tonight. Meanwhile, tomorrow was elimination…