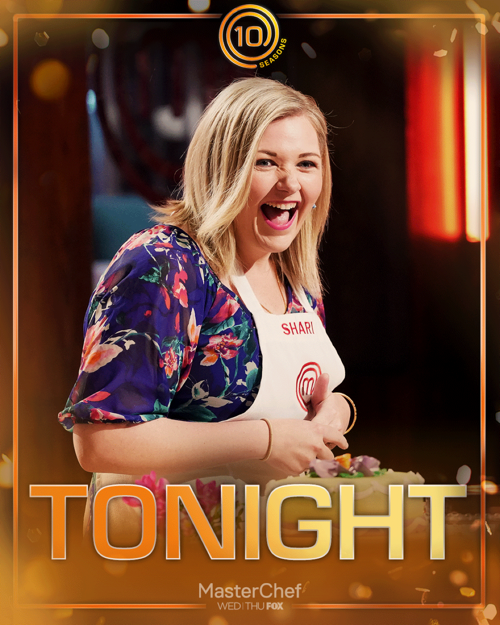 Tonight on FOX Gordon Ramsay’s Masterchef returns with an all-new episode on Thursday, July 31, 2019, season 10 episode 14 called “Let Them Eat Cake,” and we have your weekly Masterchef recap below. On tonight’s Masterchef episode as per the FOX synopsis, “The Top 12 are in for a sweet treat in this week’s immunity challenge. As the home cooks enter the MASTERCHEF kitchen, they are surprised with an array of gorgeous and delectable cakes.

In under 75 minutes, the contestants will have to replicate one of the cakes on display for the judges. Discover whose baking skills will reign supreme.”

It was Sweets Week! The contestants were going to be given challenges rooted in sweets and their first challenge was naturally with cake. When the contestants first came in, they saw a whole table covered in cakes and they thought it was paradise until they found out about the challenge.
The contestants were being asked to replicate one of the cakes on the table. They all had to draw candles to pick who went first and so some were going to pick the easy cake like the Pineapple Upside Down Cake. It was fairly in comparison to everything else on the table. The hardest cake there is was Gateau Opera cake and the judges didn’t think anyone would choose that one. There weren’t many people that had even heard of the cake much less come across it. And so leave it to Noah to be risk-taker.

Noah was one of the first to make a selection. He could have had his pick of any of the easier cakes and he still went for the hardest. The easy cake, however, went to Subha. Subha got in just before Wuta. Wuta said Subha’s name in exasperation because he wanted that cake for himself and so the non-baker suddenly had to take a bigger risk with the other cakes. Then there were the bakers. Dorian chose the Champagne cake because the pink colors reminded her of her mother’s fight with breast cancer and so she chose her cake for sentimental value. She wasn’t like Fred that had something to prove. Fred was known as the Sweets King and so he knew he couldn’t afford to go with an easy cake. Not when the judges were being so, well, “judgy”.

They judged Bri for choosing something as easy as the carrot cake. They checked on Noah for any signs of failure because they all thought he couldn’t pull off such a hard cake and so they were watching him when that moment finally came. Noah burnt his ganache. The ganache was the most important piece of the cake. Without it, Noah had no luck with winning the challenge and it could also send him home. Noah’s saving grace is that he wasn’t alone in making mistakes. Sarah chose the Berry Cake and then she couldn’t get the frosting right. This meant it took her a little too long to set the cake up. Not that Bri was much better because her cake was still hot when she put her icing on and so most of it melted off.

Before they knew it, the time was called and the contestants had to face judgment. The first cake was the German Chocolate Cake that Fred baked. He added more coconut than he needed and other than that the judges loved it. The next cake that was tested was Noah’s Noah Gateau Opera Cake. His cake looked like crap and it also tasted great. The flavors were there. The judges just wished there was more finesse and they said the same of Nick. Nick baked the Victoria Sponge Cake and he got the flavors right even as he too looked like crap. Then again it was nothing compared to Bri’s cake. She baked her Carrot Cake and it was problematic from start to finish. There was first the problem with the icing.

Bri had run out of the icing. She had a problem with it because she baked her cake too high and that could even explain why it took so long to bake in the first place. Then there was the flavor. The cake lacked the inner icing and it tasted grainy. Meaning she didn’t even get the mixture right. Bri’s went for one of the safest cake and she ruined it. Her cake, as well as her baking skills, had needed improvement. The next cake that the judges tasted was Renee’s. Renee baked a Cheesecake because she was used to baking them at home and unfortunately she didn’t find out until later that the one she was replicating was a lot denser than hers. She also had to restart her crust. She was in such a rush to get the second one set up that she failed to use enough butter and so it later fell apartment.

The judges called Renee’s cake “sweet cream cheese on crumbs”. It also hurt her that most of the caked after her each an improvement over the last, until the very last one which was the sole exception. Subha wasn’t a baker yet his cake was a highlight. Jamie had never tasted Black Forrest Gateau and somehow he got the flavors right if not the appearance. Shari’s Devil’s Food Cake was beautiful and it tasted delicious. Micah’s Coconut Cake showed age had nothing on experience. The judges loved Wuta’s Hummingbird Cake so really he was worrying for nothing. Meanwhile, Dorian’s Pink Champagne Cake was the epitome of the contest because she put herself on the plate and it had been amazing.

So the only person out of the illustrious group that got it wrong was Sarah. Sarah baked the Berry Layer Cake and it looked ugly. Even the insides had bled in together. Therefore, the only good thing about the cake had been the taste and so that saved her from the bottom three.

The bottom three for tonight were Nick, Bri, and Renee.

And so the one eliminated tonight was Renee, and that’s only because her cheesecake wasn’t even formed right.