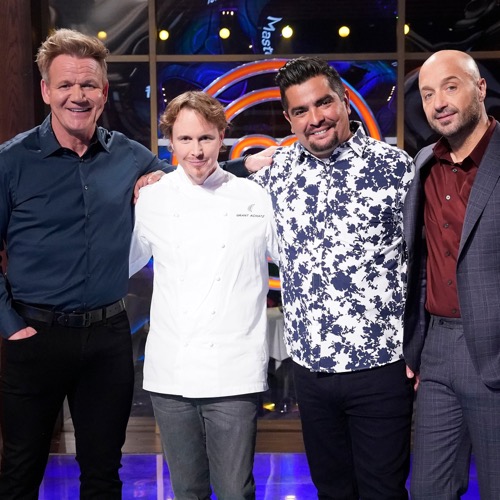 Tonight on FOX Gordon Ramsay’s Masterchef returns with an all-new episode on Thursday, August 15, 2019, season 10 episode 19 called “Pigging Out,” and we have your weekly Masterchef recap below. On tonight’s Masterchef episode as per the FOX synopsis, “The judges introduce an unusual special guest to the home cooks to inspire the coming challenge: Marley the Pig.

Judge Aaron then gives a demonstration on how to make his family recipe for chorizo sausage. Now it’s time for the cooks to produce a dish with their own version of homemade sausage in just under 60 minutes.”

MasterChef continues tonight with the judges – Chefs Gordon Ramsay, Joe Bastianich, and Aaron Sanchez walking into the kitchen greeting the Top 9 cooks. Nick DiGiovanni is safe from tonight’s challenge, but tonight’s Elimination Challenge is tough. The judges introduce their special guest judge, with Aaron escorting a “true beast” in, bringing in Marley a massive pig. Bru Baker worries they will have to cook him, but they are informed by Chef Ramsay that is going to make homemade sausages; other than Micah Taroch making venison sausages no one else has ever made them before. Aaron is going to make chorizo but they can make whichever one they want.

It is very technical, but Dorian Hunter says it is an inspiration, even though scary. Chef Aaron shows how they place the meat into the casing, gentle feeding it; reminding them to make sure the sausage come out even. The cooks are given 60 minutes to make their sausage links and to use the links to make their own dish. Sixty minutes is placed on the clock and they are off and running to the pantry to select their ingredients.

Jamie is having a hard time getting the blade but promises to give it his all. The cooks encourage each other to stay strong and focused. Sarah Faherty is making bratwurst and braised cabbage, something she learned while she was in service in Germany. Jamie is going a cajun green onion sausage, with red beans and rice. Gordon reminds him that the sausage is the hero and he needs to make sure it pops. Subha Ramiah is urged to hurry up while Jamie’s sausages are more pureed than ground meat texture. The judges approach Noah Sims who is making a lamb and pork sausage, something that reminded him of his trip to Ireland the previous summer. He is reminded this is a very competitive field.

Shari Mukherjee made green chorizo, making black beans and an apple salsa with it as it is one of her family’s favorite. Gordon reminds her that she is a serious competitor in the competition but she doesn’t think she is. She has 32 minutes to get herself in the top 8. They are concerned about Subha who doesn’t even have any sausage in the casing yet, Gordon urging him to hurry up as he refuses to give up; everyone encouraging him to get going. They are reminded to think of the techniques and not overcook the sausages.

Micah is smoking his sausage, which impresses the judges. Bri is making pasta, saying the sausage is going to rest on top; but she made a simple garlic sausage. Gordon telling her to liven up the dish a bit. Subha makes a coriander based lamb and pork sausage along with rice; they are worried he only has 20 minutes to finish such a detailed dish. Aaron reminds him to pay attention to the evolution of his dish. Jamie is told putting through the meat through the grinder twice could have been a mistake but he says it has the texture between a regular sausage and kielbasa. With 10 minutes to go, Nick tells Sarah that her sausages are cute. Gordon goes to see Micah who is a “smoking gun” making smoked wild boar and elk sausages; saying he got the idea from his uncle who is a hunter.

Dorian thanks Nick for his compliments over how good her food smells. She wants to represent her Southern life in her dish. She made bean and tomatoes with a little garlic, she is poaching her sausages in a sauce that is inside the sausage. Aaron and Joe feel that is a very smart idea. Everyone feels pretty confident about their dishes, but Gordon is worried about Bri and her lack of flavor. Subha is burning his sausage causing the skins to burst; something they were just warned about.

Time is up and now its time for the Chefs to taste and inspect the dishes. To begin they call forward Sarah. She made wild Board, mustard, green apple and goat cheese sausage with braised red cabbage, butternut squash, and apple puree. Visually Gordon likes the color but there is way too much mustard. Joe says the sausage is the right consistency, well-executed and good job on the authenticity. Aaron feels it was well constructed. Gordon says the cabbage is spot on and it was a really good effort.

Subha is up next. He feels confident thinking this is the best dish he has made in the MasterChef kitchen. He created a lamb port sausage with korma and basmati coconut rice. Aaron feels the sausage look off-putting but hopes the flavor delivers, saying it is tasty, hot but well seasoned. Joe says the rice is overcooked and the sausage could be better; the flavors are good. Gordon says it is delicious but an ugly dish to look at.

Bri approaches with her dish of pork and garlic sausage with tagliatelle pasta and beurre monte sauce. Gordon feels she is the only one in the competition that wants to put them all on a diet. Aaron says everything that is there has been executed properly but it is boring. This was the opportunity to go crazy; Joe feels it was very safe with all the neutral flavors. Gordon reminds her this was a sausage competition, not a pasta one and the sausage was only five slices and very bland. She returns in tears, fearing she is in trouble.

Dorian brings up her dish which is a wild boar, fennel and apple sausage with cannellini beans. Visually the sausage looks hearty and the bean stew screams “dive in.” Joe thinks the garlic toast cheapens the dish, but Gordon disagrees. Gordon calls Joe a “fkn snob!” Joe says it tastes good, the flavors mix well and the texture of the sausage is great. Aaron says it is homey and loves it. Gordon loves the garlic bread, saying this is her on a plate, mocking Joe about being able to use the garlic bread to sop up the stew.

Micah feels he was very thoughtful about everything he put in his dish. He brings an elk and wild boar sausage with carrot and celery root puree with roasted mushrooms and carrots. Aaron feels it brings out the forest, campfires and he is excited about that. Joe doesn’t like the plating, but it suits the flavors he expects to taste on the dish; he is optimistic. They all taste the dish as Joe likes he used very gamey meats and has a nice balance. Aaron likes that he used pork in the sauce and the portabello mushrooms work. Gordon says it is delicious and one of the best purees he has ever tasted, incredible that a 19-year-old can produce such sophisticated foods.

Shari produces her dish of wild boar sausage with black beans, apple salsa, and chili lime crema. They are concerned about the crema being there and the black beans were a challenge to plate pretty; making the plate hard to look at. Gordon says she got the contrast right, done with a bit of flair and it was delicious. Aaron likes the salsa but doesn’t like the way the dish is composed. Joe tells her it shows her ability to create contrast, and it is very interesting for his palate.

Jamie feels this was a tough challenge and his plate looks like a mess. He made cajun sausage with fried okra and red beans and rice. Gordon says it is a mess visually, not attractive. Aaron says it simply is a mess with presentation as time got the best of him. Joe doesn’t know what to say about the sausage; the sausage is dry but worse than dry it is terrible; the flavor was unbalanced and not something he even wanted to keep in his mouth. Joe tells him the beans and rice is nothing he expected. Gordon says the sausage looks like a pate, but he loves okra and likes the flavor; tasting way better than it looks. Jamie apologizes.

Noah is the final cook to bring up his dish. He feels this is the first challenge he has done 100% of what he wanted to do. He made a lamb and pork sausage with carrot succotash, mashed potatoes, and Guinness brown gravy. Visually it has the good old Irish Pub feel to it on a cold winter’s night as Gordon can’t wait to get in there. Gordon tells him it is delicious and hearty. Aaron doesn’t know how he made this dish so light and acidic. Joe loves the Irish version of it with sophisticated flavors, telling him he did a good job.

After the judges speak privately as the cooks are on emotional rollercoasters. Almost all of them excelled and Gordon says the one who dropped the ball and knows who they are, asking them to take a step forward; something Jamie does. Gordon tells everyone to say goodbye to Jamie and go upstairs. Gordon tells him his dish didn’t make the mark as Joe says the sausage was dry and the dish was a disaster. Gordon tells him even though he struggled, but he had an amazing run, defying the odds in the dessert challenge. He thanks them for the experience, hugging each of them. Jamie feels Subha will be the next MasterChef because if he could help him out, he can win it all!