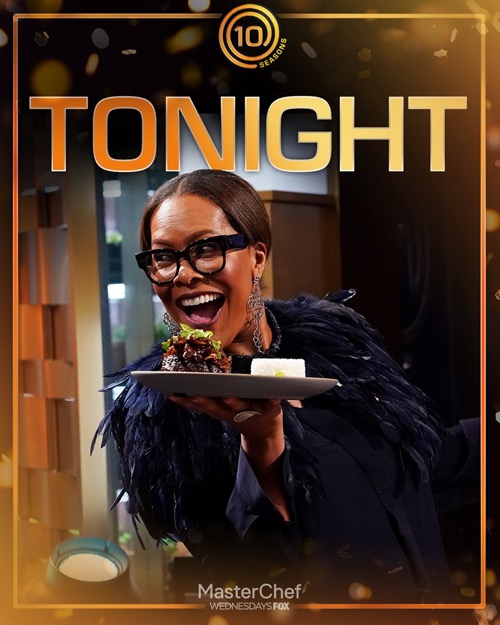 Tonight on FOX Gordon Ramsay’s Masterchef returns with an all-new season on Wednesday, June 5, 2019, season 10 episode 2 called “Auditions – Pt. 2; The Battle Round,” and we have your weekly Masterchef recap below. On tonight’s Masterchef episode as per the FOX synopsis, “Eight aprons remain in the audition rounds. The pressure is on as the home cooks rush to create their signature dish for the judges in just under 45 minutes.

A select few will have to concoct a dish so impressive that it wins over all three judges. See who takes the final aprons, marking their spot in the Top 20.”

The season 10 auditions continue with only 8 aprons left to be won. Noah from Georgia works in the septic business but he has a passion for food. He works on a southern burger as he gets the crowd going. He plates it just in time for Gordon to taste. He presents his entree to Gordon and the others. He wins an apron after they taste his burger and are in awe.

Shari, a stay at home mom, is up next. After marrying her husband, an Indian man, she has learned how to cook Indian food. She brings her dish of Red Snapper to Gordon and the others. She gets a yes!

With just 6 aprons left, the cooks keep moving with their dishes in the hopes of winning. Several cooks come out after being rejected. Charlie, a female bartender, brings Gordon and the chefs a very healthy dish of vegetables with shrimp. They like it but don’t feel she is ready this year until Joe gives his battle pass. She cries and heads out, ready to fight for an apron.

Two more aprons are given out before Molly brings her dish of skirt steak and broccolini to the chefs. Aaron believes in her talents and gives his battle pass after Gordon and Joe don’t see her potential.

Fred is ready to bring his dish to the chefs. He is working on a plated chocolate cake. Gordon tells him it better be delicious. His dish is beautiful and after the chefs taste it they are impressed. Gordon licks the plate. Fred gets an apron. Only 1 apron remains.

Gordon talks to the 19 who made the cut. Now they need to start the battle rounds. The three battle pass contestants step up to fight. They are given 45 minutes to create their dish. The clock starts now.

Micah is cooking his fish. Gordon tells him to stay focused. Molly is cooking her pork chop. She checks the temperature and it isn’t ready. Charlie is having trouble with her tortilla. She makes it just in time.

Charlie brings her fish taco dish. Gordon thinks she plated it well. Joe is glad he invested his battle card on her. It tastes great even if Gordon doesn’t like her use of vodka.

Molly brings her pork chop up to be tasted. It isn’t cooked all the way through. Micah brings his sea bass up next. His fish is perfect.

The chefs discuss. Micah is awarded the apron!