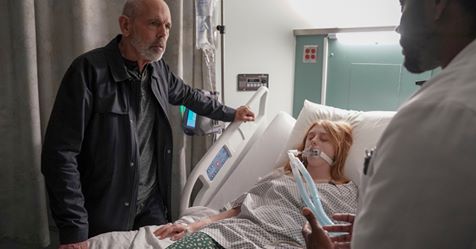 Tonight on CBS NCIS returns with an all-new Tuesday, May 21, 2019, season 16 episode 24 called, “Daughters,” and we have your weekly NCIS recap below. On tonight’s NCIS season 16 episode 24, “Daughters,” as per the CBS synopsis, “Fornell pleads with Gibbs to do whatever is necessary to take down drug dealers in the area after his daughter is hospitalized from a drug overdose; Gibbs is haunted by aspects of the case.”

Emily Fornell collapsed at a party. Her friends didn’t know what was wrong with her and so they rushed her to Mercy Point Hospital where they called her dad. Former FBI Agent Tobias Fornell and his daughter Emily have a complicated relationship. They used to be really close until Emily’s mother and then the relationship just sort of collapsed from there. Only Fornell still rushed to the hospital when he found out that his daughter wasn’t well. She came in blue and no knew what was going at first. Then the doctors ran some tests and they found opioids in Emily’s sister. She had taken drugs and was experiencing an overdose. When the doctors realized what was going on, they informed Fornell and also warned him that there might be some complications.

They needed to give Emily a medication to help get the drugs out of her system and they couldn’t rush the processor it might do more harm than good. The doctor was being very reasonable as he went over this with Fornell. It was Fornell that had a hard time comprehending what was happening. He initially refused to believe his daughter was taking drugs and, even in the face of inevitable proof, he still didn’t want to take the time to understand the actual process. Fornell demanded that the doctor save his daughter’s life and he pulled a gun on the man. Gibbs had to step in before Fornell committed to a mistake he couldn’t take back and luckily the doctor didn’t want to press charges.

The doctor told Gibbs that Fornell could be allowed back into the room if he left his gun behind and Gibbs promised that there wouldn’t be another incident. He took Fornell’s gun and handed it over to Torres when the rest of the team stopped by to give Gibbs an update. They had checked into Emily’s overdose and all of her friends say she doesn’t do drugs. They also believed that she might have been drugged at the party. There were several incidents on campus and so the team handed over what they knew to campus police, but neither Fornell nor his dead ex-wife felt comfortable about that. They wanted Gibbs to handle the case and the late Diane Sterling even came back from the dead to pressure Gibbs into taking the case.

Both of her parents wanted whoever drugged Emily to go to jail. They knew that if NCIS took over the investigation and ignored Gibbs’s rule about personal involvement that what they want could actually happen. Gibbs knew it as well and so he took over the case. Jurisdiction is damned. The team took on the case and they found several victims that were drugged at parties. The situation with Emily only spiraled like it did because she had a bad reaction. Otherwise, this predator on campus would have just carried on and in fact he probably still up to his tricks because there was another incident. Some guy almost overdosed and so the team went to go check on him. They wanted to know where he got the drugs and he said that he bought them off of Professor Ralph.

Professor Ralph was not a real professor. He sued to be a pharmaceutical rep and was fired for skimming. Ralph then became a drug dealer and he sells to everyone on campus. Gibbs and Bishop went to his apartment and they had to break down the man’s door when he refused to comply. The two of them found Ralph who clearly overdosed and surprises kept coming because they found a drugged up Emily in the bathroom of the late Professor’s apartment. Emily was brought around when they informed her that Ralph was dead and that’s when the truth came out. No one drugged Emily’s drink. She’s been doing drugs and no one in her life knew. She even kept it from her friends and she wanted to keep it from her father as well.

Emily said she came over and that Ralph invited her to party, but she added that Ralph didn’t do drugs. He said he never uses and so it was odd that he overdosed. The team checked the scene and it was a little too perfect. Almost like it had been staged. The team dug deeper and they found out that Ralph had been killed. Someone made it look like he overdosed and killed him while Emily was too out of it to care. Emily had no clue what happened to Ralph and she was going to keep the whole thing secret from her dad when her dad walked in on her interrogation. He found out that his little girl has a drug problem and he wanted to know how it all began. He couldn’t go after the dealer and so he wanted the supplier.

Only Emily wouldn’t say anything. She ran off and told her dad to stay out of her life. Her friends, on the other hand, were a little cooperative. They claimed that someone drugged Emily because they didn’t want anyone to know about her problem and one friend, in particular, lived with Ralph. He may have been the one to introduce Emily to Ralph though he said it was Emily that connected Ralph to the supplier. The only thing he knew about the supplier was that he was some podiatrist in Littleton. The team checked Ralph’s financials to see if they came across a doctor and Fornell had come back because he said he wanted to help. And that had been a lie because Fornell just wanted information.

Fornell wanted the information for himself and not because he wanted to share it with the team. He had seen Ralph’s credit card statement and he recognized Emily’s old doctor for bone spurs. Dr. Berman was a podiatrist and he has an office in Littleton. The details all added up and so Fornell went to go confront this guy on his own. He blamed the doctor for getting his daughter hooked on drugs and frankly the doctor didn’t know what he was talking about. Dr. Berman was Emily’s doctor and then she told Ralph who made an appointment with Berman just to steal his prescription pad. Ralph has been prescribing himself the drugs he needed and he knew an unscrupulous pharmacist that knew how to look the other way.

The team brought in the pharmacist next. They grilled him over the drug side business and confronted about where he was getting the drugs from. It sure wasn’t formed US-based company and this meant he was getting it over the border. The pharmacist hadn’t wanted to talk, but with the right incentive, they got him to talk and close down this drug business that was operating in their backyard.

Gibbs also got rid of Diane’s ghost and while he told Fornell she had simply been a hallucination – Fornell talked to his daughter about getting help and she said she heard the same thing from her mother who she say after her overdose.

And so Diane really did come back, but Gibbs didn’t know that when he saw Ziva and at first he thought she was a hallucination as well.