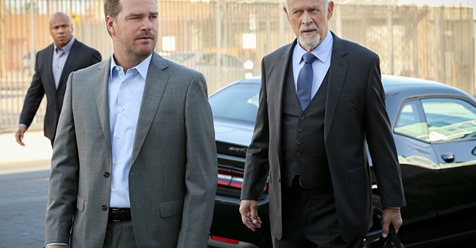 Hetty gave the team a mission without any information whatsoever. All she did was that it was a favor for Navy Admiral Kilbride and that the team were to meet him at his hotel, but she left out certain parts, like how the team was supposed to protect the Admiral. They were his protection detail at an event in which he refuses to describe. Kilbride only needed two of them to act his bodyguards and the other two were to keep his prisoner safe. That’s right, his prisoner! Kilbride also refused to name the prisoner and so again he was leaving the team with two few details going forward.

Someone had to say something, so they all started asking questions and they got him to crack some if not ¾ of the way. Kilbride never named his prisoner. He did, however, say that he was going to an event to purchase a high-ranking intelligence officer. He needed to buy her back before the enemy gets her and he was bringing millions of dollars with him. Kilbride didn’t name the officer nor was he helpful with anything else. He just said he was running this mission and the others simply had to fall in line.

Kensi and Deeks stayed with the prisoner. The guy was panicking. He was squirming around and he clearly wanted them to take the tape off his mouth. Deeks toyed with him for a while before Kensi stepped in and she removed the tape. Their prisoner then said they all had to get out of there. They were supposedly going to die if they stayed and so the guys put the tape back on to shut him up. They didn’t know who he was or what he was guilty of. They knew they couldn’t trust him and so they tried finding out his identity on their own.

They took pictures that they sent to Eric and Nell and they learned that their prisoner has several aliases. None of which could be trusted of course. They also took pictures of his teeth to see if they could identify him that way, but before they could send those pictures, they heard knocking at the door and it was some sketchy dudes. There were the ones that David had been warning them about. David, also they had to get out of there before the dudes killed them and so they all jumped off the balcony into the pool.

It got them out of the hotel. It also gave Kensi and Deeks the means to drag their prisoner back to the boathouse. They tried to pressure him to get him to talk, but he knows that they don’t know anything. They have no idea why Kilbride took him prisoner. They couldn’t even prove if he committed a crime and so their prisoner kept his mouth shut. Kensi and Deeks had nothing else to do so they waited to hear from their friends. The same friends that went dark several minutes ago with no way of checking on them.

But the guys were okay. Sam and Callen went with Kilbride to a meeting where he offered twelve million bearer bonds in exchange for Jess Adams. Adams was the intelligence officer that was kidnapped. The things she knows could also leave the US Government defenseless and so Kilbride desperately wanted her back. He tried to make a deal with a millennial that was seeming in charge there and unfortunately the wannabe thug was useless. He wanted Kilbride to leave half the money as a sign of good faith and said that they could get the other half at the auction.

Kilbride was never going to allow for them to hold an auction, but he and the others couldn’t deal with the kid because they wanted to get into the contact with the real boss, so they kidnapped the millennial. It turns out the kid was the boss’s son. Adnan Das was the son of self-made millionaire Vihaan Das and he really was a wannabe. He wasn’t tough at all. Adnan also thought he would have rights in detention and so that’s when he taught him how the boathouse works a little differently. They also left Adnan with their other prisoner and went to talk to his father.

They told Vihaan that they could exchange his son for Jess Adams. They even got him frantic enough that he made phone calls right after they left and so that’s were faced with a real problem. Adnan had apparently died in custody. He had some kind of cardiac event and there was the nothing the team could have done about it, but they couldn’t tell his father that he was dead and so they pulled off a “Weekend At Bernie’s”. They pretended the kid was still alive by putting sunglasses on him and used his corpse into luring out his father.

Vihaan brought Jess and they brought Adnan’s body, but before Vihaan could get close enough to inspect his son, the team ambushed him and killed his men. They then freed Jess Adams and delivered the unfortunate new to Vihaan.

Vihaan’s son and his empire were now dead, but it was a win for the team and it seemingly brought them closer to Kilbride who held his own grumpy charm. And maybe he’ll be a little forthcoming in the future.