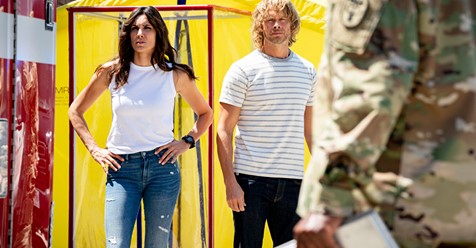 Also, Kensi and Deeks investigate the murder of a petty officer who recently departed the USS Allegiance and is linked to the Ebola exposure.”

Sam and Callen were back onboard the USS Allegiance. This time they were escorting the new Special Afloat. His name was Special Agent Navid and he seemed a little on the earnest side because he wanted to make a good impression. He introduced himself to Captain Douglas. He also took the time to get the lay of the land and so there really was nothing wrong with him. Therefore, it didn’t make sense why one seaman came across as hostile.

The officer took notice when Navid revealed his name. Now, that could be because of his Arabic descent or the guy could still be feeling raw after everything that happened. The ship was attacked from within by members of ISIS and those same traitors almost caused war. The seaman in question could be remembering that as he heard the name though doesn’t discount him from actually being a racist.

Either way he made sure to knock into Navid as Navid was leaving. The man simply wanted to go to his cabin and put his stuff away and so there was no need to give him attitude. Navid thankfully didn’t see that arm bump for what he what it was. He thought it was a coincidence and he ignored it. He was more focused on unpacking. He had left behind his wife as well as his three kids to take on this mission.

He was also going to be gone from them for almost a year. Navid was already missing them and so the guys tried to make him feel better. They talked to him over his last posting in Japan and they were also cracking jokes with their team still on land. Everything was just going great until the team passed on word that the guys’ ship was quarantined. It was considered hazardous because a crew member that recently came off the ship was found dead.

Lt. Grant was murdered, but one of her killers was found dead of Ebola and she had some of it in her system as well. It was believed that she passed it onto her killer and that’s how he contracted it. So, the investigation was considering the ship as the starting point. The ship did dock overseas and there was the whole spy scenario. There could still be spies on board the USS Allegiance. They could have picked up Ebola on purpose and then spread with the intention of causing an outbreak.

Only the investigation got wrong. They operated under the assumption that the Ebola spread first on the ship and then the team on land later found evidence proving the contrary. Kensi and Deeks found out that Grant was being held captive for a while. Their disease expert said that Grant wouldn’t have been systematic first and so her kidnappers were holding her until then. They planned on releasing her back into the wild when she was truly sick and they didn’t count on her fighting back.

Grant was military trained. She wasn’t going to just let herself die and so she tried to escape. She got out of the warehouse where they holding her. She also had to start running on foot. She was followed from the warehouse and got into a fight with the man that would kill her. That’s how she was able to spread the disease to him. The team also believed that a second captor was still out there and so Kensi and Deeks started looking for her while the others were supposed to pass on the good news.

The team called Sam and Callen to tell them that the ship was safe however by then someone began showing signs of Ebola. It simply didn’t make sense. No one knew why people were getting sick on the ship and so the guys were doing their best to hunt down a lead while Namazi and Nell were assisting Kensi and Deeks. They soon found their second kidnapper. She was a member of Mashriq Army and she bought a bus ticket with Grant’s credit card.

Kensi and Deeks picked her up as after they diverted the bus. They also had to let the military disease control be the ones to physically touch. She could be sympathetic as far as they knew and the couple couldn’t risk getting sick. They found out that Kensi was late. The couple thought she might be pregnant, and they were playing safe until this case was over and she could take a proper pregnancy test.

Back on the ship, things were going from bad to worse. More sailors became sick and the one guy that had a problem with Navid – Petty Officer Stephen Lamb – was considered to be a possible spy as well as an all-around jerk. He refused to comply with Navid’s orders. He was even going to detain him when Lamb became systematic and had vomited on Navid. It, therefore, brought Navid face to face with the virus.

He was now at risk of becoming sick. There was nothing he could do about it so he did his job and he got answers out of Lamb. Lamb, as it turns out, was not a spy. He was merely gullible for befriending a spy and so he was in the clear. For just that one thing. The rest like him being jerk was very much true and he only stopping being one when faced with possible death. And so there was that at least.

Kensi and Deeks meanwhile had gotten a better picture of what happened. There was a third kidnapper out there and he was possible infected because he was the one that got into a fight with Grant. The guy that died was the carrier. The Mashriq Army got the virus out of their country by infecting one of their own and using him as a means to get the virus into the United States. They were then going to infect Grant who being sick would have gone to the Military Hospital.

Grant could have killed hundreds without any finding out, but she died and the mission seemingly failed. Kensi and Deeks even caught their last guy and so that should have been the end. Except no one knew how the ship became infected. Grant wasn’t injected with the virus until after she landed in LA. She wasn’t anywhere near her friends and so the doctors onboard had tried testing everyone for Ebola. And surprisingly they were all clean.

The people onboard were showing symptoms because it was all in their heads. They let panic and fear convince them that they were going to die. And after they had been reassured that they were in fact in the clear, their symptoms began going away and thankfully Lamb remained humble.

He did judge Navid based on the man’s ethnicity and he apologized for it. Luckily, almost dying had shown him what a great person Navid was and so the two were on the road of becoming friends.

And back on land, Kensi found out she wasn’t pregnant but she realized she and Deeks needed to talk about where they stand on having kids.