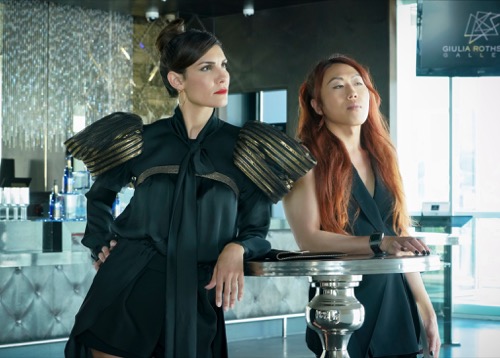 A domestic disturbance led to a break in the case. The case itself was the theft of a forty million dollar painting called “the Cube” and it seems the couple that was arguing had taken a picture of themselves with that said painting after the painting was stolen. Therefore, this couple either had a hand in the theft or bought it on the black market. The couple was later identified as Luis and Lucy Garcia. They had been fighting about orange of all things when their fight got the better of them and they started throwing things around.

The one thing they didn’t throw was their paintings. The couple was collectors and so there was bound to evidence of other fenced arts. But the reason this became a case for NCIS was that Hetty had been interested in the painting. She and most of the intel community believed the painting once belonged to Saddam Hussein. It went missing after he was caught and it was again believed to have been used to fund terrorism. There were plenty of terrorist cells out there that still consider Saddam a hero.

Any one of them could buy, trade, steal or sell this painting. This is why it was imperative that the team found out what the couple did with it and to do that they had to get pass LAPD who assigned this case to their Art Theft Detail Department. There was one detective who really didn’t want to hand over her case. Callen and Sam forced her to when they said this was a matter of National Security and so she threw in a remark about them deserving Detective Deeks. Deeks was sort of notorious back with his fellow detectives.

Most of them consider him a problem because of all of the shady things he’s done. Meaning the detective’s remarks about him and NCIS deserving each other was technically an insult. A rather crude one at that. The boys didn’t mind it however because they love Deeks and now they also love upsetting this one detective. The boys first wanted answers from the Garcias. The couple had clammed up following their arrest and they proved to be completely unhelpful. They said they had a painting either from a week to three months.

The couple swears they didn’t remember anything else, but the team received help from a different quarter. They ran into an insurance investigator. This investigator, Katherine, was there to track down the painting because it was part of her job and she was a lot more help than their search team. Katherine found out the couple use Bouchier Auction House. It was the premium auction house in the city and the clientele there was heavily protected. They weren’t going to tell NCIS anything if it hadn’t been for Katherine.

Katherine had an in with the auction house. She also knew they had to talk to her friend there because the person that originally owned the painting, Jean Chu, had bought the painting through some backdoor deals from that same auction house. Everything seemed to point to Bouchier. The team even thought maybe the painting had been returned there and sadly it hadn’t been. Katherine’s connection could only dream of having the painting again. She almost burst into tears just knowing it was still out there and so this auction house would have clearly have jumped at the chance of buying this painting back.

It didn’t seem to faze them if it was illegal or not. That’s how much people cared about this one painting and yet the team didn’t think much of it. They thought the painting looked like a child had done it. It was because they didn’t get all the hype around it that they failed to realize how serious this painting on the black market was. It was only later that Nell found out the Garcias traded the painting for counterfeit drugs. They had apparently used a middleman and that’s how they got the painting in the first place.

Deals on the black market were handled through a middleman. It stopped either side from figuring out who they were dealing with and it protected them as well. This way no one could testify against the other. The team couldn’t proceed without that identification and so they set up a sting with Katherine’s help. They set Kensi as a major art collector. She had to pretend to be interested in wannabe artists and then she had to ask for something off-market. She had to convince the curator to hook her up with the illegal art.

The ones sold on the black market. Kensi was off doing that when the rest of the team received news from Nell. Nell had found chatter surrounding the painting and the conversations on the dark web made it seem like the painting was still in LA. Nell handed Callen and Deeks an address and unfortunately, there was a little too late to get the painting back. Someone had escaped the house mere moments before they arrived. The team was now trying to connect the house to any one person and as it happens there was one connection to Christina.

Christina had been Katherine’s friend at Bouchier Auction House. She also has a side business that no one knew about and it turns out the team inadvertently tipped her off when they went to her for help. Christina must have panicked afterward. She tried to offload this painting herself without an intermediary and the team found her when she was meeting with a couple of shady people in the park. The team had wanted to wait and see what happen, but Christina’s friends tried to kill her so the team was forced to intervene.

They saved Christina’s life by stepping in the way they did. They also captured the men that attacked her and those guys weren’t talking. If the team wanted answers, they had to go directly to Christina. They asked Christina about the meet. She said she was trying to sell the painting to a Chinese tycoon by the name of Oliver Yang and that his men turned on her because she lost the painting. The painting was supposed to be at the house. She doesn’t know where it went and so the team asked her who had it last.

Christina told them the last owners were the Ajams. The Ajams were a family from Saudi Arabia and they wanted to use the painting to receive a cache of explosives. As the team would later learn, the Ajams stole back the painting in order to get the weapons they wanted. They were even in the middle of a deal with a South American team when NCIS busted it up and arrested everyone.

They even got back the stupid painting.

The painting was returned to Jean and it had been Jean that revealed Katherine wasn’t exactly an insurance investigator. She technically owned the insurance company. So, she went out into the field tonight because she had been looking for some adventure.