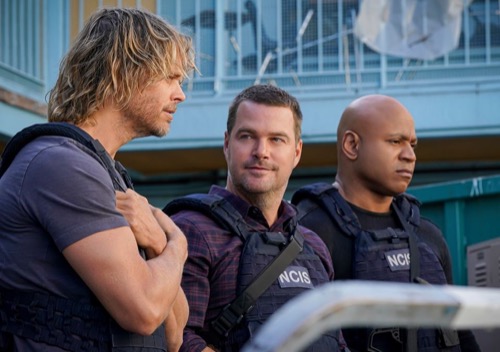 Nell had a case for the team. She was alerted when Lieutenant Paul Tatum had failed to make his destination. The lieutenant was known to be driving up from San Diego and he was in town for a meeting at the VA. Tatum happens to be an administrator. He was supposed to be at the meeting to handle any in-house affairs and unfortunately, he never made it because he was involved in a car accident. Tatum was found at the side of the road by a fitness instructor. The instructor tried to find out if Tatum was okay and as he was checking on the passed out man – he was attacked.

Someone used a stun gun on the only witness to the car accident. It was also the last time anyone had seen Tatum and it is believed that he either wondered or worst he was kidnapped. Kensi and Deeks went to the scene. They read from the police report that the instructor was doing a fitness video when everything happened. The guy was recording it all with his cell phone and he even had it posed. It wasn’t on him when he was attacked. He didn’t even realize it was gone until he came to and tried calling 911.

The instructor thought his phone was stolen by a homeless guy he ran into earlier. Deeks and Kensi then tracked down Isaac and they found out he hadn’t taken the phone. He did, however, take down the license plate of the car that drove off from the scene. Nell used that to trace the car and she found footage of a passed out Tatum in the passenger seat of said car. She and therefore the team now know that Tatum was kidnapped. Making it a National Security issue. Tatum as it turns out used to be a Nuclear Engineer.

Tatum has inside knowledge of the US Nuclear System. He only retired from the job because he developed diabetes and that’s when he was forced to take a desk job. He could have resented it. Only he never did and his coworker said he was just as committed to his job as an administrator as he was to being an engineer. Tatum it seems was one of those people happy to serve. He was deeply involved with his current position and his job there could also be a security issue because someone like Tatum has access to thousands of files on sailors.

He knew their locations as well that of their families. Someone could have kidnapped for that information and so the VA locked him out of the system. It had taken hem about an hour to do so. Which was apparently all the kidnapper needed because they gained access to his files and they went digging. Nell was looking into what they went digging for. The team meanwhile was looking for Tatum. They traced the car to a shady rental lot and they got the dealer to give them as much as possible.

They also tracked down the car where they found a very confused Tatum. He was left out on the open and his blood sugar was low. The guys gave him a candy bar that seems to do the trick. Tatum was soon back to his old self and he had no memory of the past five hours. The guys tried to tell him that he needed to go to the hospital and he swore he didn’t because he stays on top of his diabetes. He has an app to manage his blood sugar. He logged into his system and he found it had been wiped clean.

He had no idea how that was possible. He explained that the app was connected via Bluetooth to his laptop and the guys figured out pretty easily that he had been hacked. They then had Nell check it. She later found evidence of his phone being hacked from a library and the images of the guy doing it happened to match the identification of the car renter. His name is Zachary Vale. He was a loner who couldn’t hold down a job and he had a message from the Koran found on his fridge. This message just happened to be something heavily borrowed by a jihadist.

His extremist views would also explain why a Naval Officer’s car was bombed. Nell had followed Vale’s digital footprint and she found out that he was targeting members of the Special Forces in revenge for Osama Bin-Laden’s death. Vale was also going it alone. He refused help from everyone on the dark web and committing these murders happened to profitable for him. He was earning fifty thousand for each officer he kills. The team then theorized that he could be faking his ideology for the money.

A guy like Vale doesn’t just join a jihad out of the blue. He was either looking for deeper meaning in all the wrong places or he was looking for a payday. Ultimately, it just didn’t matter in the scheme of thing. The team needed to find Vale and to do it they used security footage of when he tried to plant that bomb. They saw for themselves that he was using a smart bike. A smart bike he bought by stealing the credit card information of his nice neighbor and so they tracked down the bike to an abandoned school building.

Vale had been using the seclusion of the building to create his own bombs. So, the team armored up and they moved on the building. Kensi and Deeks went after Vale’s helpers because he apparently was working with two others and in the meantime, Sam and Callen went after Vale. Vale had holed himself up in a room with bomb parts. The guys distracted him by flying a drone into the room and when he tried to shoot the drone down – the guys used that opportunity to take him out. Vale was now dead and luckily the team killed him before he could target anyone else on the hit list.

The scene was lockdown. The team even got a few laughs out of it and more than one person decided to borrow Deeks’s new motto of never complaining.