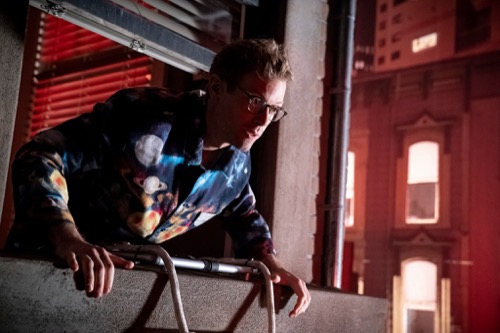 Eric was the victim of a home invasion. An armed group showed up at Eric’s door and he was lucky because he was able to get away by outsmarting them. Eric set off his alarm system. The sound alone annoyed Eric’s attacker and it distracted them which gave him the chance to make an escape through the window. Eric did end up getting grazed by a bullet. It was nothing major and he was otherwise ok. No, the hard part wasn’t in the escape. It was when he was getting help. Eric tried to flag down a police car.

Eric threw something at their window because he thought that would grab their attention. He instead broke the window and the police later arrested him for vandalism because of it. Thankfully, Eric was given the chance to explain himself. He told them what happened back at his apartment and they checked out for themselves. They went to his apartment. They saw the destruction and they knew Eric was telling the truth. They simply didn’t know what to do with the information. SFPD handled typical crimes. Not potential espionage or anything involving the federal level.

Eric wasn’t just Eric after all. He was NCIS and the police were later happy to sign him over to a couple claiming to be NCIS Agents. The police thought NCIS was handling their own problems, but they, unfortunately, Eric over to his kidnappers. The people that broke into his apartment had tried to kidnap him back then and when that failed they then pretended to be NCIS to kidnap him that way. Meanwhile, the NCIS Agents were trying to track down Eric. Sam and Callen showed up in San Francisco.

They were the ones supposed to be picking him up. When they heard he had already been picked up, they quickly realized their friend had been kidnapped and they began to investigate his case. They went to his apartment. They found shell casing and realized they were normal bullets. They were actually tranquilizers. Eric was grazed by one and it could explain why Eric was struggling to stay awake back when he was at the police station. There was also an added bonus to Eric being hit. It meant his kidnappers were, in fact, trying to fix his drowsy problem when they later gave him coffee and put in a pick me up.

The boost was drugs. It was supposed to lower Eric’s inhibitions and luckily it wasn’t enough to leave him too exposed. Eric was still somewhat self-aware. He realized what was happening and he escaped his kidnappers for a second time. He was even on the run when he began hearing voices. It left him dazed and confused to the point where he didn’t know where he was or what happening and so Eric made sure to hide while he still had the chance. He was in hiding while his friends were still trying to figure out who would want to kidnap him.

Eric had left NCIS for a sabbatical. He received a job offer from a startup called Logic Wide and the offer was too good to pass up. Eric got Hetty to sign off on it and he went to San Francisco. Sam and Callen checked out this company. They tried to get someone to talk to them and it seems the company was going to put up a fight. They all signed strict NDAs and no one was going to talk to someone outside the company. If the team wanted answers out of them, they were going to have to steal them.

No one on the team knows what Eric was doing at the company. Not even his own girlfriend knew and yet she thinks it has something to do with Hetty. Hetty was very mysterious. She must have given her permission for a reason and so Nell tried to find out what it was. She asked Hetty what Eric was really doing in San Francisco and Hetty refused to say. Hetty believes that Eric can handle himself no matter what happened and Nell disagrees. She thinks Eric wasn’t a field agent and that he should have been protected. And she wasn’t wrong.

Eric got involved in something he couldn’t handle. The company he works for had set up his alarm system and it seems that the same system was being used to spy on him as well as several other employees. Kensi figured that out when she talked with the man that owns the company and someone used the exact same device to spy on him. Whoever was watching him had sent a couple of armed guys to his place. So, Kensi was forced to hide in a panic room with a billionaire. She was off doing that while Eric was coming too in a garbage can.

That’s where he hid. Eric stayed there until the drugs left his system and he left when he started to feel better. Eric then tried to find help afterward. He spotted a surveillance camera and made sure he could be seen because he knew Nell was monitoring everything. And it worked too because Nell spotted him, and she sent his coordinates to Sam and Callen.

The boys showed up right as the fake agents did and so Sam and Callen were able to arrest the fakes. They also got the real story from Eric. Eric found Shaun Reynolds owned the company, but that it was being operated by the Chinese who were going to build the company up and then sell it to the US military with a backdoor sown in.

And even though he wasn’t a field agent, Eric proved that he could handle himself and that he could take down a company used as a front for Chinese Intelligence.