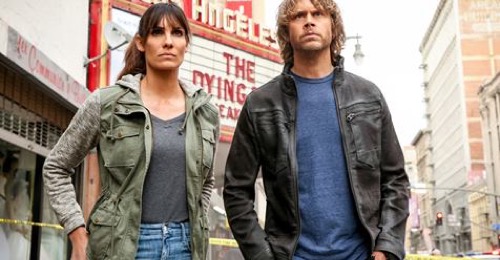 Tonight on CBS NCIS: Los Angeles returns with an all-new Sunday, February 17, 2019, season 10 episode 15 called, “Smokescreen, Part 2,” and we have your weekly NCIS: Los Angeles recap below. On tonight’s NCIS Los Angeles season 10 episode 15, as per the CBS synopsis, “The team continues to search for a terrorist cell in L.A., while Callen and Sam remain trapped in a movie theater after multiple bombs have detonated and every remaining exit is wired with explosives.”

The attack at the movie theater wasn’t a simple bomb. The terrorist had actually placed various bombs all around the theater and even the exits weren’t considered safe. Everyone that had been trapped inside was told to move to the main lobby, but there had been a few stranglers that tried to ignore and leave through the back door. There was one fatality of a guy that tried to leave with his stolen items from the concession stand and there had been two children that had been close to the following blast. They hadn’t been hurt and so, unfortunately, they had been trapped under some rubble until Callen found them. The kids had been trying to leave because they skipped school to go to the movies and didn’t want to get in trouble with their parents.

The kids were Elias and Eddie. They were brothers and it had been Elias’s job to look after his little brother Eddie, but he had been too injured to move on his own and so he made sure Callen safeguarded his brother before he himself was moved. Callen got both of the brothers out of there and soon everyone had been cleared to leave through the front door. Callen had found his partner and Sam had been okay yet it seems there was some information that Sam found that he knew he should share. It turns out their guy Abbas Jalal might not have been the bomber. He could have been pushed into doing things he hadn’t wanted to do and so he hadn’t been the one to pull the trigger on the bomb.

Sam remembered how Jalal looked in his final moments. The man had seemed scared and so Sam believes Jalal would have taken their help if he could. Thus he didn’t sound like a man that would blow himself up. Sam had talked to the team outside and together they determined that the bomb was most likely set off remotely. The real bombers would have needed clear sight to Jalal and so he would have been across the street at a restaurant. There were no cameras and so the team had no idea who pulled off the bomb, but they could ask the person they did have and that meant Wasim Ghulam was questioned. The man didn’t want to talk and had needed to be threatened with solitary confinement before his fear of confined spaces forced him to talk.

Wasim said Jalal was never a soldier. He wasn’t even that important to the Mashriq Army because he just handled their money and so Wasim was asked about Jalal’s ties because there must have been incentive to for him to get involved. The only one that Wasim could think of was Omar Azim. Azim had been like a father to Jalal and he didn’t like the Mashriq Army. He didn’t want Jalal involved in either because Wasim could remember Azim badmouthing them. Wasim hadn’t thought much of it because again Jalal wasn’t important to the cause and neither was a movie theater. It wasn’t what the Mashriq Army were about because they fought to get “justice” for their slain loved ones.

The team looked for Azim for information on Jalal, but they found him dead at a warehouse. He had been held there as possible leverage over Jalal and he wasn’t the only body that was found. There were two others that had been stripped of their clothes and had no identification on them. They must have been important somehow and so the team had Nell did a background search to see where the guys worked. Their uniforms were taken because it could be important to the next attack and so Nell did her job. She found out the two men were airport baggage handlers. There was a lot of turnovers and no one would question seeing two new faces on the tarmac. And that meant the next bomb was going to be placed on a plane.

Sam and Callen dressed for the part. They pretended to be baggage handlers as well and had gone up to the guys claiming that they had been ordered to take over, but the terrorists weren’t willing to back found and drew their weapons. There was an exchange of fire before one of the terrorist tried to run off and so Callen went after him. He had been forced to engage in close combat with the guy and Callen the only one they could ask about the bomb, Only Sam had already found it. The bomb was activated in the fight and Sam didn’t have enough time to disarm it. He thought it would be safer to drive away from the planes as well as any sources of oil and he made it just barely. He drove the bomb to the brink of the fence and no one got hurt.

With another attack averted, the team began to question whether the Mashriq Army was involved at all. They had been told that the MA didn’t target civilians and that they didn’t include outsiders. There had been South African mercenaries used at the attack on the plane and that thing with Jalal didn’t sound like Wasim’s beliefs. It couldn’t have been him or his friend. It had to be someone else who wanted it to look like it was the Mashriq Army and who had an endgame that was entirely their own. Sam and Callen talked about it and they couldn’t see what was being planned with these attacks. Neither of them had been high in casualty and so what if it was the attacks were a smokescreen.

The real terrorist wanted all of Los Angeles to be in a panic because being frightened meant they weren’t paying attention, but smokescreens work best with a heist and neither of the guys knew of anything that was valuable enough to hire mercenaries. They had captured one mercenary alive and had never gotten the chance to question him because the FBI took over. The FBI and Agent Ross received orders from Washington that a team of highly trained interrogators was going to speak with the mercenary. They didn’t realize that there were more of them out there. The team had never found the semiautomatic weapons and they believed there were more mercenaries focused on the target.

It turns out the target was a person. A valuable prisoner was being brought to LA on a private plane and those were the only ones allowed in the air after the attack on the plane. Everything else had been arranged to ensure the mercenaries would get to this prisoner and that included the FBI transfer. The transfer had apparently never come from Washington and so it was ultimately revealed that Special Agent Ross had been operating on his own. He was dirty and the men he brought in were there to actually take the prisoner, but the US Marshalls received a little help from NCIS. The team came fully armed and they stopped the prisoner from being taken out by the mercenaries.

The team had great work and they saved the city, but there was still a question about if they should be disbanded and so Deputy Director Ochoa has a firm “no” when asked.

Ochoa believed the team was stronger together and that if anything all they needed was Henrietta Lang back.