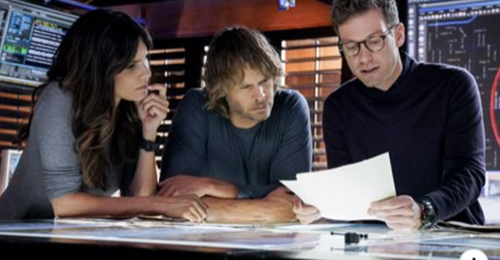 Tonight on CBS NCIS: Los Angeles returns with an all-new Sunday, March 24, 2019, season 10 episode 18 called, “Born to Run,” and we have your weekly NCIS: Los Angeles recap below. On tonight’s NCIS Los Angeles season 10 episode 18, as per the CBS synopsis, “Sydney turns to her sister Nell for help after her high-school crush, Andre Martinez is mixed up in a Russian plot to steal intelligence from the Department of Defense. Also, Special Prosecutor John Rogers conducts mandatory performance reviews with the team.”

Nell’s sister Sydney was back in town. Sydney sort of showed up randomly at Nell’s door and had asked to talk to her over coffee, but while that had been odd for the sister that has everything together, Nell decided to go with it. She followed her sister to the café and she was so wrapped up in her sister’s drama that she was running late for the office. Nell missed a meeting and it was about two workers finding a body in a dumpster. This body was identified as Mason Walker. He was handling access control to an important defense meeting about naval defense and Walker had been guarding the war room when he disappeared. He was kidnapped and a hard drive that held everything this meeting discussed was stolen.

Meanwhile, Nell was pushing her sister to go ahead with whatever was bugging her. Sydney had taken Nell to a café that neither of them used much less frequented, but Sydney for some reason pretended like it was her favorite spot and again things became odder when Sydney tossed Nell’s phone. Nell had been checking it to see how late she was for work and when she realized she was really late she showed it to her sister to say she had to go. Sydney didn’t take the hint and she actually dropped Nell’s phone in a pitcher of water. Only when she destroyed Nell’s chances at calling for help that Sydney admitted that she needed a favor. She asked her sister to help protect a man named Andre Martinez who they went to school with and who was running from something.

Nell didn’t know what, but it turns out Martinez was the chief suspect in Walker’s death and the theft of naval intelligence. He was recently hired an engineer and he wasn’t answering anyone’s calls or showing up for work in the aftermath. It had made her boss suspicious and she handed over his name to NCIS. NCIS was, in fact, looking for Martinez as he was meeting up with Sydney and Nell. Nell was caught by security cameras at this unusual donut place and it had worried Eric. Eric went looking for her when he realized she was late for work and finding her at a place he didn’t know about wasn’t something he was used to. And so he kept digging until he found footage of her with both Sydney and Martinez.

Sydney had gotten her sister into deep trouble. Nell heard from Martinez how someone tried to kill him and that he believed the DOD is compromised because of it and so she willing to help him. He needed to be driven to a location that wasn’t watched by surveillance nor easily tracked and that meant ditching her car after a while. Nell had no problem with it and neither did Martinez, but Sydney hated the idea of walking and her soon other reasons to complain. Like when Nell kissed Martinez to keep their cover or when Nell wanted a fuller explanation from Martinez about what happened the night of the theft. She found out that someone pretending to be a Lyft driver had offered Martinez a ride to his hotel and that he noticed that his key card disappeared right around then.

Martinez went back to the office to double-check and it was gone. His keycard had been stolen and later someone came to his hotel to beat him up, but he was able to fight the other man off and that’s when he went on the run. He wasn’t sure about contacting the other members of NCIS and he was only willing to do it because of Nell. Nell could talk to him plainly about his situation and he wasn’t going to get that with Sydney. Sydney has this huge crush on him and she’s had it for years. Its what drove her to help Martinez and so she had needed her sister to put out that they could die or go to jail. Sydney didn’t even think about any of that when she offered to help Martinez and roped her sister into it. And so hearing the truth made her even grumpier than before – she didn’t even like Nell’s idea to contact Eric.

Nell graffiti a car and had the dumb teenager that it belonged to casually drive it around on the same street over and over again. It worked, too. It got back to Eric who was all worried about his girlfriend hanging out with an accuses murder/traitor/ potential rival. He had seen the image of Nell kissing Martinez and that’s made he try to look for a silver lining. He dived into Martinez’s background and that’s when he learned the man wasn’t a traitor. He could be the other things, but the real traitor was his boss, Commodore Kang. She “forgot” about several phone conversations she had with Martinez and then went on to ditch her security detail. So the guys followed her and found out she was in contact with the Russians and that she was either selling them the information she stole or had already sold it.

The team knew that Martinez was in the clear and so they set themselves on arresting Kang as well as her Russian friends first, but while they may not have meant for it to happen, Nell and her gang got caught in the middle of a battle of NCIS vs. the Russians. But the Russians were no match for the team. They were able to arrest them and they passed on the happy news to Martinez that he was in the clear.

The last thing Nell did was explain herself to Eric and it turns out he didn’t mind the kissing if it was for a good reason.