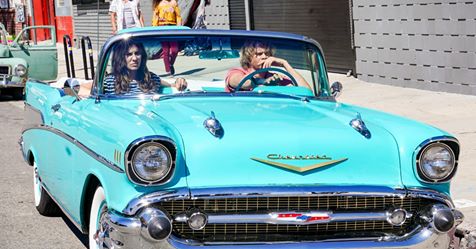 Siberia – A man is dragged through the snow in Siberia. An officer commands his help. They are headed to warmer climates.

Hetty sits on a bench. She reads from a book. Callen wants to know what Anna is up to. She is making some clever moves, moves like Hetty would make. He wants answers. Hetty cannot give him any.

The team meets. They are headed to Cuba to help Anna who has sent an SOS. Callan sees a photo in the files. His father is still alive. They head out in 24 hours. Callen calls Alex to tell him he found him.

They arrive in Cuba. They plan to meet a man about the weapons they need. Back home, Nell is nervous about the team getting hurt. Nate reassures her they will be fine. They hug. Rodgers shows up. He wants to know why they are in on a Sunday. They try to cover for the team.

Callen and Joelle sit in a restaurant ready to meet a man named Lionel. Lionel arrives. He stalls. Joelle wants to leave. Two cars pull up. Joelle and Callen are taken away. The rest of the team watch from a distance.

Nell and Nate try to track them. They think they might have to tell Rodgers.

Hanna and Deeks have Lionel. They question him. He didn’t want this to happen. He fears Vulcough. Meanwhile, Callen comes to and face to face with his dad. He is being kept for Russia. Soldiers come in. Callen and his father are taken for a walk where they see a man being beaten. Callen’s dad knows who he is. On the outside, the team is with Lionel watching the place. They need to find a way in.

Back in their cell, Callen’s father shares that he knows the man. Before he can share they are both brought back out to see Joelle and Hannah. The men shoot them both. Callen screams.

The men strap Callen to a chair. They cut off his air supply and beat him as his dad watches. Vulcough shares with Callen that his father sent him away but chose to raise his enemy’s son.

Hanna finds an entrance with the help of Nell and Eric. Rodgers arrives, busting them talking to Lionel. He wants answers.

While Callen’s father is taken face to face to meet with his enemies son, Callen pretends to be injured in the other room. Callen’s father and the man communicate with their hands using a secret code. Vulcough sees this and breaks into the room. Callen’s father and the man take out two of the guards. Feet away Hanna arrives after having broken in. In the gunfight, Callen also frees himself. He heads to find his father who took a bullet for the other man. Callen comes across Anna and Joelle. They are alive. Vulcough wanted him to think they were dead.

Nell and Eric discover there is chlorine gas on the grounds. Moments later after the team find their way to one another they limp to safety as gas pours through the vents. Vulcough is left to die in the building.

The team makes their way outside to see a chopper. Rodger called them help. Anna tells Callen she is staying in Cuba.

Back home, Hetty visits Callen at the hospital. His father is there and stable for now. She stays with him while Callen goes home to rest. When Callen returns back to the hospital his father asks to see his daughter, not Alex, the other daughter. They visit Hannah’s grave.

Callen visits two graves at the same site, Hannah and his dad’s.