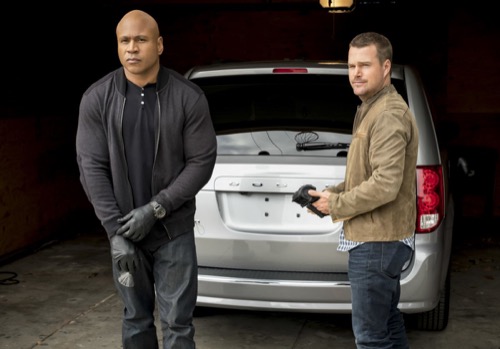 Tonight on CBS NCIS: Los Angeles returns with an all-new Sunday, January 6, 2019, season 10 episode 12 called, “The Sound of Silence,” and we have your weekly NCIS: Los Angeles recap below. On tonight’s NCIS Los Angeles season 10 episode 11, as per the CBS synopsis, “The chief of logistics for a naval weapons station collapses on the job, and the NCIS team must determine if it’s a terror threat or a stress-induced breakdown. Also, Kensi and Deeks research different honeymoon locations.”

Commander Valerie Torres passed out during a meeting at the Naval Weapons Station Seal Beach. Everyone believed that the Commander would recover and under normal circumstances, it wouldn’t have even required an investigation, but what caused the Commander to lose consciousness wasn’t normal. She had complained about hearing something before she passed out and that coupled with her past belief that someone following her had led to everyone becoming concerned. They all wanted to know what happened to the Commander. To know if she passed out because of something medical or if she passed out because someone had really been targeting her. And so NCIS was called to answer that question.

The team first decided to check in with the Commander’s husband. The husband was a prestigious professor that had been out of town during the incident and he flew right back to be with his wife. She never told him who she suspected of wanting to hurt her and so all the husband knew was what the doctors told him. He said that the Commander didn’t have a stroke or a heart attack and so far the doctors hadn’t found anything in the tox screens. It seems the doctors were just as stumped as everybody else and so the team decided to test everything the victim came into contact with. They went back to the Commander’s post and they looked at the secured footage of that meeting. They wanted to know if it was something she ingested and they couldn’t find anything to agree with this theory.

The Commander hadn’t been affected by the food and she hadn’t drunken anything, but both Callen and Sam had seen the exact moment she began feeling ill. She began showing signs around the time that two others felt ill and so why did they recover whereas the Commander did not? The team asked the other two to describe what they felt and they said they described symptoms commonly heard from during a sonic attack. It wouldn’t take much to attack someone with sound. There used to be machines needed and nowadays someone with a common microwave could bring about an attack. And so at first, the team thought this attack might have come from the building next door because anyone with a window could have done it.

Only the Commander later woke up and she was attacked again at the hospital. Whoever was behind it was mobile and so the team stopped worrying about the building next door but they did check the security footage of outside. Eric and Nell spotted a van that had been at the meeting, the hospital, and it had even been seen outside of the Commander’s home. Someone has been trying to harm the Commander for weeks and their persistent attack was why the Commander was the only one deeply affected during the meeting. She had been worn down and so the team wanted to know who was behind and even why they did it? The Commander wasn’t having problems at work and she didn’t have problems at home.

Neither the Commander nor her husband was having an affair. They also weren’t stressed because their only child was off at college and so there was nothing in their personal lives that indicated why someone was trying to kill the Commander. The Commander had still been in her hospital bed when again someone tried to attack her, but that time both Kensi and Deeks were able to run downstairs and they fought back. They got into a gunfight with the guys in the van and one person ran away while another died. The man that died was identified as Daniel Barnet. He didn’t know the Commander and they had never crossed paths because Barnet was an anti-immigration nut who part of a lunatic group that believed they needed to reclaim “their” country.

Nell and Eric used Barnet’s phone to track his movements and he had been in constant contact with a man named Hayden York. York was believed to be the second man that got away, but it still didn’t explain the attack and so they dug into both men’s background. The techies later learned that someone that worked with the Commander had played in a part in the attack and so they asked CWO Walter Purdue to come to the boat shed. He was asked why he bought burner phones for the men that targeted the Commander and he claimed he had no choice. Purdue said that he went to a loan shark to get money for his son’s expensive rehab and that the loan shark had sold the loan to someone who demanded repayment within a week.

Purdue hadn’t been able to repay the money and so he had come to an agreement with this man. This mysterious person that demanded something important had said that Purdue could tell him the security route for a ballistic missile and no one would harm Purdue’s family. Only Purdue didn’t have access to that information until the Commander was attacked and he took over her post. He then handed over what he knew to the thieves because he thought that they would never be able to pull off the heist. And it turns out they used their sonic weapon to get past security, so they did their hands on the missile and they could use it to target any Muslim gathering place they could now reach.

The team had used what they knew to track the missile and then the group behind the theft, but the moment they got close enough to be seen, they were targeted by the microwaves. They were suffering dizziness and were on the brink of passing out when Callen took a lucky shot. He shot the man that was used the microwaves and that stopped the sonic attack. It also allowed the team to get close and see where the missile was being taken. The thieves had tried to move to another location when they had been run off the road and so the team was able to reclaim the missile. They got lucky when it didn’t detonate and therefore they had celebratory drinks at Deeks’s new bar. Deeks hasn’t named yet and for once = after everything – the bar having no name didn’t bother him.