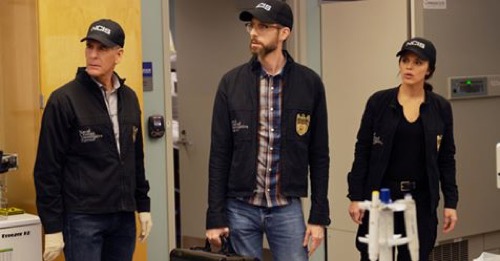 Tonight on CBS NCIS: New Orleans returns with an all-new Tuesday, January 22, 2019, season 5 episode 12 called, “Desperate Navy Wives,” and we have your NCIS: New Orleans recap below. On tonight’s NCIS: New Orleans episode as per the CBS synopsis, “While undercover, Gregorio joins a social club for military wives after one of the members is contacted by an ex-boyfriend on the FBI Most Wanted List.”

The Armed Forced and Navy Credit Union were hit. The bank robbers emptied the vault and took several items in the deposit banks, but what made this an NCIS case was the fact these guys also killed Assistant Bank Manager Nelson, Deets. Deets was a Navy Reservist. He also seems to have directed the robbers to a specific box and that’s how they came across one rigged with a dye pack. Deets was killed because he resisted and so everyone tried to make his death count. They checked around the area where the dye was released and someone must have been blinded afterward because they snagged their pants on the side of the vault.

It wasn’t much fabric, but Sebastian said the dye was made to burn almost to skin and so he was still able to get DNA. He learned that one of the bank robbers was John Manning. Manning had recently escaped from maximum prison and had even killed a police officer when he was back on the highway. There should have been no reason why John would risk robbing a bank. Not when he could have gotten away clean and so the team looked into his background. They saw that Manning has an ex-fiancée that lived in New Orleans. Her name was Ashley Curtis and she’s married to someone in the Navy and was also the mother of one.

The team didn’t want to believe that Ashley could have helped her old boyfriend, but old habits were hard to break and so they decided to go visit her at her home. Ashley hadn’t been expecting them and she later told them that she didn’t know that Manning escaped from prison. She claimed that she had put her past behind and that no one knew about her ex-boyfriend. She meant her husband as well. Her Preston was one of the good ones and that’s why Ashley dedicated her life to being a Navy wife. She was running a charity meeting for the Family Readiness Group at the time of the bank robbery and so the team had thought she was in the clear.

Only later Sebastian found she lied. He checked Ashley’s phone records and it shows that she has been in contact with Manning since his escape. She’s been calling his burner phone. Ashley also left a message that had been saved to the cloud and it revealed that she was panicking because Manning wasn’t calling her back. Maybe he decided to leave town without her or maybe he just didn’t want to share the money. The team didn’t know and they couldn’t bring in Ashley on such flimsy evidence. They decided to instead spy on her. Gregorio went to one of the meetings for Navy wives and she pretended to be a wife new in town. She charmed Ashley and she charmed Ashley’s friends.

The same friends that Ashley said were her sisters. Well, the sisters invited Gregorio to a Girls Night and what that meant was sharp shooting. They set up a course out in the woods and everyone got the chance to shoot at a bunch of empty beer bottles though no one was as good as Ashley. She was a great shot when she was drunk and so the team knew that she was a great shot when she was sober. They remembered that the bank robbers had been a group of three and that smallest thief had been an excellent shot. So they believed Ashley to be that person and it was up to Gregorio to gather whatever information she could.

Gregorio went through Ashley’s things when the ladies weren’t looking and she found a key card for a motel. The team went there and they missed Manning by minutes, but they got their hands on the cash and that ensured Manning couldn’t leave town. He would have to hit another bank and so he would have to go back to Ashley. Ashley did nothing with her best friends Katie and Michelle. Michelle used to a teller at the bank that got hit when she quit after her husband died and so she could have been the inside man that. And if she was involved then Katie had to be in it as well, so Gregorio needed a way to ingratiate herself with the group.

NCIS pretended that they were going to arrest Ashley and they did this out in the open at a café. The same café that Gregorio just happened to be and so Gregorio or Tammy as her friends called her had stood up for Ashley. She got in NCIS’s face and told them one move against a Navy wife and all of them would come after NCIS. So they left without arresting Ashley and she had been so grateful that she told Gregorio everything. She said that Manning escaped prison and had come looking for her. Ashely hadn’t wanted to help him, but he threatened her husband and child. She agreed to help him get his hands on the money and she got her friends involved because they wanted to be there to keep her safe from Manning.

It was never about lost love. Manning threatened Ashley before and he snuck into her house to threaten her again. He wanted to rob another bank and this time Michelle wasn’t going to go through with it, but Manning shot her and he decided to use the other person in the room to fill in for Michelle. He kidnapped Ashley and Gregorio and he made them go through with a new heist. But Gregorio stopped him from killing anyone and she also eventually got Ashley away from him. He was killed trying to run and so the threat was forever gone from Ashley’s life. And with Gregorio vouching for her, she won’t have to go to prison for the robberies.

Gregorio had come to like Ashley and her friends. She didn’t have many friends of her own since Percy left and she tended to take those that stayed for granted, but Gregorio came to appreciate Sebastian and she took him up on his offer to move in with him now that she needed to find a new place to live.