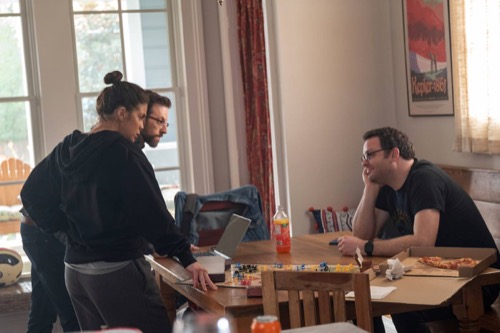 Tonight on CBS NCIS: New Orleans returns with an all-new Tuesday, February 19, 2019, season 5 episode 14 called, “Conspiracy Theories,” and we have your NCIS: New Orleans recap below. On tonight’s NCIS: New Orleans episode as per the CBS synopsis, “Pride and the team reunite with conspiracy journalist Oliver Crane after the source for his latest story is murdered; Hannah’s former partner, Liam Somers, surprises her and shares a shocking revelation about an old case.”

Pride handpicked the latest case. He had been informed that the blogger Oliver Crane had been carrying out a live podcast when the man had been shot and fell into the Mississippi River. It was believed that Crane had been murdered. He had gone to meet ADA Lydia Davenport and someone started shooting at them before either knew what was happening. The Assistant District Attorney was killed first and then the journalist. This crime which while a double homicide would normally be handled by NOPD, but Pride wanted to take this case on himself because he knew Crane and had owed him one.

The first thing Pride wanted to do was find out what Crane was investigating. He went to the man’s office with Special Agent Khoury and their Pride noticed something off. The whole place had been empty and it had also been ransacked. Someone was clearly trying to get to Crane’s research, but there was also something else that Pride couldn’t wrap his head around. He wondered what happened to all the people. He remembered the office of BreakingNOLA.com being full. There had been tons when he was last there and so he was surprised to find the place while Khoury was not. She found bills and it seems that Crane had been heavily in debt when he died. There was even a layer of dust on everything that indicated he had to let more than just people go.

Crane’s business was on its last legs when he found his big scoop. No one knew what it was until Pride and Khoury found his flash drive. It had been hidden in a journalism award that Crane never received and it had some interesting data on it. Crane had apparently left a video to be opened on his death. He said that he was covering a story about conspiracy and murder in NOPD. He didn’t really get into too much detail, but someone had tried accessing his cloud account and Patton traced it back to a public library that was closed. It turns out Crane had survived falling into the river because he jumped. He realized someone was trying to shoot at him and so he faked falling in to throw off the killer.

With the real-life Crane there to answer questions, the team asked him about his story and what it was on. It was about a pattern that he found. He found out that a defense attorney was killed over a year ago and that the man accused of killing him had been released only to be later found murdered in the same exact way. Crane said he found several cases just like that when accused killers were murdered the same way as their alleged victims and that Davenport had information on it. She had been dating the first victim and she had also been in contact with the police in Baton Rouge where they’ve had the same pattern. There was a vigilante who was going around and killing people that have been accused of murder.

Crane initially thought the killer was a cop because he tried going to the local police and got nowhere with them, but the team wasn’t so sure. They wanted more time to investigate the crimes themselves and they also wanted Crane to keep his head down. He went home with Sebastian and Gregorio where he was supposed to hide out. He actually worked with Sebastian to identify how the killer was choosing his victims. The victims were all on the Murder Index. The Murder Index was a website that used an algorithm to who committed what crime. It was run by a man named Steve Bertos. Bertos’s sister was murdered and the police let a suspect go without charging him. The same man that allegedly killed Bertos’s sister went on to die just like her.

Bertos had been a suspect at the time, but it had an airtight alibi and so Crane asked what if it was like “Strangers on a Train”. What if Bertos had someone else kill the man he blamed for his sister’s death and he killed someone for this guy. It seemed like a farfetched theory until the guys found out Bertos goes to a support group called Victims United. The VU believe that the system failed them and so what if they were all trading murders? The group was led by former law enforcement and Pride approached James Farrington believing that Farrington wouldn’t want to impede their case. Except the man refuses to name his members and demanded that NCIS get a warrant before he helped them with anything.

The team began believing they were on to something after that and that’s why they took a risks. They said they suspected one of the accused murderers was innocent when he had been killed. It was true what they said because they determined that one of the men didn’t have the arm strength to stab someone repeatedly to death and so letting the group know this had them all panicking. Especially Bertos. He didn’t want to believe his algorithm made a mistake and so the team sat on him to see what he would do next. He waited but he went back to his office with an unidentified man and tried to access the Murder Index. The team tried to arrest him and had to shoot when Bertos’s partner proved to be a threat.

Bertos was shot and was sent to the hospital, but his partner got away and so the team decided to stop playing around with Farrington. The man was brought in and he was questioned about his group. He hadn’t wanted to say anything at first only he ultimately broke. He said the group hadn’t been responsible. Farrington said it had just been one guy named Guy Dewalt. Dewalt lost his best friend and he first turned to the group for help with his anger. It didn’t dawn that Dewalt started questioning on police procedure around the same time someone was killing the alleged killers until afterward and by then it had been too late. Farrington said Dewalt needed help and that he couldn’t turn to the police because the system had failed them once before.

But Dewalt was looking for the man that had murdered his best friend and he’s already killed the wrong man so he was going to want to try again. The team went back on the Murder Index and they found out who the site named as the new perpetrator. It was another guy with a long record and unfortunately, he was innocent too. The reason why the algorithm kept getting it so wrong was that the murder date had been wrong and so the team split up. Half went to apprehend the real killer and the other half went to go stop Dewalt. Dewalt had been about to murder someone else when he had been murdered and to get him to stop fighting they had shown video from Crane’s website where the man that murdered his friend was finally arrested for the crime.

NCIS had helped the police find credible evidence and so justice did come, but it came too late to save Dewalt from himself.

The team later had a hard time getting Crane out of their office because he now wants to become a consultant for them and so everyone got to laugh about it. The only person that hadn’t been there was Khoury. An old friend of hers came to town with no forewarning and wanting to drink himself in oblivion. Khoury tried to help and resisted it. He quickly left town when she wasn’t looking and he claims that he found some work in the CIA, but Khoury doubts it and just thinks he left because he didn’t like what she had to say.