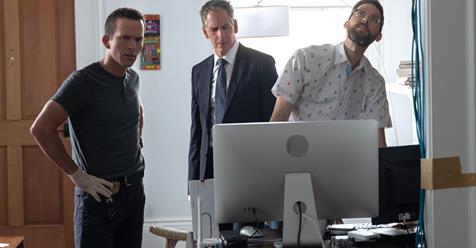 Pride was on his way out of town when the team received a new case. They learned that Navy Recruiter Tyrone Gibson was murdered outside of a club. It wasn’t a robbery because twelve thousand was found on him and he came by that money legitimately. He won a hundred thousand dollars in the lottery and he took all of his friends out because he wanted to share the wealth. He was partying up it with his boys when a woman asked to speak to him and he was lured outside. This was the last time he was seen alive and so the team naturally suspected the woman of murdering him. They used footage of the nightclub to trace it back to Wendy Cotts. She was a college dropout turned hacker and she was arrested for pulling cons.

Wendy was also able to escape jail time by enrolling in at-risk program. This program was supposed to help her and instead, it brought her into contact with Gibson. He taught the program and it didn’t look like had had any kind of personal relationship with Wendy, but then he won the lottery and she just kept calling. She demanded to meet with him and when that didn’t work she confronted him at the nightclub. It wasn’t surprising that Gibson was found dead moments later and so the team went looking for Wendy. She disappeared after the nightclub and the team didn’t know how to find her when the answer fell into their laps. They were hacked. They followed the signal to the car outside and that’s where they found Elvis Bertrand.

It seems their old friend had hacked them because he didn’t want them finding Wendy. The team demanded that the answer for himself and he did. Elvis said he couldn’t let them find Wendy because she was his daughter. She wasn’t his daughter in the traditional sense, but he was sort of her father because he was a sperm donor and that created Wendy. Wendy didn’t grow up with him and she came to hate his sense of “parenting” which really was just him hacking her. She actually doesn’t consider him her father and she doesn’t like his involvement in her life. Wendy also had no idea that Elvis had become involved in the case or that he annoyed the team into bringing him along as they investigated Wendy for Gibson’s murder.

Elvis was sure Gibson was innocent and they couldn’t find evidence that would prove that one way or another, but they did find Wendy. She was using her girlfriend’s place and so the team went there looking for her. Only she was already gone. Wendy had cleared out and she had left behind a program running. This program was a hacking system for the lottery. Wendy had somehow figured out how to hack the lottery and she had helped Gibson gets the hands on the winning ticket. The team couldn’t understand why she had did so and luckily for them, they soon found Wendy again. She was using her girlfriend’s gaming den and they tried to bring her in peacefully. And she had used a program on her computer to cause a blackout that allowed her to escape.

Before she had gotten away, Wendy had dropped a gun. It turns out it was the murder weapon used on Gibson and so they thought that was it. That Wendy definitively killed Gibson. They knew that she would try cashing in another lottery ticket and so they waited for her outside the only lottery place in the city though she never showed. It had actually been her girlfriend that they ended up catching and Bobbi had a lot to say. She said that rigging the lottery had been Wendy’s idea. Wendy thought that the whole thing was a scam on the poor and that’s why she wanted to make sure that the people who were winning deserved it. Wendy gave Tyrone a ticket and Bobbi a ticket. It was Bobbi that made the mistake of telling Wendy’s secret to a man like Ace Rogers.

Rogers was a loan shark she got in deep with and she told him about Wendy’s algorithm because she wanted him to know that she was good for the money. Rogers, however, didn’t want just one payday if he could have several and so he went looking for Wendy when Wendy turned to Gibson for help. Gibson had fought with Rogers over the gun and it went off killing Gibson. In the confusion, Wendy grabbed the gun and she ran. She didn’t want Rogers to kill her and she thought holding the evidence of a crime could protect her. Which it did only it didn’t protect Bobbi. Bobbi’s life was threatened and Wendy was so scared that Rogers would kill another friend of hers that she went to him. He was at his bar when Wendy approached him and offered to get millions in the next lottery jackpot if it buys her freedom from him.

The team had been outside listening in because they were looking for evidence of Gibson’s murder and so Wendy coming by had caught them by surprise. They initially believed that she had been desperate to go looking for Rogers and it wasn’t until late that they realized what she was really doing. She was trying to get him to confess on tape to murdering Gibson and it would have worked, but then her father came in and ruined the whole plan. Elvis thought his daughter was in danger and so he told Rogers that the algorithm had been his. He said that his daughter borrowed it without permission and that only he could help Rogers rig the next lottery pickings. Elvis just kept talking until NCIS busted onto the scene and that’s when they got involved in a gunfight.

Rogers’s people shot at NCIS and NCIS had to shoot back. The team ended up killing and/or arresting most of his henchman and so it was just Rogers that got away. He escaped with Wendy’s laptop and took Elvis hostage. Elvis was needed to help rig the lottery in his favor and so the team knew that Rogers wouldn’t kill their friend, but they also knew that he didn’t have readily available henchmen to go collect the money. He needed someone else and the team determined that he would use someone who owes him. The guy he found owns a sugar mill and was in deep with Rogers. Rogers uses that to hide Elvis at the mill and they stayed there until he learned he had won the lottery.

That’s when Rogers sent his guy out to collect the money and he would have killed Elvis, but Elvis got away. He led Rogers on a chase through the mill and NCIS soon showed up. Pride went after the guys and he had been forced to kill Rogers. Thankfully, Elvis had been okay and he also erased all the evidence of the hack on Wendy’s computer. She now wasn’t facing prison time and Elvis tried to use that to get closer to her.

Only Wendy was more upset that she lost her entire life’s work and when she wasn’t yelling at her dad for what he did – they were both being confronted by Sebastian who asked them to delete their individual back doors in the NCIS mainframe.

Pride was finally able to get on his plane after that and so he wasn’t going to be late for Laurel first-ever solo recital.