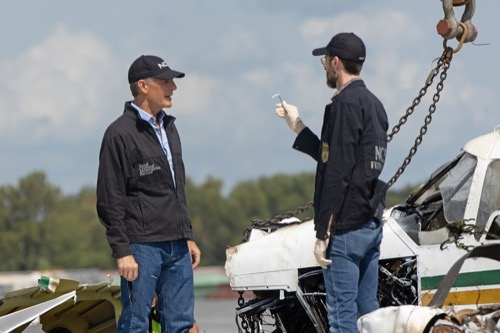 Also, Pride suffers from insomnia and nightmares as a result of being kidnapped and drugged last year.”

Pride has been having nightmares. His mind was all over the place and it was particularly bad when he tried to sleep. Sometimes he would even sleepwalk. Pride would go asleep in his home and they suddenly wake up somewhere else. Pride should have told someone about these nightmares when they began happening, but he kept themselves. He didn’t want anyone to know and he kept everyone from suspecting something was wrong by bringing them a new case. It seems a Naval Lieutenant was changed after witnessing a civilian aircraft crash into the Gulf.

Lieutenant Ella Meyer believes she witnessed alien activity. She says she saw a black cloud attack this aircraft and bring it down. She was laughed at when she brought this to her superiors, but what she saw was undeniably different. She saw something take down that aircraft. Her bosses what to write off the accident by claiming Meyer was crazy and she wasn’t. She worked hard to gain her possession. She didn’t want to lose it all over this one accident and so she turned to the right people when she asked Khoury and Gregorio for help.

The women know what it’s like to fight for your possession. Khoury was recently demoted over a move that would have gotten a man promoted in her place and so she knew what it’s like to be disheartened. She, therefore, didn’t want to be just another person to dump on Meyer. Khoury wanted to help the pilot and she has a great backup in the form of Gregorio. Gregorio was a great friend. She more upset about the demotion than Khoury was and both women knew that Meyer couldn’t be lying.

No one woman would jeopardize her position over “aliens”. There was something that attacked the aircraft and Sebastian believed he might have been high tech gear. Sebastian would have been the first to believe in aliens. The fact he couldn’t get on board this time was enough to write it off and so there were no aliens. There was however sabotage. NCIS suspected someone purposely targeted the pilot of this aircraft and they investigated the man as well as the company behind the flight. The team was looking into this while Pride finally came clean with someone.

Pride talked to Dr. Wade. His old friend immediately picked up on his weird energy and she questioned him until she got results. She got Pride to tell her about his nightmares. He also mentioned how he hasn’t gotten a good night’s sleep in a long time, so she recommended a neurologist she wanted him to see and she thought her doctor’s friend could help him. Pride was exposed to a toxin when he was kidnapped by Apollyon and no one ever found out what the effects were.

Though it turns out Pride wasn’t the only one that could have been poisoned. There was a piece of a drone found in the victim’s throat and that helped the team form a theory. They suspected someone used a bunch of drones to take down that aircraft. They also cleared Meyer of any wrongdoing while they were at it. It seems she was thrown by what she saw because this attack on the victim was something new called the “swarm”. It’s when drones begin acting like bees in the way they attack their victims.

This “swarm” was also very pricey. This piece of latest technology was already being hyped online and it’s gain foreign interest. Gregorio and Sebastian had followed that interest. They were taken to a warehouse and neither of them chose to call backup before they went in, but they came to quickly regret that decision when they were attacked by the “swarm”. They got off very lucky when they both came out okay. And seeing that knowledge firsthand had helped.

The victim of this aircraft attack was Andrew Pruitt. Pruitt worked and owned a company called Paradiso with his wife, but his stepson came to work for him, and they didn’t get along. This stepson then tried to enrich himself with new technology. He got his hands on the “swarm” and he used it to kill his stepfather. Afterward, he tried to sell the technology on its own and that’s when NCIS came in. They stopped the buyout from happening. And arrested everyone that was involved.

It was a great ending to the case and yet it didn’t solve the problems going on with their lives. Pride was suffering from hallucinations, Khoury was dealing with her demotion, and LaSalle was trying to track down his brother. The brother might have gone off his meds, so it was imperative that LaSalle found him in time.

And just when the team lets their guard down, another federal agency swoops in and takes their case from them.