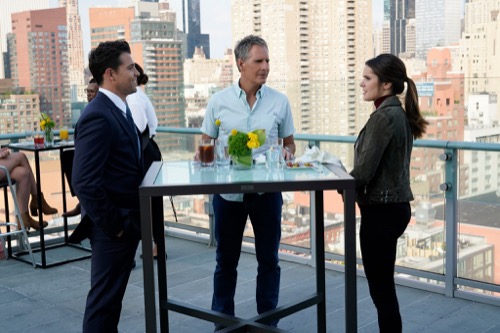 Pride saw Dr. Wade’s friend. He thought a neurologist would help him or at least find out what was wrong with him and unfortunately all of his scans came back clean. There was nothing wrong with him. Pride was having very realistic nightmares and it made him afraid to close his eyes at night, but there was still nothing medically wrong with him. He was in peak condition. He just had to make do with the nightmares. He tended to see people from his old cases when he dreams and, as luck would have it, he also ended up working an old case.

Pride found out an old case of his had become active again. He once worked the murder of Ashley Griffin. She was a teenager that went missing and her body was found a few days later. She was found next to the baseball bat that was used to kill her. It had been a bad scene all around. Pride can recall it from memory and its why he was eager to find out why this case had been reopened. It seems the chief suspect of Ashley’s murder had been found with “trophies”. Elliott Whitman’s neighbor had a small fire and the fire department had to go through his apartment to get to the fire. And that’s when they found a box hidden in an air vent.

This box had Ashley’s underwear in it. Her DNA was still on it and so the local police called up Pride because he had been on the case. Pride had been working with the Sheriff department at the time. The Sheriff had been a little overzealous with Whitman and Pride regretted leaving him alone with the suspect. By the time he had come back, he had had to pry the sheriff off of Whitman. Whitman’s family threatened to sue after that and that spooked the DA. They decided to let Whitman because they were afraid of being sued. And now it looks like the Sheriff was right all along about Whitman.

Whitman was the chief suspect because of his attitude at the time. He had smug when talking to the police and he knew that their case was flimsy. The only evidence they had was an eyewitness who saw Whitman follow Ashley on the day she disappeared. Which could have meant anything. So, Whitman got to walk and now he’s been found with a box. The box held a number of items. One of them was Ashley’s underwear like it was said before and the other three seemed like they might have belonged to other victims.

It doesn’t appear that Whitman stopped with Ashley. He may have gone on to kill other women and there was evidence of shadiness. He did move around a lot. He also likes to take “vacations” every couple of weeks and that was when he wasn’t bothering his neighbor’s daughter. Whitman practically checked all the boxes for a serial. This leery loner had even been found with four items that might as well belong to victims and so Pride tried talking to him. Whitman took one look at Pride and freaked out.

Memories of what happened at the Sheriff’s office were apparently still raw for him. He screamed until Pride left the room and that infuriated the local cops. Detective David Cabrera was Pride’s partner on this one. He didn’t want Pride anywhere near this case because he felt Pride had already messed it up before, Pride had rank and a pretty daughter. Both of which helped bring David around. He and Pride worked together to find other victims matching Ashley’s MO and they found three that fit Whitman perfectly. And others that happened when he had an alibi.

How could Whitman have killed all of them if he had an alibi for some of them? There was also the keepsake box to take in and so at most they could trace Whitman to four murders. The other murders however were committed by someone else. Like a partner. The team looked into Whitman’s past and the only friend ever made was back in high school. Parker Lacey was an older student that was mentoring Whitman. They even stayed in contact after Lacey graduated and so he was literally the only person that could be committing these murders with Whitman.

The team even found out why they were doing this. It seems all the women that Lacey murdered were somehow connected to someone that’s wronged Whitman and all the women that Whitman had probably been the same case with Lacey. But Lacey was missing. His wife said he was on a business trip and no one could get into contact with him. Lacey did his disappearing act at the same time that Whitman’s neighbor’s daughter disappeared. Her mom was sort of responsible for Whitman’s arrest and so it seemed like Whitman wanted to punish her for it. And the only way he knows how it to hurt someone she loves.

Lacey also works in the energy department. He can use the underground tunnels to his hearts content and so Pride and his partner did his best to flush him out. They dug up what Lacey had been looking into and used that to pinpoint his exact location. The duo found Lacey, but he made a run for it and had gotten as far as outside when he was hit by a vehicle. Lacey was killed quickly. He never got a chance to say anything to Pride and therefore Pride had nothing to use against Whitman.

So, Pride used the cards he had. He withheld the part about Lacey being dead and he pretended that Lacey had even flipped on Whitman. Lacy had everything to live for. He had a wife, kids, and a steady job. Pride claimed that Lacey told him that Whitman had threatened to harm his family if he didn’t participate in the murders. And Pride had worked up Whitman so much that Whitman confessed to everything.

He even mentioned what he and Lacey did to Ashley because they hated her father who was a dean at their school.

Pride had finally been able to close this case, but his partner seems to be sticking around because he was interested in Pride’s daughter Laurel.

And to make things worse, LaSalle needed to take some time off because he was still looking for his brother.