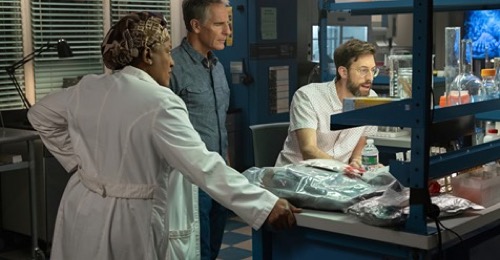 It was unorthodox for the Medical Examiner to give a forensic report to a family member. Dr. Wade didn’t like to share the information because she knew it could be gruesome and didn’t she want to inflict any more pain on the victim’s loved ones. It’s a policy for her and she tried to tell LaSalle as much. She counts him as a friend and knew that the report would just hurt him, but he demanded the truth anyway.

LaSalle wanted to know what happened to his brother. His brother Cade went off the grid a while back and he went looking for him. He thought he would just find Cade off his meds. He never believed he’d find his brother’s grave or that he would be in the position to investigate the murder, but Pride afforded him this chance. Pride knew LaSalle needed this. LaSalle needed answers more than anything and it was because Wade broke protocol.

Wade told him everything from the report. She said that Cade had been murdered by an expert and that he most likely felt nothing. This was at least some comfort for LaSalle. He still broke down in tears however because he blames himself for his brother’s murder. He thought he should have been there and that he could have stopped it if he had. He also wondered why his brother never turned to him for help.

LaSalle was a federal agent and he had plenty of resources. He could have easily have gotten his brother out of the trouble and still Cade never turned to him. Cade went off on his own because the situation had been personal for him. His girlfriend’s son had found himself in trouble with the drug trade when he promised to make a drop and never did. Cade had promised the teenager that he would handle it and that’s what led to his death.

LaSalle had his team pump the information out of the teenager. While he went and followed his brother’s last movements. LaSalle had needed for this part so Pride went with him. The two of them began interrogating people the teen was hanging out with and it was slowly leading them on the trail to their killer. They thought their friends would also be there to help, but the job got in the way. The rest of the team was called upon to investigate a possible spy.

Navy Lieutenant Max Landry came to the team because he thought his girlfriend was spying on him. He came to this conclusion when he decided to propose to her and tried to find out what she likes, but instead found several highly classified emails on her computer. She didn’t have the clearance for such things while he did. Max was working on a superconductor for the military. He was supposed to review it and that’s why he had the semantics. And it’s also why he kept them close to himself.

Max was never careless with the information he received. He knew there was no way his girlfriend Rina could have accidentally accessed those files and so odds are she stole them from him. Max didn’t want to believe the worst of his girlfriend, but he had his suspicions and he couldn’t go into his mandatory lie detector test with them else his bosses would’ve demand answers he couldn’t give them.

Max asked the team for help. They were skeptical at first, but then they did some digging and they found gold. They found evidence that Rina was a spy. She was approached by a man on a humanitarian mission and he said all the right things. He even convinced her that companies were making a profit off the backs of the poor. Which was technically true. This guy used just the right amount of pressure and radicalization to get Rina to commit a crime.

The guy that approached her was a Russian asset. He got around to telling her what he was when it came time to blackmail her. The Russians have been blackmailing Rina into being their spy for them and everything was going great until Rina met Max. Max was the game-changer. He was all Rina thought about and so the team used him to get Rina to give up everything she knew. She told them all about the Russians. She also mentioned how she started sharing false information after she met Max.

Max’s superconductor was never in danger. Rina would steal the files from him and then doctored them before handing them off to the Russians. The Russians eventually caught on to the plot, but by then, Rina was in NCIS custody. She had seemingly disappeared and so the Russians abducted Max. They held him prisoner as a means of getting Rina to pass on the correct information. And so Rina and thereby Max received help from NCIS.

NCIS watched over Rina as she handed over even more false files. Only this time she did it to get Max back and NCIS ensured there wouldn’t be any further repercussions from the Russians. The team had protected them and they were also there when Max proposed to Rina. He still loved her after all of this. He now has his future with her thanks to NCIS and so the team walked away with one happy ending.

The same couldn’t be said of LaSalle. LaSalle and Pride had found evidence that the drugs that were being trafficked were synthetic opioids. They were originally created in a lab because someone wanted to make the drugs less addictive. The doctor that created this opioid ended up creating something entirely different. She created an even more powerful drug that was killing people all over the south and so someone making an illegal profit out of her work. But the drug dealers would have had some contact with the lab itself.

The doctor had mentioned a disgruntled employee that was recently fired. She thought the guy could have stolen her formula and so the guys tracked him down. They received help from local law enforcement, but that proved to be a problem when their suspect was killed before he could be apprehended. The guy was dead and so the trail should have been cold, except LaSalle and Pride didn’t believe their dead dude was their killer.

The guy didn’t have the means to set up a lab of his own. He may have passed on the formula, but that seems to be it as far as his involvement went and so the guys were going to go find their real perp when someone showed up confessing to Cade’s murder at the local police station.

The man with the confession had clearly been coached, but the District Attorney didn’t want to hear it and so Cade’s case was going to be officially closed despite both LaSalle and Pride knowing that the real killer was still out there.