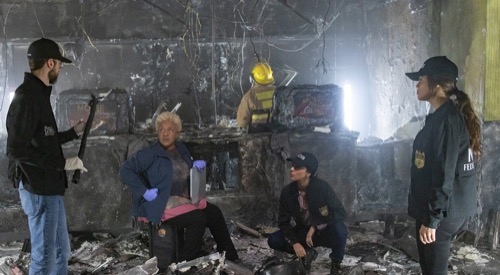 An explosion occurred at the movie theater. The team was assigned the case because a sailor died in the accident and so they went there to investigate what happened. The team was first told that it seemed like a natural gas explosion. Sebastian, however, found evidence contradiction the preliminary reports because he said the pipes weren’t corroded and that if anything the gas company has safeguards in place which would have prevented the accident. The only way the building would have exploded as it did was if those safeguards were manually removed. Sebastian believed the building was targeted and that there was a bomber out there.

The team was then forced to notify the mayor. Mayor Taylor was a friend of Pride’s and so he personally went to see her with Gregorio as his backup. The two of them had wanted to inform of what they found. They were just beginning to go into detail when the bomber called the mayor. He shrouded his voice so that no one would recognize him and he fully confessed to bombing the movie theater. He even told how he did it by rerouting the gas company’s low-pressure system. Gregorio had tested him on everything he said and she tried to get a feel of him. She was still a profiler after all.

Gregorio thought if she pushed the bomber that he would reveal key details. Like what his endgame and why was he was threatening the Mayor of all people. Gregorio wanted insight into the man that called himself Spartacus. She even pushed him into revealing his flaws. He revealed that he wanted five million dollars and then he hung up before the phone call could be traced. Spartacus thought he was smart. He didn’t know that Gregorio saw him for what he was and realized that he was methodical enough not to be easily caught. It’s why when they found a clue that led to someone who works for the gas company – Gregorio saw it for the false flag it was.

The guy they found had nothing to do with the bombing. He wasn’t Spartacus and Spartacus proved that when he later called the Mayor again. Gregorio answered the phone at that time as well. She convinced Spartacus to take half a million dollars as a sign of good faith and she promised to raise the rest of the money. Then, when she was off the phone with him, Gregorio told the Mayor and Pride what she thought. She told them that Spartacus called the moment they received a confirmation on the false flag and so he must have been watching them. Gregorio doesn’t know he’s doing it.

He could have hacked their phones or even planted cameras. Gregorio wasn’t sure and she wanted them all to be wary. The three of them secretly brought in people to clear the room. Gregorio later blamed herself for not seeing it sooner and so Pride talked to her about it. He told her that she was grieving. Sebastian and Gregorio had been going through LaSalle’s files earlier. They wanted to put everything to rest and it helped them work through their grief even if it only dented some of their pain. They were still missing their friend. Gregorio was probably always going to miss LaSalle and so she forced herself into pushing her pain aside.

Gregorio focused on the case. She answered the phone again when Spartacus called and she tried to stall him as long as possible. The team needed twelve hours before they could shut down all the gas in the city. Gregorio just needed to stall until then. She gave him the sign of good faith and she even tried to get him to use her first name as a way of connecting to him. But it didn’t work on Spartacus. He was a narcissist that wanted to blame the world for not recognizing his genius and so the last thing he told Gregorio was that she got what’s coming to her. She quickly realized that he was going to bomb another location from that. She and the rest of her team also monitored the gas leak to see where it was building up and they found out he was targeting the 911 call center.

The team diverted the calls that go there. They were also evacuating the building and were on their last person when the building exploded in the background. Khoury and Sebastian walked away from it with some minor scrapes. It was nothing serious and still, Wade had panicked. She just lost someone she cared about. She didn’t want to lose anyone else and so Sebastian promised her he would be more careful going forward. And the rest of the team were all thinking about how close they could come to be the next victim, it scared Khoury because she was thinking about her daughter and at the same time they couldn’t afford to let fears get in their way.

Not when they were hunting a bomber. The team came up with a plan on how to deal with him and they were going to promise to give him some of the money all the while they were stalling. They had heard from the mayor that she privatized several departments in New Orleans. She said it was a way to save money. She also admitted that several people in the department were being let go. So, Patton decided to investigate everyone that would be losing their jobs. He quickly came across Steven Marx and Marx was raising the gas pressure in another building. This time he didn’t want Gregorio.

Marx didn’t tell her anything because the building he wanted to bomb next was City Hall. That’s where Gregorio was and its where most of her team were situated. It turns out Marx didn’t care about the money anymore. He now just wanted revenge and that’s why he was targeting City Hall. Marx was even nearby to watch the damage. The team went looking for him as they were evacuating the building and he started to let things slip while he was on the phone with Gregorio. He saw that she was stalling him as she was clearing the building. He said he saw Taylor’s car leaving and that helped pinpoint his location.

Pride ended up finding Marx. He told him to lower the cell phone and Marx refused to. He pushed the button to raise the gas pressure at City Hall, but Pride shot and killed him before the bombing could happen. And so Sebastian had enough time to reverse what Marx did.

The team saved City Hall and stopped a serial bomber. They also did so at almost the cost of their own lives and so everyone needed a drink afterward.

Pride and Wade sat the pre-drinks out and they instead went to LaSalle’s church where they went looking for guidance.