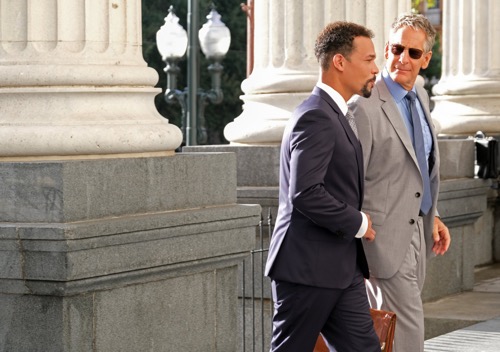 Tonight on CBS NCIS: New Orleans returns with an all-new Tuesday, January 15, 2019, season 5 episode 11 Winter Premiere called, “Vindicta,” and we have your NCIS: New Orleans recap below. On tonight’s NCIS: New Orleans episode as per the CBS synopsis, “Pride and the NCIS team hope to take down a secret and lethal group of former intelligence agents and avenge the death of someone close to them.”

The brains behind Apollyon were the ones to blame for Cassius’s death. Cassius died protecting his son and his son promised to avenge him, but first, he had to tell his brother what happened. Pride went to Jimmy and he told him that their father was dead. He also told him how Cassius died and so he never suspected that Jimmy would blame him. Pride already blames himself and he’s been thinking the moment over in his mind because he feels like he could have done something. He just never expected that Jimmy would feel the same. Jimmy said that he’s been around Pride long enough to know that people drop dead after his older brother and so, of course, that’s how their father died.

But Jimmy didn’t really mean it. He was grieving and he was angry about his father died but he knows that Pride wasn’t to blame and so he only said all of that because it was easier to direct his anger at someone he knows could take it. Pride wasn’t even upset. He got where Jimmy was coming from and that’s why he set his team to investigate Apollyon. The situation with Apollyon had officially been handed over to the CIA and so the team had to go about their investigation secretly because they didn’t want to risk sharing what they had just to be shut again. And so Pride only told his team that Amelia revealed she had a barcode tattooed on her stomach that lists names and details about Apollyon.

The team had access to her body and so they made sure to run the barcode. Only the barcode wasn’t a list per se. It was more photos that Amelia had taken with no one being aware and it turns out that the team recognized someone. They saw Walker. Walker was now in prison because of them and so they knew how to find him without alerting anyone. They also took the photos with them because they knew that Walker would lie and he tried to. He tried to claim he had no knowledge of Apollyon and then he stopped his little charade when he was shown the photos. The photos made Walker because he said that he should be known that Amelia was crafty, but the team took the risk of telling Walker what happened and that worried Walker.

Walker said that once the outer-ring of Apollyon was infiltrated that the bosses would go “scorch earth” to protect themselves. He believed that Apollyon would kill anyone that had real information on them and so he agreed to tell NCIS everything he knows, but he wanted to be moved into protected custody and the team was willing to make that deal. They got names and aliases out of it and so it was a fair trade. The team later went looking for these people and two of the three that they found had been killed. There was one death in Moscow and another dead in Tel-Aviv. The only one that was still alive was “Matias” and he was in Texas working as a mechanic as part of his cover. And so Agents Khoury and LaSalle went to go Texas.

They arrived and informed the local police department that they were apprehending a hitman, but once they got to Matias, a sniper began taking shots at them and one of them killed the team’s last link to Apollyon. The team had no other leads to follow and so Khoury decided to take a risk. She went to her ex-husband Professor Ryan Porter and she asked him to use his contacts at the NSA to get them a meeting. The meeting was with Ms. Cooper and she took Pride into an NSA outpost where he could meet analysists who have been monitoring the recent events. It seems that kidnapping hadn’t been the only thing that Apollyon was into. They also took contracts from the highest bidder to manipulate stock markets, governments, and they weren’t done.

The NSA had their own files that they had gotten from Apollyon and they shared them with Pride, but most of it was in code and so the only thing that either Sebastian or Patton could figure out was that there was someone nicknamed the “Eagle” who had been involved with every single one of the missions. The guys tried to find this Eagle because they thought he was the boss and so why did their investigation lead them to Walker. Walker was later confronted by Pride who accused him of planning everything and Walker denied it. He said that Apollyon was pushing out misinformation in order to create chaos and confusion. Walker also said that he knew more about Apollyon than he first told Pride and so he wanted a better deal if he was going to talk.

No sooner had Walker said all of this that there was a massive riot in the prison and so Walker had to be moved, but Pride tried to go with him and unfortunately, they got split up in the chaos. Walker got dragged away and he wasn’t seen again. But Sebastian rechecked his information and he realized that Walker had been telling the truth. It was too suspicious that the only file they could decrypt led to Walker and so Sebastian checked to see if the information had been changed recently. It had and while the original was lost it didn’t mean that the team learned something. They learned that someone changed a protected NSA file and that could only mean Apollyon had someone at the NSA.

The team checked on their contact Nancy Cooper and they found her dead. Afterward, Khoury went over to her ex-husband’s and she told him how they had to move him as well as their daughter. The agent blamed herself for uprooting their lives again but Ryan helped them figure out the boss was an NSA agent and the team later got into contact with their friends at the NSA that verified that there was only one analyst that was missing since they moved office. It happened to be a man named Phillip Sinclair and he was the analyst in charge of investigating Apollyon. And so now everyone knows why they’ve been able to get close enough to Apollyon to find out any relevant information.

Except Sinclair wanted Pride to find him and so he left behind some clues. He gave Pride enough hints that Pride tracked Sinclair back to a horse farm. Sinclair could have run if he wanted to, but he stayed because he said that there wasn’t a point now that his name was out there. He’ll be hunted wherever he goes and so he decided to kill himself. He whispered a saying or prayer that Pride had heard once before. It had been said by the Angel of Death when his father was dying.

And it had been the last time that Pride had seen or spoken to the angel. but she was still around.