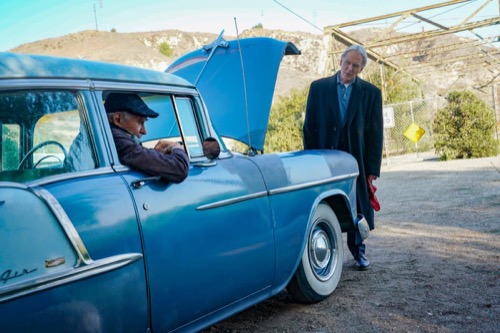 Tonight on CBS NCIS returns with an all-new Tuesday, January 15, 2019, season 16 episode 12 called, “The Last Link” and we have your weekly NCIS recap below. On tonight’s NCIS season 16 episode 12, “The Last Link,” as per the CBS synopsis, “An old family friend beseeches Gibbs to join him on a road trip to search for a missing military I.D. bracelet. Also, a Navy Lieutenant in NCIS protective custody is poisoned by an infamous drug dealer.”

An old friend came to see Gibbs. Gibbs was in the middle of an investigation and didn’t have time for distractions. Which was probably why he was short with Corporal John Sydney. Sydney had been a friend of Gibbs’s father and he came to see Gibbs because another old friend had passed away. The deceased was Leeroy Jethro Moore and Gibbs was named after him, but he didn’t need Sydney to tell him the news because he had already heard it from Moore’s son. Gibbs also didn’t feel the need to thank Sydney for making the trip and instead he chose to shuffle the older man quickly out of the building.

Gibbs didn’t really have fond memories of Sydney and so he had been happy to see the back of him. But then his case took an odd turn. Gibbs and his team were investigating notorious drug dealer Michael Deegan because Deegan had hired a hitman to kill Lt. Johnson and the hitman failed. “Peaches” missed his target and was arrested for the attempted murder. The team used that to their advantage and they helped stage the murder of Johnson in exchange for getting Peaches to wear a wire. It all supposed to be simple. Peaches were going to go to Deegan and demand the rest of the money for carrying out the job. And that’s how the team was supposed to get Deegan on tape.

Deegan has never been caught with anything else and so getting his admission that he was willing to pay would have been enough to send him to prison for life. All the plan needed to be was Peaches and he agreed to play his part. He put on the wire and he went to the bar to meet with Deegan, but of course, the plan didn’t go as they all hoped it would. Peaches had demanded payment and Deegan claimed to have no knowledge of what Peaches was talking about. Peaches again brought out the doctored photos of a dead Johnson to prove that he did the job he was ordered to do and Deegan denied all knowledge of this “hit”.

Peaches left the bar after that and said that someone Deegan must have found out that he was wearing a wire. He claimed he hadn’t tipped off Deegan and that he had no idea how the other man knew, but Deegan definitely knew. He was aware that Peaches was wearing a wire and so Peaches asked for protection. He said that Deegan would come after him if he wasn’t protected and so the team didn’t know what to do. They had monitored Peaches and he couldn’t have gotten the word out. They also had Johnson under twenty-four surveillance and so they decided to keep the fact that Jonson was alive a secret for a little while longer.

The team had tried to backup Peaches’ story. They went to Deegan as NCIS Agents and questioned Deegan whether or not he hired Peaches to kill Lt. Johnson, but Deegan denied hiring anyone and he didn’t seem to be believing that Johnson was dead. It turns out Deegan knew that Johnson was still alive. Johnson hadn’t left his cell phone behind like he was asked to and someone he was tracked down to his hotel where he was murdered. His food had been poisoned with a harsher byproduct of fentanyl and the substance was actually a lot more dangerous. Everyone that came in contact with the body or even the food had to take an Emergency Shower.

The team had gotten a sketch of what the false deliveryman looked like and they found him in security footage outside of the hotel, but they had to go ahead with their investigation with Gibbs. Gibbs had talked to Sydney again and Sydney said why he really came to see Gibbs. Gibbs’s father, Sydney, and Moore had all served in WWII together. They were part of a larger group from their hometown that went and serves. So Sydney said that it had been twelve of them that came back and now it was just him that was still alive. Sydney said that he made a promise to his friends that the last man standing would collect all of their military ID bracelets. And Sydney needed help.

Sydney got the bracelets from some of the men and he needed the one that Gibbs wore. Gibbs hadn’t been sure if he wanted to hand over the bracelet but he agreed to do it and he said that he helped get the rest of the bracelets as well. He left with Sydney and as they traveled together they got to talking. Gibbs revealed that the reason he didn’t want to Sydney was that he had been upset. He had been upset that Sydney had been part of his life and then disappeared one day. Sydney hadn’t wanted to go and he admitted as much. He said that he had been a heavy drinker and that Gibbs’s mother kicked him because she blamed him for her husband’s drinking.

Both men had been messed up by the war and so Sydney didn’t want help when it was offered but was willing to go with Gibbs’s mother demanded it because the woman was just trying to do what was right by her family. She got Sydney out of the picture and eventually, the family stopped talking about him. Gibbs remembered what it was like to have an uncle one day and for him to disappear into the next without any kind of explanation. But knowing that didn’t go as he thought it did had helped. Gibbs came to forgive his Uncle Sydney for leaving and he helped him to track down the remaining bracelets as his team tried to close their case.

They traced the hitman back to a vending machine. It was a special vending machine that would drop candy containers filled with drugs if someone put three hundred dollars into the machine at once. By the time Gibbs returned, the team had even named the hitman. His name is Oliver Sherry and he agreed to talk for protection. He said that he killed Johnson because there had been a mistake. The machine had malfunctioned when Johnson tried to use it and instead of candy it had given him three hundred dollars. Johnson had felt so bad about it that he called the 800 number on the side of the machine to hand back the money and he had also wanted to know what happened.

Johnson was fed some story that the drug dealer knew wouldn’t hold up and so that’s why they decided to kill him. After Johnson died, it was Sherry’s job to go clean out all of the machines and it led to him being caught. So he didn’t care what happened. He said he wanted protection and it wasn’t from Deegan. Deegan actually works for Peaches and that’s why the sting didn’t work. Peaches were the big boss and he used his cover story to escape an attempted murder charge. And he thought he got away with it but, with Sherry’s testimony, they got him for his drug business as well as for the murder of Lt. Johnson.

And with Peaches and his people behind bars, Gibbs decided he should get to know his Uncle Sydney again.