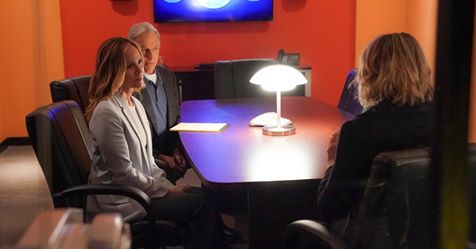 Tonight on CBS NCIS returns with an all-new Tuesday, April 9, 2019, season 16 episode 19 called, “Perennial” and we have your weekly NCIS recap below. On tonight’s NCIS season 16 episode 19, “Perennial,” as per the CBS synopsis, “The team searches for an active shooter following a lockdown at a naval hospital.”

There was an active shooter at the hospital. This means that under normal circumstances it would have been up to local police and later maybe even the FBI to deal with, but this case came to NCIS because it was a naval hospital and needed to be handled in house. The team was in charge of apprehending the shooter. He was identified as being Caucasian and wearing all black. The rest of the descriptions tended to vary according to the many witnesses and so the team focused on what they could. They checked the grounds to see in which direction the shooter fled and they thought that Sloane could help them create a profile. They reached out to her and asked her to help and she turned them down. She said she had to recuse herself from the case and didn’t go much into detail over why.

The team tried to understand, but Gibbs had someone look into everyone that was at the hospital and one name came across that Gibbs instantly knew was connected to Sloane. It was the name, Faith Tolliver. She was Sloane’s biological daughter and she was put up for adoption. She has never met Sloane and Sloane was hoping not to run into her. She just came by the hospital to check if her daughter was the only casualty and she wasn’t. It was actually another woman by the name of Diana Sanchez that died and so Gibbs wasn’t going to intervene or force Sloane to see her daughter if she didn’t have to accept the case soon took a turn. They checked security cameras and the only person that got a good look at the shooter’s face was Faith. Faith saw him right before she went into surgery with a patient and she stayed in the OR until the surgery was over with.

In other words, she was locked away when the shooter went on his rampage and he had no chance of getting to her. So Faith needed to be brought in. It came as a shock to Sloane and she still wanted to distance herself. She told Gibbs that she didn’t want to be in the room when he was questioning Faith but she had so many things she wanted him to remember when he interviews someone that recently went through trauma and so she eventually had to be in the room. Sloane saw Faith and got to shake her hand. She also went easy on her. Perhaps too easy because she was focused more on making Faith comfortable than she was on catching the shooter and so Gibbs found himself playing bad cop to Sloane’s good cop. Sloane told Faith that she didn’t remember when it wasn’t her fault and Gibbs told her to at least try to create a sketch of the shooter because she might remember more over time.

It seems that extra push yielded a good enough sketch that the team had a suspect. They were told the sketched looked like eighteen-year-old Evan Sykes. Sykes lived with his dad and luckily the older man was found alive, but Sykes wasn’t at the house and to make things worse he also restocked his gun before he left. The team found the empty ammunition box and therefore they knew he wasn’t done yet. He was going to shoot up another place and so they checked his laptop. There was just one problem. The laptop has a virus on it and that makes everything he looked or wrote seem like gibberish. Kasie had to attack the virus and see what it’s one it before the team could act. And so it took a while before Kasie uncyphered it to reveal that Sykes had been looking at an elementary school near the hospital.

The team put extra around the school and they brought in Sykes’s father to get a grasp on his mindset. They wanted to know why Sykes was doing all of this, but his father couldn’t help them. He said that he doesn’t know his son anymore and that things changed between them when they lost Christopher. Christopher was the older brother and he had been a marine. He has also had a problem with drinking and driving because he killed a whole family while intoxicated. Christopher was sentenced to years in prison and this had been hard on Sykes. Sykes blames the Marines because he thought that they should have advocated for a lighter sentence in Christopher’s case and so that’s why he was last seen wearing his brother’s uniform. He wanted to blame the world for what happened with Christopher because he refused to admit it was his brother’s own fault.

Christopher ruined his own life and now Sykes has gone and done the same thing, but their father knew nothing and he wasn’t much help. The last part truly frustrated Torres because Torres couldn’t believe the gall of this family. They kept thinking about what happened to Christopher and they didn’t spare a thought to what happened to his victims. Torres lashed out before he knew it and he warned by Gibbs that he needed to calm down. The team had to look on their own for why Sykes was targeting these places and they couldn’t figure it on their own. They tried everything and nothing clicked until they talked to Officer Moseby. Moseby was an off-duty cop when he went to have pancakes with his wife who works at the hospital. The two of them were just enjoying their breakfast when the shooting happened and unfortunately, Mosbey was injured but he was able to return fire.

Moseby shot Sykes in the arm and its what forced the teenager to flee the scene, but the teen didn’t go to the elementary school and so the team figured he was too badly injured when Mosbey came out of surgery and gave evidence. He had never heard of the name Sykes except there was a connection. Sykes had gone to that hospital intending to kill Mosbey. It hadn’t been some random shooting and it was actually a coordinated hit. Mosbey had been the first responder on the scene when Christopher killed that family and because they were all dead it had been left to Mosbey to make an impact statement at Christopher’s trial. Christopher was coming up for probation and Sykes didn’t want Moseby to ruin it for his brother. He followed Mosbey and saw that his best shot at him was either when he was with his kids or his wife and he chose the latter.

Mosbey also didn’t make the connection because Christopher has a different last name. The team was advised by Sloane that if they took what they found to Sykes’s father that the man would give up his son and she had been right. This was truly a family matter and the team had to get them to turn on each other for their own good. The man told them which motel his son was staying in and they found Sykes there, but there was also a moment in which Torres wanted Sykes to grab for his gun because he wanted to kill him and he eventually let it go because he knew to live would be so much worse for him. Sykes hadn’t cared about anyone else besides his brother and he was willing to kill a bunch of random and innocent people if it got him what he wanted. And now both he and his brother will never know freedom again.