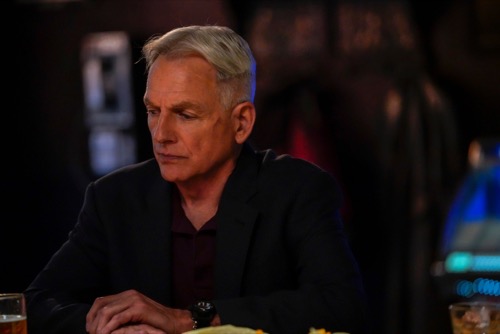 Tonight on CBS NCIS returns with an all-new Tuesday, May 14, 2019, season 16 episode 23 called, “Lost Time,” and we have your weekly NCIS recap below. On tonight’s NCIS season 16 episode 23, “Lost Time,” as per the CBS synopsis, “The team investigates the murder of a Marine Sergeant who was hailed as a war hero for his efforts overseas; Gibbs turns to Dr. Confalone for advice after uncharacteristically abandoning the team at a crime scene.”

The body of Marine Gunnery Sergeant Richard Wilson was tossed off a bridge. He landed on a pike as he came down and that’s what alerted the local homeless couple that lived off the bridge, but the couple knew what to do. They called ‘911’ and the police were actually the ones that identified the body because Wilson didn’t have a wallet or an ID on him. It was only after he was identified as a serviceman that NCIS were called and they had enough problems on their hands. They were still talking about the secret Gibbs had let them in on and both Bishop and McGee were especially troubled by what they heard. They believed in Gibbs and had thought he was a man of principles. To find out that he executed the man responsible for the death of his family wasn’t something that they could put in the back of their minds.

The only one that seemed fine was Torres. Torres said he would have done the same thing in Gibbs’s position and so he didn’t understand why Bishop and McGee were turning it into a thing. They wanted to talk to Gibbs about it and Torres told them that was a bad idea. He said that Gibbs didn’t tell them this secret so that they did something about it and he begged them to forget Gibbs had ever mentioned it at all. It didn’t mean that any of them forget it, but they thought that a new case would occupy Gibbs and it instead made him worse. Gibbs had a problem with hearing about Wilson. Wilson was three months shy of retirement and he was married with no kids. His wife Lori had been out of town and she had just gotten back. She came home to find her house in disarray and couldn’t understand why anyone would break in.

According to Lori, her husband was complicated. He was the strong silent type and he never talked about work because he had seen some things overseas. Wilson didn’t even like to mention the raid five years ago. His squad had taken down a terrorist known as Zakir and he lost his friends on this mission. It was something about hearing Lori’s recollection of events that got to Gibbs and he ran out of her interview. It stunned Torres and also Lori wondered if it was something she said. She also wasn’t the only asking thigs. The more Gibbs heard about Wilson and his complicated life the more he lost his patience with his coworkers. He bit off Kasie’s head when she was trying to give him an update and said that Wilson was in contact with two others in the lead up to his death. And Gibbs hated to hear heroes being killed at home.

Wilson went on countless missions and he was killed right when he was leaving the Marines. It didn’t seem fair to Gibbs and he truly lost it when he heard that Wilson had been talking to the two other survivors from the Zakir raid, but that one of them was now missing as well. Marine Staff Sergeant Jordon McCarthy has disappeared and no one believed he was alive. There had been blood found at his disheveled apartment and so it looked the survivors were being targeted. The team knew they had to reach out to Marine Staff Sergeant John Calfa as he was the sole survivor left and they thought Gibbs would have approved of this plan before he decided to surprise them all. Gibbs ran from the scene and he didn’t come back to the office. He didn’t even make an appearance when they brought Calfa in for questioning.

Gibbs ended up go to a bar where he called his therapist. Dr. Grace Confalone knew that there was a problem the moment she was called out to a bar and there she found a struggling Gibbs. Gibbs said that he trained his team to take responsibility and so what must they think of him now? He knew that he shouldn’t have said anything because he created a rule just for that purpose and now there was no way to take any of it back. Gibbs admitted he was thinking about confessing. He said that he ran from the past long enough and that maybe he should own up to what he did. He killed a man in cold blood. There was justification for this and anyone with his talents would perhaps have done the same but Gibbs knew to kill the man was wrong and he thought he was ready to unburden himself.

His doctor thought differently. Grace was trying to talk him out of it because of it’s not like it will be easy for him and he was an NCIS agent, but while she was dealing with Gibbs’s midlife crisis, the rest of the team was trying to solve this case. They found out the blood at McCarthy’s place belonged to Wilson and so at first they thought one killed the other. It wasn’t until they found McCarthy’s body and saw for themselves that he was an expert that they questioned events. They asked Calfa if there was any reason why his friends would kill each other and he claimed to have no clue. He also went on to say that they weren’t really friends and he again quickly changed his tune when they asked him about his whereabouts. Calfa was hiding something and the team figured out what it was with Ducky’s help.

Ducky checked the archives and he said that there was a discrepancy in the file. Zakir had been taken in alive and he informed the authorities that he had had thirty-three million dollars in Taliban money, but Wilson’s team claimed that they claimed thirty million. There were three million dollars missing and Calfa refused to say where it was. The team asked Lori Wilson before she left if she knew about it and she said she never heard of a rainy day fund. Then again she wasn’t really Lori Wilson. The real woman showed up and she wanted to know what happened to her house because after she saw it in a mess she knew she had been robbed. Lori, the real Lori, checked on the Victorian brooch that she and her husband were hiding and it was done. The brooch was a gift from the king of Spain to Queen Victoria and it was worth two-point-eight million dollars.

The brooch was how the soldiers on the Zakir Raid were able to smuggle out the missing three million. Calfa later confessed to what happened and he said only three soldiers, as well as Lori, knew the truth. He admitted that McCarthy was dating someone recently and that he might also have told her, but he wasn’t sure and so the team looked into it. They had gotten a fingerprint from the fake Lori and that with phone records showed that former FSB spy Inga Petrov had been the one to steal the brooch. She’s taken to carrying out con jobs since her spy career ended and she tried getting the brooch by pretending to be the happy girlfriend for McCarthy. Then he broke with her and so she decided to kill everyone standing in her way. And she was heading to Costa Rica when the team arrested her.

Inga didn’t even try to hide what she did. She confessed to the murders and the theft, but it was until they had finished wrapping up this case that the rest of the team finally saw Gibbs. Gibbs came back with his old haircut and a nonchalant attitude. He was feeling better than ever since his conversation with Grace and she convinced him to carry on as usual. He wasn’t going to confess and he wasn’t going to retire either. Gibbs had thought about it and he loves the job.

Gibbs came back and no one on his team confronted him over what happened, but he did find out that there was an issue with Fornell and he rushed to his friend’s side.