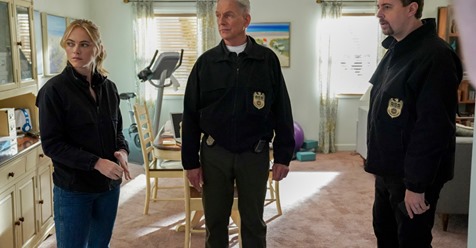 Tonight on CBS NCIS returns with an all-new Tuesday, October 22, 2019, season 17 episode 5 called, “Wide Awake,” and we have your weekly NCIS recap below. On tonight’s NCIS season 17 episode 5, “Wide Awake,” as per the CBS synopsis, “NCIS investigates Marine Corporal Laney Alimonte after evidence suggests she murdered her neighbor while being treated for insomnia by a hypnotherapist. Also, Gibbs befriends his new neighbors after the 9-year old’s baseball crashes through his window.”

NCIS was used to the odd ones. It’s what they’ve come to expect by now. They’ve each had long careers in this field and they believed they’ve seen it all. They even believed they recognized the situation with Marine Corporal Laney Almonte. The soldier had called them when she found a gun in her fridge and she claims not to know how it got there. The team suspected she might have been on drugs and that it could explain why she was both moody and forgetful yet there was also blood found on the gun.

The blood didn’t belong to Laney. Laney didn’t have any visible wounds on her and she also claimed not to have left her house in a while. According to her, she found the gun the first thing that morning and so she hadn’t gotten the gun from anywhere. Laney says it wasn’t hers. The team ran a search on the gun and it was a registered weapon. It belonged to someone named Joe Cortez. Cortez lived a few miles from Laney and so the team went there to ask the guy about his gun. And instead, they found his body.

Cortez had been dead for hours. He was killed sometime during the night and the evidence at the scene didn’t make sense. All the evidence pointed to Laney. She didn’t have an alibi for the window of opportunity and her fingerprints were found on the gun. It also didn’t help that she has such a checkered past. She was on the brink of being thrown out of the Marines for psychological problems. She took meds to deal with her issues and there was so much of it in her cabinet that she never would have been able to wake up the next morning. And yet she didn’t take her meds.

Why didn’t she take her usual doses? Laney said she was seeing a new doctor and that this hypnotherapist had given her one on one session that very night over a video call. Laney said the doctor hypnotizes her into falling asleep. She then fell into such a deep sleep that she went without her meds and woke up the next morning happier than she ever felt. If something happened while she was asleep, she said that it must be the doctor’s fault. The same doctor she believed hypnotize her into murdering someone.

Laney was willing to admit she may have killed someone when she saw the evidence. She also said she couldn’t have killed someone of her own free will because she wasn’t that type of person and so she blamed her doctor. She said her doctor hypnotized her into murder. It sounded crazy, but the team did investigate it and they investigated Dr. Pershing as well. The doctor has a long career as a hypnotherapist. He helps people through hypnosis and his clients seem to like him. And Laney liked him until she started to second-guess their sessions.

Laney claims not have known Joe Cortez. She doesn’t know how to got to his place or how she got his gun or why she killed him with his own weapon if she was just going take it with her. Laney didn’t know the answer to anything. She thought the agents would have better luck with Pershing and they did. The doctor had told them that he couldn’t hypnotize anyone into committing a crime. They later found out that he had been accused once before hypnotizing his roommate into stealing beer from a convenience store.

The team soon brought him to question him about that incident. They wanted to know why he didn’t mention it from before and he said that other incidents didn’t matter because it wasn’t his real. He did use to practice hypnotizing his college roommate. It was also done with the other man’s permission and Pershing his roommate had only hypnosis because he tried to push the blame onto someone else. Pershing couldn’t have hypnotized anyone into a crime. Not then and not now. He claimed he was innocent and that was step up from Laney.

Laney truly believed she had killed Cortez. She didn’t suspect anything different because the agents said all the evidence pointed to her and they left out the part about this being their initial conclusion. The team had been so desperate to prove Laney was innocent that they double-checked their evidence and saw that it was flawed. Laney’s prints on the gun were skewed. As if someone had merely staged the fingerprints by putting the gun in her passed out hand and there was more. There were peanuts.

The crime scene was littered with peanuts. Cortez had them all over his apartment and that alone showed Laney never stepped foot in there because she was deathly allergic to peanuts. Someone had clearly framed Laney for Cortez’s murder. She didn’t know anyone with a motive and so this time the agents paid attention to Cortez’s life. They found out that he did have an enemy. He was seeing a married woman and this woman was concerned about her husband finding out about them. She said her husband would kill Cortez if he had found out about the two of them.

Her husband was is Roger Pozniak. He has an appointment with Pershing right after Laney and so he heard all about her problems through the thin walls. He then used that to frame for the murder of his wife’s lover. But Pozniak has OCD. He couldn’t take the mess and so the team threatens him with one if he didn’t write down how he did it.

Pozniak eventually confessed to everything and this freed Laney.

She was also wasn’t going to be fired anymore because the military was reconsidering how it handled those dealing with mental illness.