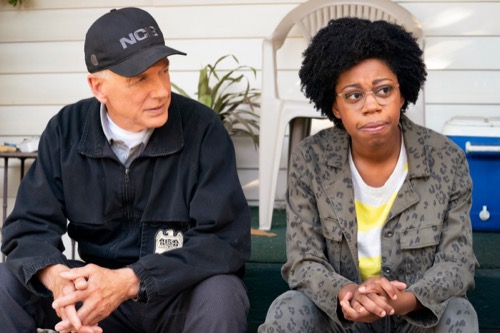 Tonight on CBS NCIS returns with an all-new Tuesday, November 5, 2019, season 17 episode 6 called, “Institutionalized,” and we have your weekly NCIS recap below. On tonight’s NCIS season 17 episode 6,“Institutionalized,” as per the CBS synopsis, “A petty officer’s son is found murdered at his “welcome home from prison” party and the evidence suggests Kasie’s lifelong best friend, Dante Brown, is the suspect.”

It was another unusual one for the team. They were called in to investigate when a servicewoman’s relative was murdered at his own welcome home party. The victim’s name was Kendall Quichera. He went by the name Trey. Trey was given twenty-five to life for his part in an armed robbery and surprisingly he was released early. Trey ended up serving only seven years. He told his family that he became a new man in prison and that his whole world view had changed. Only Trey was suddenly flushed with cash. His old criminal buddies didn’t know how he got his hands on the money and so they suspected that he might still have had a finger in criminal activity.

The team carried out their investigation either way. They learned that Trey had been murdered by someone wielding a shiv and that he wasn’t the model citizen his family thought he was. He had started fights in prison. He was even thrown into the hole for bad behavior. Trey was as far from the model citizen as humanly possible and so his early didn’t make sense. The team was still trying to figure out why Trey was released when Kasie came back with her findings. She said the hair found on the victim belonged to a dog. And as luck would have it there was a dog walker that Trey had had a beef with.

Dante Brown and Trey were in prison at the same time. It was even rumored that Trey had stabbed Dante with a shiv and so it would be understandable if Dante wanted revenge. He was a dog walker so he had dog hair all over him at all times. He also would have found if not created his own shiv to return the favor to Trey. The team knew they needed to talk to him and they went to his house hoping to get answers, but they didn’t think they would run into Kasie. Kasie carefully negotiated Dante’s surrender and so the team had questions. They later demanded answers from Kasie and so she revealed that Dante was an old friend.

Kasie swore Dante was innocent. Then she heard that Dante met Trey at a bar several times and that he was one of the last few people to see Trey alive. Kasie had still wanted to believe Dante despite what she heard. She didn’t feel comfortable about testing his hair because she said they didn’t have a sample to test it against and so Gibbs pushed her to test it anyway. He believed they had a credible suspect in Dante. They also had Dante on a parole violation for meeting with Trey and so they already knew that Dante was guilty of something. They just didn’t have proof he was guilty of Trey’s murder.

It all goes back to the fight in prison. They asked Dante about it and he claims he didn’t happen. He said he wasn’t stabbed by Trey in prison. He said the police report got it wrong and that he and Trey weren’t enemies. Trey had reached out to him after prison because Trey had wanted someone who knew what it was like. Someone who experienced prison. Trey was feeling lost when he got out and that’s why he turned to Dante. Dante was a great guy. Everyone who knew him said so and his track record was only long because of parole violations. He was caught with fireworks which got him two years. He did a wheelie on a bike and got six months.

Dante’s original charge was crap as well. He defended a kid that being beaten up by a gang and the police arrested him because they automatically assumed he was a thug. The witnesses were too scared of the gang to testify in Dante’s favor and so that’s how he got six years for being helpful. The boy he had saved had also been Kasie’s baby brother. Its why she was so close to Dante now. She blames herself for Dante going to prison the first time around and she felt guilty about the trumped-up parole violations that saw him keep going back there. Kasie was so much in her feelings that she missed some warning signs.

Kasie watched Dante’s interview. She automatically believed every word he said and she told the team that they could trust his word as well. The team, however, knew the real world didn’t work that way. They couldn’t just trust someone to be truthful. They had to investigate and so they went back to Dante’s place so that they could test his dog. They wanted to run the dog’s hair against the sample from the victim. Kasie went with Bishop to do the test and while she was at Dante’s she spotted a shiv under the dog’s bed. She didn’t tell anyone else about it at first because she wanted to be the one to test it. And unfortunately, the test proved the shiv was the murder weapon.

Kasie came forward with what she found. She soon asked Gibbs for the chance to say goodbye and that’s not what she really went in there to say. Kasie had asked Dante about his enemies. She believes someone with a grudge against him had set him up for murder and so she had him write down everyone with a grudge. Kasie also had Gibbs backing her because Gibbs was willing to take a chance on her. Gibbs wanted to believe Kasie wasn’t wrong and so he had his team keep investigating the matter. They searched the security feed at the prison and they soon found evidence of Trey being the one to stab Dante with a shiv.

Dante had lied to them earlier. He said the fight never happened and it did. He had a motive, means, and even the murder weapon. The team told Kasie everything they found because they wanted her to open her eyes. They thought she was backing a losing horse. Kasie wanted to see the good in Dante because once upon a time he had been a good kid except he wasn’t a kid anymore. He was a grown man who has been in and out of jail for most of his adult life. Dante chose to lie of his own accord. He didn’t have to lie about something that so easily could be proven and so he did it because he thought he could hide his past.

Kasie later went to see Dante in prison. She confronted him with the evidence and demanded to know why he had lied to her. His supposed enemies each had alibis. He had hidden his motives and yet Dante was still claiming his innocence. Only Kasie couldn’t easily believe like before. He had lied to her and that was the first time he ever did that. Kasie knows now that she couldn’t trust Dante to be truthful. She was just about done with him when she finally received good news. Dante’s dog hair didn’t match up with what they found and so that had been a silver lining. There was also the prison phone calls.

Gibbs had had Bishop listen in on the phone calls at the prison. He wanted to be thorough with this case because of Kasie and so he had Bishop going through every phone call from the prison. It was dud in the beginning. Then Bishop heard that Trey was a smuggler with someone at the prison and so that reaffirmed Kasie’s faith in Dante. She tested all the dogs at the prison and she found out one of them matched what was found on the killer. Kasie also found a link to a guard. The guard had been using Trey to smuggle in drugs and he killed Trey when Trey stopped being useful. And so Kasie had been right all along.

Dante was innocent. With Kasie and the team backing him, they were able to get Dante released and they charged the guard with murder. The guard was now going to join the same people he used to patrol. Dante meanwhile was ready to put the whole mess behind him. He had a job interview at the kennel that he almost missed and so it’s a good thing Kasie had rearranged it for him.

And while no one had been looking, it turns out Torres has been secretly dating someone for the last couple of weeks.