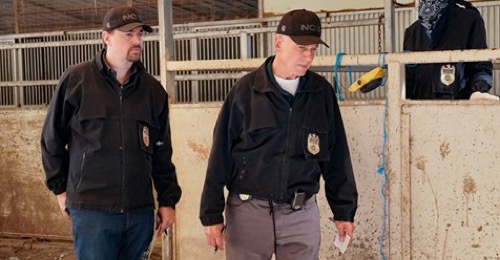 Tonight on CBS NCIS returns with an all-new Tuesday, November 12, 2019, season 17 episode 7 called, “No Vacancy,” and we have your weekly NCIS recap below. On tonight’s NCIS season 17 episode 7,“Institutionalized,” as per the CBS synopsis, “While investigating a Marine’s murder, the team uncovers a labyrinth of live-streaming spy cameras hidden in the rooms of a Virginia motel.”

A family visited a farm for a nice day trip. The children had complained about it because they would have preferred Disney World and so their mother basically forced them to go look at the pigs. She wanted them to see nature in action. She didn’t think they would see the pigs eating a person or come away from the encounter perfectly traumatized. They ran to their mother and she called the authorities. Later on, the authorities called NCIS because the victim had a Marine tattoo and no other identifiable trait.

The pigs went to town on the victim. He didn’t have a face or hands and so the tattoo was really all they were working with. It was until the team entered the pen that they received further information. Like how the victim didn’t die there. He was moved postmortem and so someone was trying to use the pigs to dispose of the body. It was pretty ingenious of them. The pigs would have left behind only hair and teeth once they were done and so this victim could easily have disappeared if it hadn’t been for that family.

The team also found a motel key. They traced it back to the right motel and they checked out the victim’s room. They thought they would find something that would give them a name, but instead, they found something more sinister. They found someone had messed with the entrance to air vac and so Gibbs followed it. He followed it until he was in the vents and saw that someone had set up cameras. The cameras were situated in such a way that it was clear they were filming other guests at the hotel.

There were cameras above every room. It was like the entire motel had been turned into a voyeur’s dream and so what they had on their hands was a sophisticated pervert. It wasn’t the owner of the hotel because he says he just bought the place less than a year ago. He bought it from and an old guy who retired to tropical weather and that didn’t sound like a guy who knew his high-tech stuff. The current owner did have some priors with positions. It just wasn’t anything recent and so that brought the team back to the victim who was thankfully identified through DNA.

The victim’s name was Master Gunnery Sergeant Aaron Shaw. He was married with two kids and he seemed like an upstanding guy on paper. There was nothing in his background that showed he could have been a pervert, but the evidence did point to him. There were traces of fiberglass found in his lungs. It was the same kind of fiberglass used in the insulation at the motel and he could have only have breathed them in if he was up there in the vents. Then there was the whole secrecy deal. Shaw checked into a dirty motel when he didn’t live that far away and he hadn’t been having problems with his wife.

His wife didn’t even know he was that close to home. She thought he was doing something for work and technically she wasn’t wrong. The team believed Shaw created work for himself. They thought he’s been watching people at the motel because he’s been collecting blackmail material on them and so that explained the payment from a congressman. The team thought it was blackmail money. Its why they knew they needed to speak to US Congressman for Virginia Eric Riley. They wanted to find out what Shaw was blackmailing him over and in actuality, they learned that Shaw wasn’t the blackmailer.

Riley hired Shaw to find the real blackmailer. He said he stayed at the motel when he met a woman and they hooked up. He and the woman parted ways amicably, but then some began blackmailing him. Riley said he couldn’t go to the cops because he was in the middle of a campaign. He, therefore, turned to Shaw because he knew if Shaw could find Bin Laden then a mere blackmailer would be easy for him. Which is what happened. Shaw found the blackmailer and he was killed for getting too close.

So, the team carried out their investigation into this blackmailer. They looked into everyone who accesses and the one name that stood out was Daniel Mulgrew. He was the installation guy. He also has a long record and he recently applied for a passport. The team suspected he could be their guy. They even went to his home in the middle of the night in order to catch him and they caught him alright. Just not before someone else got to him first. The team ended up finding Mulgrew dead. Mulgrew was killed in front of the screens he had set up and it was odd.

The team was sure they unplugged the cameras at the hotel. The fact there were still cameras set up meant Mulgrew must have planted those cameras long ago and he was reviewing all of the footage when he got the chance. This also meant the killer targeted Mulgrew while he was still working. The team later hacked Mulgrew’s accounts to see what he was up to and they learned that Mulgrew wasn’t even the real blackmailer. He was merely the blackmailer’s IT guy. Mulgrew sent several emails trying to back out and the blackmailer refused to release him.

The team then used those emails to find the blackmailer. It turns out it was Mulgrew’s former boss at the NSA. He used to work at the NSA and he was later fired from it for spying on his coworkers. His boss at the time should have informed the authorities. Only he didn’t. Patrick Norian chose to use the information he had on Mulgrew to blackmail Mulgrew into doing his bidding. This normally would have made Norian the prime suspect in two murders except Norian was out of town for both of them.

Norian couldn’t have killed either Shaw or Mulgrew. It had to be someone else and so the team went back to Shaw. They knew he reached out to people for help with his case. All they had to do was go back to it and that’s how they found his friend. Shaw turned to a friend to identify the woman that slept with the congressman. His friend has access to facial recognition and he later told Shaw that the woman in the video was Marinka Bazarov. She was a Russian Spy. She was also still sleeping with the congressman and he must have been trading intel with her.

Gibbs later ducked out early to mentor a young kid in his neighborhood and while he was doing that Bishop and Torres were starting to flirt with each other.