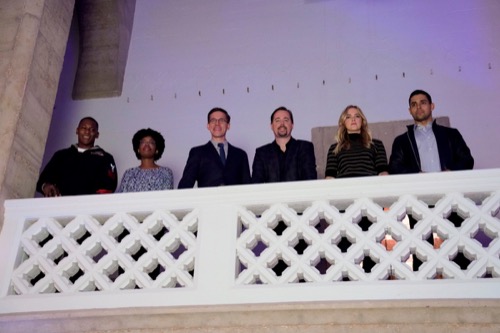 Tonight on CBS NCIS returns with an all-new Tuesday, November 19, 2019, season 17 episode 8 called, “Musical Chairs,” and we have your weekly NCIS recap below. On tonight’s NCIS season 17 episode 8,“Institutionalized,” as per the CBS synopsis, “The NCIS team investigates the murder of a musician in the Navy’s most elite band that performs at diplomatic events around the world.”

It was believed Navy Musician First Class John Warren committed suicide. He was on a bus with the rest of the Naval Choir when he began acting out of character. He was missing the beats in the song they were playing and he was unsteady on his feet. Some of his friends even noticed what was happening. They tried to ask John if he was okay and the next thing they knew he jumped out of the vehicle as it was still moving. John, therefore, committed suicide. There was no way he didn’t know that crashing out of a car on the highway wasn’t going to end badly and so that begged the question of why he did this.

John did have a history of mental illness. He told his superiors all about it and so they knew about his depression. They were, in fact, blaming themselves now for what happened. They thought they should have checked in with John to see if he was okay and so the team were going to investigate what triggered this latest episode, but it was revealed at the last minute that they didn’t have to. John’s death looked like suicide and it actuality it was murder. He was drugged with a fast-acting toxin. It explains why he was acting so oddly in the moments before.

There was also one other explanation for it. Palmer concluded that John’s antidepressants had reacted to the poison and so that gave John some clue that something was wrong. He probably felt so out of sorts. He died so horribly and it doesn’t seem like he was the target after all. John was poisoned by the reed in his clarinet. He had broken his and had borrowed one of his bandmates. She hadn’t even known about it. She didn’t know that her clarinet reed was the murder weapon until NCIS was knocking on her door and they were asking her about enemies.

Navy Musician Hannah McClain was in charge of the band’s touring schedule. She changed most of their bookings to Europe and a lot of people didn’t like it, but John did. He had never been to Europe and now he never will. Hannah was blaming herself for that when the team asked who else could has a grudge. Hannah thought about it and she mentioned there was a guy they call the “Nugget Creeper”. He was called that because he wears a baseball cap with a logo for Ned’s Nuggets and the creeper part came in because he was a stalker.

The guy followed their schedule religiously. He was always there when they landed and Hannah was nice to him at first because she initially thought he was just a superfan. It wasn’t until he followed them to every venue that she realized he was a stalker. Hannah stopped speaking to him and she does her best to ignore him when he calls out her name. Hannah had given the team a facial sketch and they used that to find their perp. Only the team was operating without Gibbs. He said he has an issue with a friend and so he gave McGee the lead on this case. And it was a little hard to investigate the creeper when they were worried about what Gibbs has gotten himself into.

Gibbs left everything behind. He didn’t take his money, his badge, or even his cell phone and so the team just know something is going down. They were doing their best to stay out of it because Gibbs would call them if they need them. So, the team was focusing on the case. They talked to the stalker and he had an alibi for the short window in which the reed was poisoned. He did, however, say that he had to protect Hannah and so the team asked him from what. What was threatening her? The stalker said that there was a secret killer band society within the band and that this society was in charge of several members disappearing.

The team had wanted to call this guy crazy. Then they followed up on what he told them and they learned there was a trail of bodies. The last three recruits for the band have all disappeared. No one has heard from them since they either quit the band or they went MIA and so the stalker believed Hannah was next. She was still a relatively new recruit. She was also invited to a secret meeting by her conductor and so the team had her sit it out while they went. They went to this meeting where they didn’t find a cult.

They found a private memorial service for John because the band wanted to pay their respects their way. It also turns out there was never a society and there was a reason behind the three disappearances. One died naturally, one was deported, and another was caring for his sick parent. The team wasted a day on a conspiracy theory and it was for nothing. Nothing the stalker said had panned out. The team thankfully still had Kasie and she gave them the lead. She found out the band’s equipment weighs more heavily than it should. She believed the equipment manager was a smuggler and Torres later found the evidence to back it up.

The manager was smuggling contraband through South America. He wanted Hannah dead because she would have taken the band to a Europe for a year and he would have lost millions of dollars. The team ended up arresting the manager and they even had time to attend the official memorial tribute to John.

By then, Gibbs had returned from his secret mission and he was there to talk Sloane through her own problems involving her biological daughter.