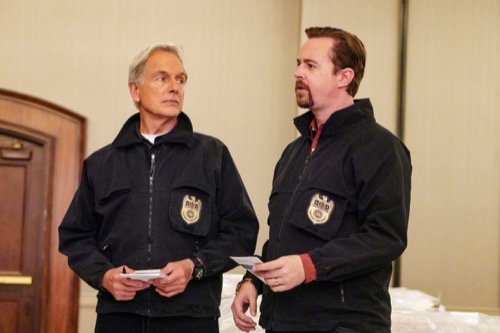 Tonight on CBS NCIS returns with an all-new Tuesday, January 8, 2019, season 16 episode 11 Winter Premiere called, “Toil and Trouble” and we have your weekly NCIS recap below. On tonight’s NCIS season 16 episode 11, “Toil and Trouble,” as per the CBS synopsis, “Secretary of Defense Wynn Crawford shuts down Gibbs’ murder investigation and demands that Special Agents McGee and Torres be arrested for their actions in the case.”

Special Agent Torres attended a conference called “Optics in Law Enforcement”. He hadn’t wanted to go to this conference and had been ordered to do it by a more senior agent. McGee was the one that was supposed to go and, while he made Torres go in his place, he couldn’t stop Torres from lashing or continue on with the conference with everyone believing he was McGee. So everyone at this conference thought Torres was McGee and they thought it was rude of McGee when he took phone calls in the middle of the conference. It turns out Torres had used the phone calls to claim that he had a sick child and so he was going to party with Bishop when they both heard a scream. The scream came from some bridesmaid that was hooking up with a groomsman and those two saw something.

What they saw was a conference room full of bodies on slabs. It had looked like the worst buffet ever and neither Torres nor Bishop were amused with what they found. The agents called it the crime scene and that’s what it became, but it seems they spoke too soon because the bodies were medically cadavers and so hotel manager demanded that her hotel be set to rights. She said that she had paperwork for all twenty bodies and that’s when Torres and Bishop said that they counted twenty-one. There had been twenty-one bodies in the conference room and only one of them didn’t have a tag or any footprint detailing where he came from. The body of the unknown man was taken to the morgue where they found out he was also lacking lungs to go with that missing name of his.

The team didn’t know anything about their victim or how he died, but they knew it wasn’t from natural causes and so they tested everything. They tested his blood and his cause of death revealed to be poisoned. He died from chlorine poison which had been outlawed at the Geneva Convention and was last used during nearly a hundred years ago. The team had no idea how the victim came into contact with it and so they turned to Kasie for answers. She had taken over for Abby and was proving to be really great at her job. Kasie later informed the team that chemical weapons had been stockpiled during the Cold War and that even with peace several countries still had access to it.

The United States was one of them. It was going to a long time and a lot of money to divest itself of all the illegal chemical weapons, so the US had hired companies to deal with it and the victim worked at one of them. The victim was identified, Keenan Grant. Grant had some low-level job and so the company said that he was never around chorine weapons or any weapons for that matter. Only Grant’s supervisor Dr. Patton Hartgrave was sure Grant couldn’t have gotten sick from his job. He and the company’s owner said that they had fazed out chlorine weapons and that there weren’t any left on the premises. And they also that any other questions would need to get past the Pentagon because the company has several contracts the Department of Defense.

The team and Gibbs especially had thought that maybe the company wasn’t being honest with them and so they tried to go around them. They went to the Secretary of Defense and they asked Secretary Crawford for his assistance on getting information on the company as well as the CEO thought they were turned down. The SecDef said that the team didn’t have enough evidence to gain access to the files they had on the company and he demanded that they stop looking into the company altogether. The team had been ordered to stand down and they realize they couldn’t do that until they found out what happened to Grant. Grant had been murdered and so the team thought the least they could do was hack the company’s records.

They had gotten video of Hartgrave logging in and so they used that to hack the chemical company’s servers. They got security footage of Hartgrave getting in the van with Grant and Grant driving off. So the team brought in Hartgrave even though they had been ordered to stop their investigation and so Secretary Crawford came to their office. He wanted to arrest the whole of NCIS for disobeying orders, but they talked him down using what they had learned. They learned that Hartgrave had lied to them and they brought him where he was interrogated. The man was sick from chlorine poisoning himself and he told the team that he was dying. Hartgrave claimed that he was dying for a good cause and they eventually got his motives. He admitted that he used some of the chemicals that were being stored rather than destroyed and that he handed them to Freedom Fighters.

Hartgrave said that the chemicals were on their way to Syria. He believed that his contribution would help take down Assad and so the team informed how easy it would be for some group on Isis to steal those weapons. They created a fake broadcast in which Hartgrave thought chemical weapons had been used on innocent people and that broke through his martyrdom. He gave them the information they needed to track down the weapons and so the team was able to stop a terrorist attack. They also found out that Trine Chemicals hadn’t destroyed the chlorine weapons like they said they did because they considered it to be expensive and just want to save a little money.

And so the team got Secretary Crawford to back down by telling him that they knew he was an investor in Trine Chemicals and that he was a close friend to the CEO.

Crawford denied any wrongdoing and had even apologized because he said he hadn’t been worried about his investment or his friend, but after he told NCIS they weren’t in trouble anymore, he contacted the CIA agent that was looking into Director Vance for Intel.