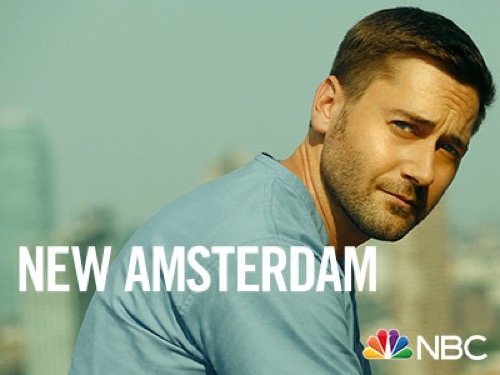 Kapoor grapples with the stigmas of aging, and Iggy has a successful day that inspires a life-changing idea. Meanwhile, Reynolds deals with an unreliable new intern.”

Tonight on New Amsterdam 3 months after the tragic crash, Max and Family are happy , healthy and welcoming baby duty. Max takes baby Luna to work with him at the hospital and he approves some new changes at the hospital for the care of patients. Dr. Reynolds is having some personal issues between him and Evie with him running around the hospital and her being away from home. Dr. Castro and Max review his medical condition and him coming closer to being cured of his cancer, he thanks her for saving his life. Max has a flashback to the tragic accident day and it’s chaotic but he snaps out and proceeds to help a new patient who he’s trying to help with insulin problems. Dr. Kapoor makes a shocking claim that he will come up with a cure for a patient’s rheumatoid arthritis. Max ends a contract with pharmaceutical companies insulin and vows to make his own affordable to patients who can’t afford it and this causes conflict in the hospital. Flashbacks of the accident continue and some doctors and nurses are in mourning as they remember two of their own losing their lives that day. Dr. Reynolds is confronted by Michael an intern he fired for being late, in the operating room, he tries to make his case on why it was a mistake to let him go. Max holds a press release on his insulin mission to make it more affordable to patients.

Dr. Castro uses the therapy she’s been giving Max against Dr. Helen for letting her go as a bargaining chip to her employment back at New Amsterdam she pretty much says she’ll walk and not help him if she isn’t offered a position on Dr. Helen’s team, and it works. Dr. Kapoor continues his search for the cure on arthritis. Dr. Reynolds has a change of heart towards the intern Michael and lets him stay and vows to challenge him and push him to be great as he gives him another chance. Max loses his battle against the pharmaceutical company but has a small win for his patient’s insulin problems. Dr. Laura is welcomed back to the hospital after her injury from the crash. Dr. Kapoor is having hard times trying to find a cure for his patient’s arthritis, he begins to question himself, but then has a breakthrough and finds out why medications weren’t working it was due to a tooth infection his patients had that was blocking the medication for arthritis from working. Dr. Iggy has quality time issues at home with his children and husband and tries to race home to his family to help out, and brings the new home that he wants to adopt another child. Max goes home to Georgia with baby Luna but in his flashback to the tragic accident day, we soon learn that she has passed away in the accident and that he’s been having visions all along of her actually being there but in reality, she’s not.