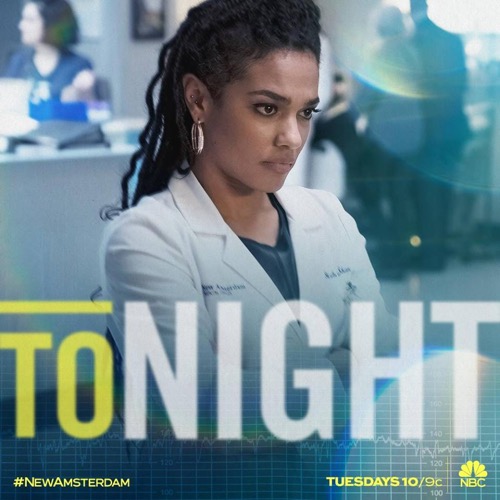 Tonight on NBC New Amsterdam premiere with an all-new Tuesday, January 22, 2019, season 1 episode 12 called, “Anima Sola,” and we have your New Amsterdam recap below. On tonight’s New Amsterdam episode as per the NBC synopsis, “Tensions are high in the hospital as Bloom is overruled on a diagnosis. Meanwhile, Iggy notices that something may be amiss with one of the hospital’s most respected surgeons.”

Make sure to bookmark this spot and come back from 10 PM – 11 PM ET for our New Amsterdam recap. While you wait for our recap check out all our NCIS New Orleans news, spoilers, recaps & more, right here!

Max was experiencing chemo nausea. He thought that he would have a few days before nausea kicked in and so he figured he must be special because it came early for him. Max hated being sick and he didn’t want anyone at the hospital to see him that way. Therefore, he ignored his symptoms because he thought he could just push through them and surprisingly it worked for a while. He was a normal self as he went around the hospital putting out fires and ensuring that the doctors got what they all needed but eventually the sickness did catch up to him. Max would have to rush to the bathroom because he wasn’t feeling well and that could only work for so long before someone figured out he wasn’t well. And so he went to Sharpe for help.

Sharpe could prescribe some anti-nausea medication that would help himself stay on his feet and she didn’t have a problem with writing him a prescription, but she also warned that it was a temporary solution. She said that his radiation was going to be aggressive and that he will have to take care of himself. Max said he’d remember to take it easy only he hadn’t been telling the truth. He was still trying to do the job when he needed the bathroom and Iggy came to him with a problem. The problem as it turns out was Dr. Marovitch. He was getting up there in age and his hands weren’t as steady as they normally wore. Iggy had noticed it when he was having lunch with his friend and he had been forced to report him.

Max said he would handle it and he tried to. He really did try because he asked the doctor to his office and informed Marovitch that the doctor would have to go through a medical evaluation. These evaluations were routine and so it shouldn’t have worried the doctor, but he claimed that the evaluation was supposed to happen every two years and that his last one had been last year. He said that he didn’t need another one and Max disagreed. Max said that it was best that get it out of the way and so Marovitch realized something was up. He knew that Max was trying to question his fitness in surgery and he wanted to make a point. He moved up his surgery that was scheduled for tomorrow to today in order to do the surgery before anyone found out about his hands.

Thankfully, Iggy had noticed that his friend did this and he again reported him to Max. Max walked in as Marovitch was prepping for surgery and he told him that he was going to go in there in with the team. Max was willing to stand at Dr. Marovitch’s shoulder to evaluate him during the surgery and so the doctor stopped pretending. He quit the surgery and he more or less called Max a hypocrite because Max gets to continue working while the tremor in his hands ended his surgical career. The doctor didn’t understand that he had been benched because it was best for the patient and it was why he thought Iggy was to blame. Iggy had reported him and so Marovitch lashed out his friend for getting in the way.

Iggy ended up feeling so bad for him that he went to Max and fought for his friend. He said that Marovitch has been at the hospital for decades and how the doctor could still be of use because it wasn’t fair for the doctor to lose everything. Iggy had made such a case against ageism that Max said he’d find a solution. But then someone else came to him with a new problem. Dr. Kapoor has a patient with crap insurance and who couldn’t have traditional surgery because she couldn’t have anesthesia. Maren Thompson went into full organ failure after the birth of her daughter and it was a miracle that she even still alive though her quality of life was affected. She had tumors and she couldn’t see. She actually never sees her daughter because she’s blind since waking from her coma.

The treatment to help her she was considered to be an elective surgery and so that’s why her insurance didn’t want to pay for it, but New Amsterdam as a hospital really couldn’t help. The hospital didn’t have the necessary machine to get Mrs. Thompson through her surgery and so Max suggested they use one at their sister hospital. This other hospital had the machine and the surgery could be carried out there as well. There was just one condition. Max knew that Kapoor didn’t have privileges at this other hospital and he, therefore, suggested that they use Dr. Merritt credentials. Dr. Reynolds had taken over Merritt’s position and he wouldn’t have to lie. All he would need to say was that he was the head of the Cardiac Surgery Department and that everyone would go on to believe that he was Merritt.

It was a risky move, but it paid off because the patient received her surgery and she got to see her daughter’s smile at the end of it all. Only there was always another fire at the hospital. Max had to intervene when Sharpe and Bloom disagreed about what was making a bunch of fruit pickers sick. It had looked like Hunter’s virus-like Sharpe suggested and so Max decided to go with her form of treatment. The patients were given antivirals and it wasn’t making them any better. Sharpe figured that their condition must have been too advanced however Bloom decided to follow her gut feeling and she later locked Sharpe out of the patient’s room while she treated one of the pickers. She believed it was drinking unfermented wine that was making everyone sick and she had been proven right in the end because her form of treatment actually worked out for the patient.

But being shown up like that just further deteriorated Sharpe and Bloom’s relationship. The two women realized they couldn’t work together and what’s more is that Sharpe went on to report Bloom for being an impaired physician. Meaning not long after Max finally realized that Marovitch could act as a teacher with their sister hospitals and help teach a new generation how to carry out some of the toughest surgeries, that he was forced to contend with a new doctor that needed to be reevaluated!