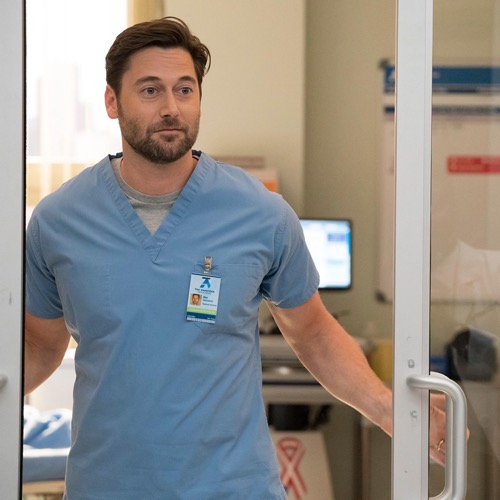 Max runs through the city with Baby Luna in her stroller. He makes a pit stop at the courts. He is invited to play with some of the guys. A teen girl offers to watch Luna on the sidelines. Max plays for a while before Luna cries. On his way out the teen girl’s father drops. They rush him to the ED.

After Iggy carries on about his problem and then figures it all out on his own, Vijay is able to get in a word. Ella is having a baby.

Laura is in pain. She’s been fighting against it. She heads to PT but ends up making out with her doctor, again.

Max visits Marquis, the father who dropped on the courts. He tells him he has hypertension. Marquis is surprised. He eats healthy and works out. But he hasn’t seen a doctor. Why would he, after all, he is healthy. This gets Mad thinking. He heads out to the local barbershop and offers to check blood pressures once a week. The owner is leery at first but agrees.

Laura sees a young boy with a head injury. He became upset over his homework and begged his head against the wall.

Helen meets with a patient named Molly who is on her seven trial run with new treatments. They aren’t helping her. Helen goes to visit her doctor who doesn’t see it as a problem.

Iggy meets with Laura’s patient. He asks the boy to tell him what happened. The boy tells him how he gets frustrated with school work.

After educating Marquis about his heart condition, he finds Marquis on the ground in front of the hospital.

Max gets kicked out of the barbershop for scaring the guys with talk about PEs and diabetes.

Marquis’ daughter tells him he is going for the weak option if he doesn’t get surgery. He agrees to do it.

Max asks Floyd to go to the barbershop, maybe he can get them to listen.

Floyd tells Max he doesn’t think he can change the minds of the men at the barbershop. Max thinks he knows who can.

Iggy and Vijay discover the young boy has lead poisoning. The city officials who test are backed up so they head to the house to test. Vijay finds lead outside on the ground of the boy’s home from the old overpass. It looks like the entire neighborhood is in jeopardy.

Max goes back to the barbershop to ask for a cut. The owner is annoyed, he has been taking shots all day. He sits for a cut while they talk. Max thinks the owner can help.

Iggy and Vijay bring the Deputy Comptroller in to see all of the patients they are treating from the neighborhood. The comptroller denies it all, telling them the lead could have come from anywhere.

Floyd calls Max into the OR. Marquis’ heart walls are thin and aren’t taking a stitch. He needs Max to prepare his daughter.

Helen meets with Molly who feels like life isn’t worth living anymore. She feels out of control. Helen leaves a bottle of powerful pain killers behind before leaving the room. Later, Molly’s doctor is angry with Helen. Milly checked out of the hospital.

Max sits with Marquis’ daughter for a while her dad is in surgery. Ella tells Vijay she might not keep the baby. Marquis makes it out out of surgery successfully. Max catches heat for teaching seven different barbershops on how to check blood pressures to help their fellow community members.