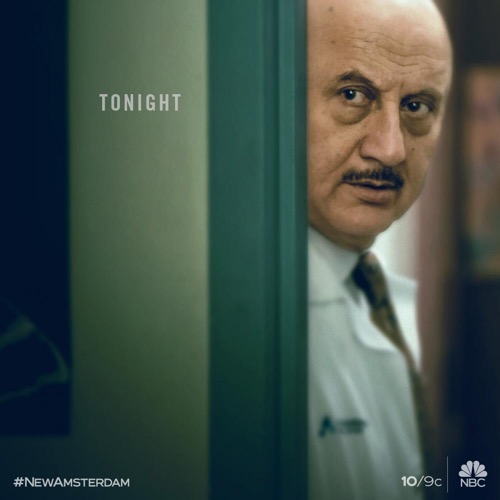 Max is seeing his dead ex-wife again in his house. She tells him she won’t leave until he wants her to. Meanwhile, Iggy gets a call from Roz that she has a baby for him to adopt. He’s caught off guard. Back at the hospital, two people in a car dump a woman on the ground before taking off. Laura rushes over and administers Narcan. The woman tells her she is in pain all over and to ask Dr. Sharp.

Helen comes down to the ED to see her patient who is part of the chemo program. The woman tells her she’s been in so much pain and that Percocets don’t help so she’s turned to heroin.

Vijay watches one of his residents tell a young boy and his family that muscle twitching he’s experiencing could potentially be from the onset of an MS. He shakes his head as she hasn’t even run any tests yet.

Max becomes very upset when a pregnant woman is brought into the ER. She’s having trouble breathing because she has a pulmonary embolism. One of the doctors informs them that the baby died en route to the hospital. Max breaks the news to her while holding her hand.

Later, Max sits with the woman and talks to her. The baby’s heart didn’t develop properly. They have to induce labor to get the baby out. The woman starts to cry. She tells him that it’s just her and the baby. She asks him to stay with her. He agrees.

Mack stays with a pregnant patient Gabi well she delivers her stillborn baby. The room is quiet and sad as Max asks her if she wants to hold her daughter for the first and last time.

After trying to get Gabi to hold her baby and she refuses Max brings her back to see her mother in a cuddle cot, a device that would give them more time to say goodbye. Gabi seems to want to spend some time grieving, after all.

Helen brings her patient to see her friend Omar who runs an illegal consumption site safely. Omar tests Shayna’s heroin for fentanyl before he lets her do what she needs to do to be pain-free.

Two medical staff come in to move Gabi‘s grieving process along because they need her room and the cuddle cot. This makes Max really angry. He tells them that Gabi can take as much time as she needs, putting a chair in front of her door so he can sit down so no one will interrupt her.

Floyd works hard to teach one of his residents the difference between promising something they can’t deliver to a patient versus giving them hope and still being supportive. Meanwhile, Laura wakes me from her surgery and begins to cry when she realizes she is alone while Helen is by Shayna‘s bedside as she comes to.

Vijay goes to see Iggy about Ella. Iggy tells him he can’t talk about her, it’s a patient privilege. Iggy tells him about his issues with Martin and how he hasn’t told him about possibly adopting a baby and that one is available for them. While talking about this Vijay realizes that his patient doesn’t have MS or another disease but the measles.

Iggy finds Max standing guard outside Gabi’s door. He pulls up a seat so they can talk. Max doesn’t want to let his wife go even if it means getting better.

Helen has brought Shayna back to the hospital and admitted her. A short time later the police come in and cuff Helen, taking her away. She is billed out later by her superior and is told that the hospital board will determine her future the next day.

Floyd comes to visit Laura who is feeling sorry for herself. He cheers her up with some takeout from Peter Lugar‘s. Her dad used to take her when she was younger. They sit and eat steak.

Gabi tells Max that she feels abnormal, a little crazy she doesn’t want to hold her baby. She wonders if she needs help mentally. Max tells her about his situation and how he still talks to his dead wife because it makes him feel better. It’s a way he keeps her alive and a part of the memories she’s missing out on. He doesn’t care if it’s healthy.

Martin has found out about the baby and the adoption. He is really upset with Iggy. Meanwhile, Ella comes to Vijay to tell him she’s keeping the baby after all. Gabi works up the courage to hold Sophie one last time.